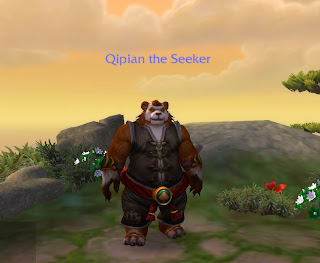 While World of Warcraft players have been busy with the Battle of the Barrens and other places, earlier this month there was some news that Blizzard would be testing out something never done before in the game - allowing players to gain experience faster by using real money purchases.

The buying of game items, or "micro-transactions," are not new to gaming, or even to WoW. Some smaller Internet games such as Evony allow players to purchase a variety of buffs, better equipment, etc. As these purchases give the buyer an advantage over free players, they are sometimes called "Pay to Win" games. Larger MMOs have tended to avoid such offers, not wanting to give loyal players who've gamed a long time the impression someone can just buy their way to the top and avoid the time and hard work in getting there. Instead some, WoW included, offer the sale of items that do not affect gameplay, such as mounts and pets.

In Summer 2011, Eve Online players protested plans to allow the purchase of items that would affect gameplay, and eventually the company relented. "It's one thing to add non-game items and make money off that," one reader wrote, "It's another entirely to screw up the whole game mechanics so that veteran players who've worked a year to get where they are get bumped by some snotnosed kid who's using Daddy's credit card to buy his way to the top."

Earlier this month, Blizzard forum moderators admitted to plans to "exploring" options after it was discovered there were plans for items to be sold at an "in game store," such as an "Enduring Elixir of Wisdom" that gave a 100% experience boost. The store will reportedly be only on Asian servers at first, and the item is described as currently only on test servers and only available to players level 85 or more.

The response from the players was mostly negative, "The item itself is mostly harmless … the problem is that it opens doors to (the) 'Pay to Win' model. And we already pay the game and a monthy fee just to skip that." Some stated they would leave the game, or feared others would if the In Game Store was released. Some stated they wouldn't mind the option to level other characters this way once a player had brought one up to the maximum Level 90 anyway.

This comes soon after some less than happy news for World of Warcraft. In May, Blizzard stated they had lost more than a million players in the first three months of the year, from 9.6 million n January 2013 to 8.3 million in March. While most of the losses were from Asia (where the in-game store will be tested), some Western gamers left as well. This continues a long-term drop from it's peak of 12 million in 2010, and the company admitted further decline was likely, "we expect to have fewer subscribers at year end than we do today." The reasons for the drop, players were leaving for cheaper games, notably those playable on mobile devices. The video game industry, in addition to virtual words such as Second Life, has been facing increased competition from handhelds such as tablets, iPods, and others.

At the time, Blizzard stated they would be investing more in WoW, with more storylines and features. Since then, the Darkspear Rebellion was introduced. But that even the largest of MMOs would resort to "dabbling in the darkest gold-producing alchemy of them all" of microtransactions allowing those with deeper pockets an edge over conventional players, this could be taken as a sign that even the people behind World of Warcraft are wondering if it won't be long before they no longer dominate online gaming.