Eve Online: The (Goonswarm) Empire To Strike Back

Eve Online was once described as "Second Life's Evil Twin." While not a sandbox virtual world, players do have a lot of options in playing alone, or part of a group, to mind one's own business, or raid other players. What would be branded as "griefing" in Second Life can reap rewards here, and raiders can and will enjoy the "yummy tears" of the targets they've successfully demolished. One faction in Eve Online that's been around for years is Goonswarm. Supposedly, it was where a number of former Second Life griefers ended up when they got bored and left, heading to Eve. But it also had some men of obvious distinction, such as Vile Rat who was one of those killed in the terrorist attack on the US Embassy in Libya in 2012.

Factions often form alliances that can and will fight major wars over territory and resources, and sometimes revenge. But in early 2016 came what was billed as "The Largest PVP War in Gaming History." The biggest alliance known as The Imperium, led by the "Goonswarm Federation," threatened smaller alliances in low-security space with invasion unless they paid up protection money. But instead of giving in, some of these alliances formed a coalition and to the surprise of onlookers, the Imperium suffered a major defeat. As a result, old enemies of The Imperium "quickly came out of the woodwork," and what became known as "World War Bee" was in full gear, "with over 60,000 players around the world choosing sides." The fight has also been called "The Casino War" as the owner of an Eve gambling website began bankrolling the war effort against The Imperium. The result was a series of defeats for The Imperium as key stations were overrun and factions left it. The Imperium's strategy was to try and outlast it's enemies, then retake what they lost.

Finally on August 2, there was an announcement that The Imperium would be on the march again. And soon close to a thousand capital ships from Goonswarm moved to a strategic location close to two areas held by their enemies, sometimes called the "Moneybadger Coalition." The goal of the ships there seems to be to mainly harass the enemy for now by sending numerous lone ships to multiple hard to defend locations. "Massively" writer Brendan Drain felt, The Imperium's plan was a "highly aggressive" one, not to worry about losing the economic war, "relying instead on it's huge industrial and (cash) farming base ... to replace lost ships quickly. That sounds good in theory, but losing the (money) war on paper can give the enemy a huge morale boost and a reasonable claim to victory, even if they concede star systems and lose citadels.

The "Casino War" hasn't seen a fight yet on the scale of "The Battle of B-R5" in which over $300,000 USD worth of ships went up in flames. But in a game noted for not just massive battles, but suprpising political moves, backstabs, and drama, a lot can happen. About the only thing writer Drain felt was certain was, "with the game's largest and richest alliances involved, at the very least we can be sure that some very expensive stuff is going to explode."

On Monday July 31, Linden Lab finally opened it's new virtual world of Sansar. After visiting two of it's locations, my initial impression was the place had promise, but still needed a lot of work. Afterwards, I decided to look a little more for a better overall impression. 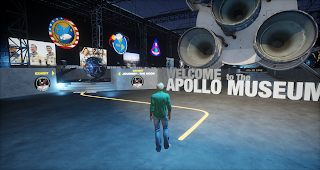 I would visit several more locations. One was highlighted in the Sansar Atlas: "Orgin Cinema 360." A second I had heard about in preview articles, "NASA  Apollo Museum" by LOOT Interactive. Two were from Maxwell Graf, "Respite" and "Rustica," the latter which was part of a preview video. Another was "Chess" by Lillani. Two more looked like places by less experienced builders, "Driveable UFO Bumper Cars" and the "Freebies Museum." And I decided to check the place done by SL video maker Draxtor Despress, "114 Harvest," and check Luskwood once again. 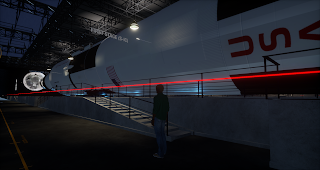 Of these four, the NASA  Apollo Museum I found to be the most impressive. There was a video screen with footage about the Apollo program, a display of a Saturn V rocket lying on the floor on it's side, and a display showing the path of the astronauts of the Apollo 11 mission took. For a someone interested in the space program, this would be very cool. Another detailed place was the "Orgin Cinema 360," which was described as a former arch-villain's lair now converted to more peaceful use. The center area was a 3-D panorama movie view, and stepping out, there was a detailed circular walkway. There was one moving object, a camera, that panned around. Below me were fans that whirled around. 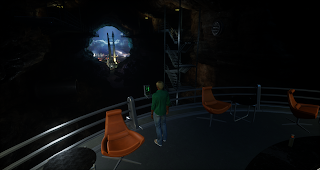 They looked good. But as a Second Life resident, I couldn't help but notice what they didn't have. There was no interactivity. There were seats at the Orgin Cinema, but you could not sit down. You were limited to inside the movie area and the walkway, and that was it. While there were objects in the distance, you could not get to them. Orgin Cinema also took quite a bit of time to load, much more than a normal teleport in Second Life. And while the Apollo area looked great, unlike Second Life, you couldn't click on something for more information. 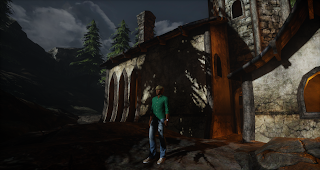 Maxwell Graf's "Respite" and "Rustica" had more room to walk around, and "Respite" had a very detailed,building, with a "rustic" look, the sound of a crackling fireplace. But you couldn't get up the stairs, and the sound of the fire was constant until you got some distance away from the dwelling, and then it was completely gone. I was about to walk around a while, but eventually I came to the end of the island. But once I got too far into the water, I "fell" down into some gray abyss. Rustica was a huge area of mountains and valleys. It looked less  like a detailed build and more about demonstrating how big an area in Sansar could get. 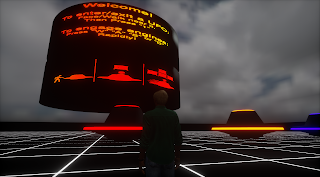 "Driveable UFO Bumper Cars" and "Chess" were small demonstations of what limited capacity for interactivity Sansar has at the moment. The first place was a gridlike driving area with several saucer shaped simple vehicles one could hop in by walking up to them, and pressing the "1" button. One could then "drive" the saucer by walking/pushing at it from the inside. I did notice it was possible to flip over the edge if you hit it hard enough, and pushing further, you would fall off into the abyss. After a few moments, you would respawn back to where you first appeared. With "Chess" it was possible to push against the pieces and move them. But when I tried to move one, I ended up moving a few, knocking over one. And there was no way to pick it back up. 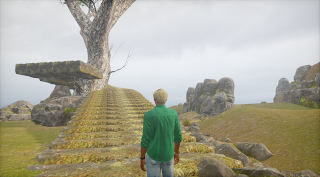 Two places I haven't seeing on the Sansar viewer atlas after the first day were it's Luskwood area and "114 Harvest" by Draxtor Despres. I contacted Tengu Yamabushi in Second Life about the area that had seemed little more than a simple rocky savana. He told me Linden Lab had taken it down temporarily, "Seems you're not supposed to use a logo for the thumbnai. Who knew? ... Supposedly there's a policy, somewhere, that says the thumbnail has to be an in-experience screenshot, and no logos. Of course, not knowing that, I created a bog-standard-template world. And since it had no unique content, then, (I) just slapped a LW logo on it.  My bad."

And why couldn't I see it in the atlas if it was back up? Tengu told me about one big problem with the viewer atlas, "It's very easy to miss in the Atlas. There's new stuff accumulating in there and there seems no way to filter/search for anything." Still, he had been doing a little more work on the place, "We have a tree now! : It's not much of a tree, but it's a tree. It's a 'Charlie Brown Christmas' (style) 'Luskwood' tree." When I was able to take a look later, there was a larger tree with stone stairs leading to a platform on it. 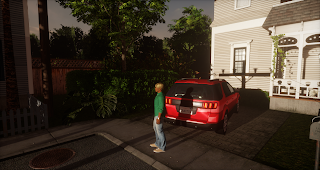 Draxtor has emerged as a supporter of Sansar, helping Linden Lab with recent promition videos. So I was interested to see what his place was like. But I couldn't see "114 Harvest" on the viewer atlas. Then I saw on the Moni's World blog an address to the place. Taking a look at the Sansar website, there was a search bar on it's atlas that was missing in the viewer. So I was able to locate a location that I had heard the location of. 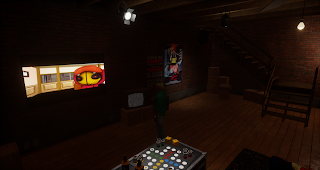 Checking "114 Harvest," I found myself in front of a house in the suburbs a car having the license place "DRAXTOR."  The front door was open, so I went in, and the only door inside open was the one to the basement which had a sign "First Lifers Keep Out." Downstairs was a couch in front of a TV playing one of his "Fluffee" videos from a few years ago, with a small radio room connecting. Back out of the house, I decided to look around, and fell through a hole of come kind, falling into the gray underneath. Down there was a rubber ball I could push around. The only form of interaction I had at the place.

In short, Sansar has a lot of potential, but there's not much to attract your run of the mill Second Life user. One big disadvantage is it's not that easy to hold events there. Tengu felt it's appeal would be limited among his fellow Luskwooders, "I'm not really sure how it will turn out.  We at Luskwood aren't really interested in 'experiences', we're first and foremost a community.  And I'm not sure how well the Sansar platform fits an online community. Two particulars: live music and collaborative builds, Primtionary, specifically. No way to do either right now in Sansar." 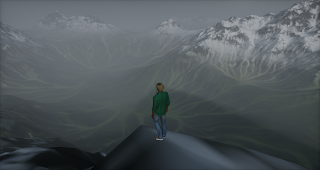 It should be noted Second Life was much different from how it is now to how it was on day one, or even how it was when it was a few years old from day one. It used to be everyone had to pay just to have an account or even to rezz a prim. Teleporting was once possible only through teleport hubs, and when you did it could be a mess with everything up your backside. It would be a long time before there was anything other than human avatars available. Second Life, while good, needed to be better. And eventually it was.

As for how many will use it? That's a question only time will answer. But when Second Life came around, there were only a handful of other virtual worlds that were unknown to most. Today, it's fair to say the majority with computers have at least heard of Second Life. So why aren't more using it? Perhaps it's bad publicity or it's not the kind of virtual experience they want, which Linden Lab seems to be thinking. Or maybe most computer users aren't that interested in virtual worlds that don't involve blowing something up.

So Sansar may just end up a much smaller alternative grid like InWorldz, with a few people and making it's owners a little money, but not much. Time will tell.