The Relay For Life Walk in InWorldz 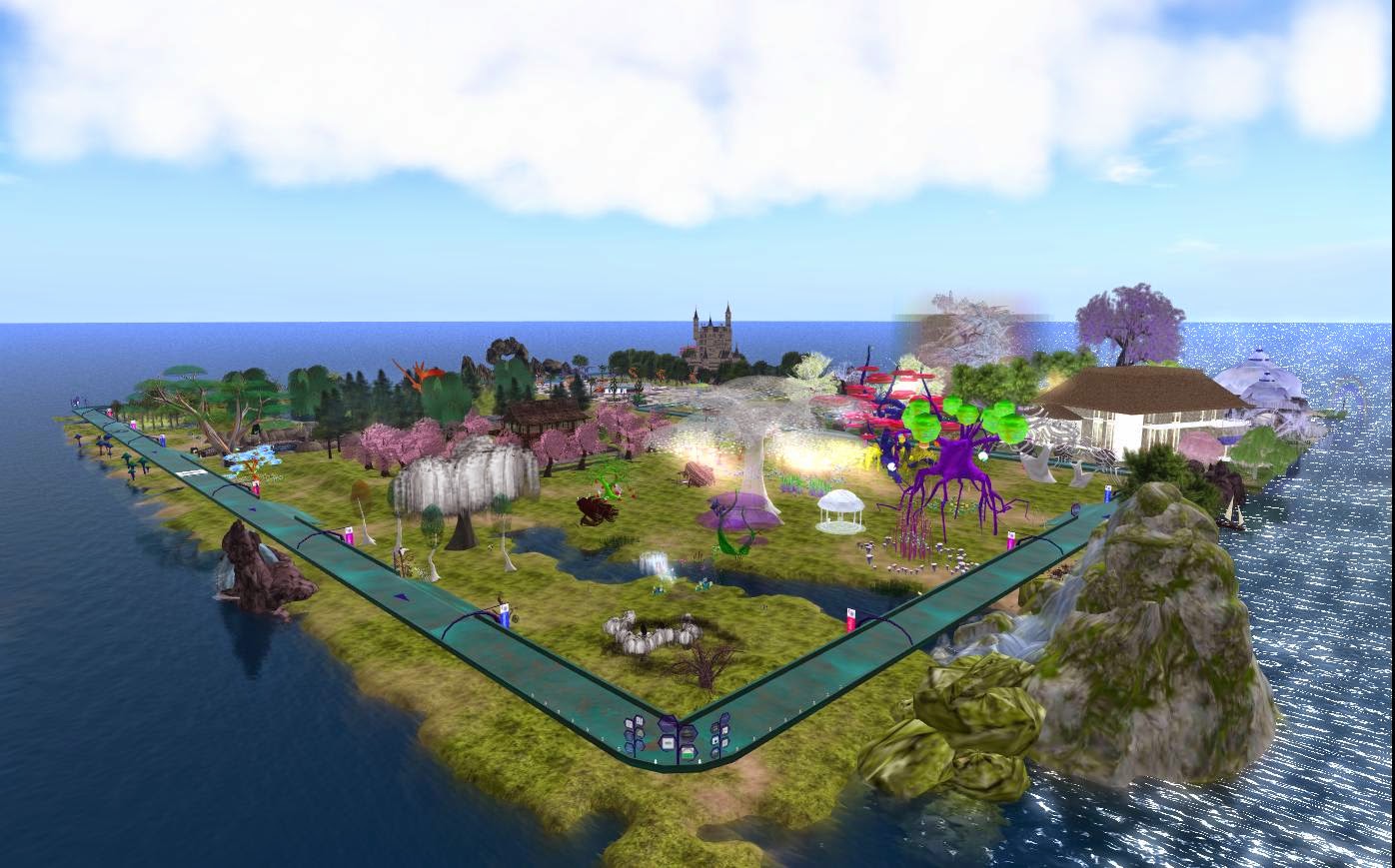 Earlier this year in July, Second Life held it's Relay for Life Walk, the high point of it's RFL fundraising season. Shortly after the Relay in Second Life came to a close for the year, it began on the InWorldz grid. After a few months of various events, came it's own Relay for Life Walk on Saturday November 1. 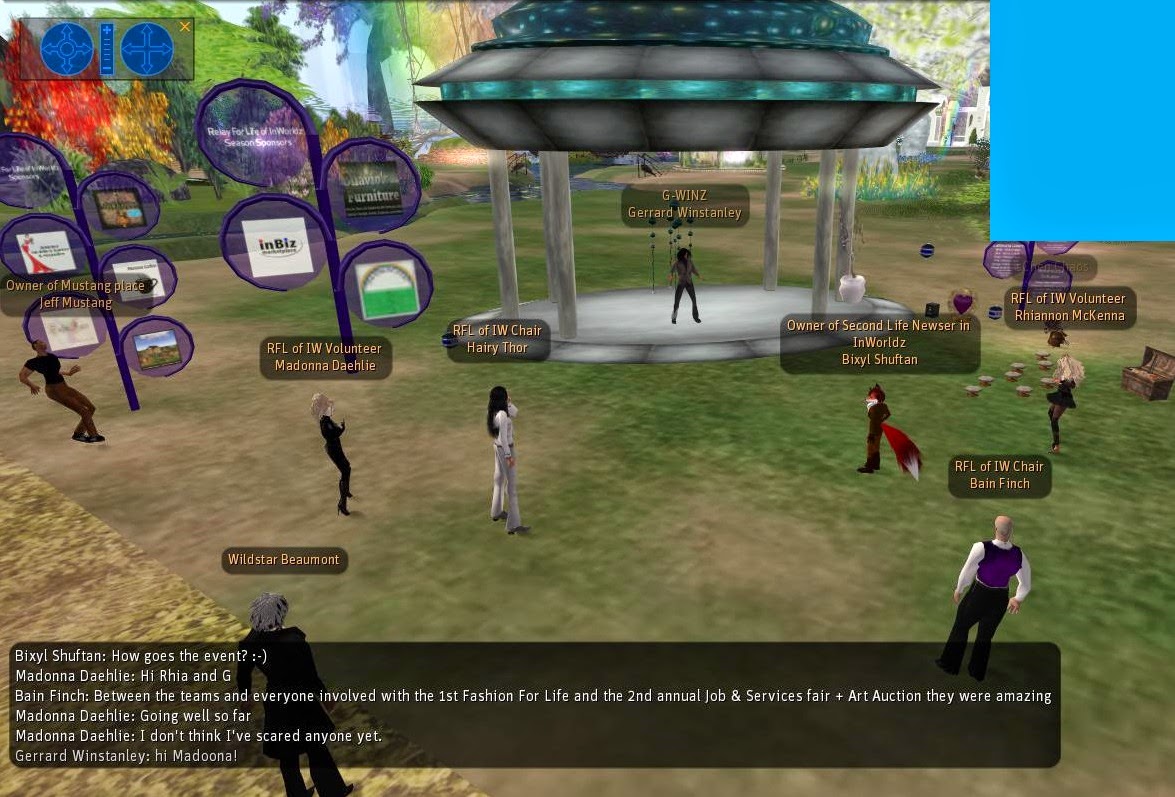 The event lasted for about 12 hours, from 9AM to 9PM (SL and IW time), and took place across four sims, Tiny Steps For A Cure, Muse Island, InBiz, and Bllavio's Furniture. "Having Muse Island been a godsend to be able to host ... events without occuring sim cost." I was told. This was one more sim in area, than last year. There were a number of Relayers from Second Life there, such as Oldesoul Eldemar, Madonna Daehlie, Wildstar Beaumont, and Bain Finch. 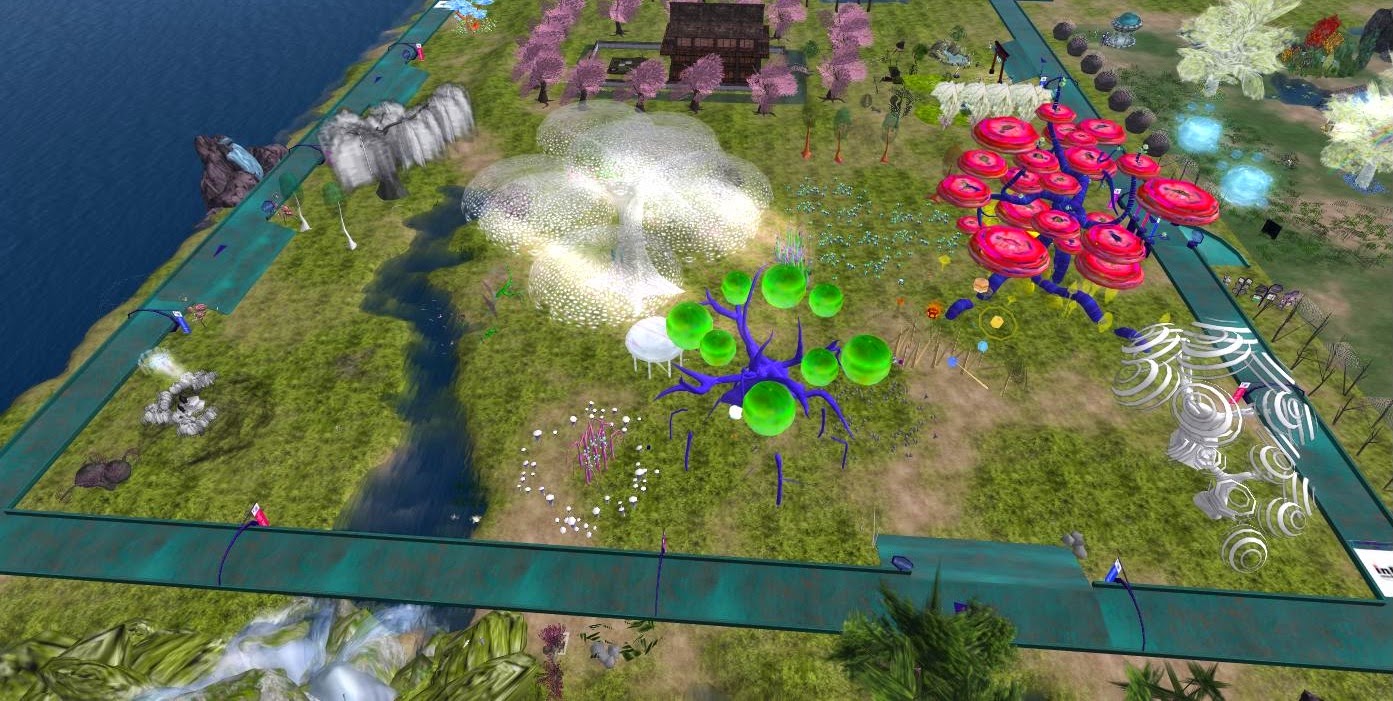 Unlike the track around a carnival build last year, this Walk resembled it's Second Life counterpart more, though was a little different.  The track going around the various exhibits, or camps, was raised a bit off the ground, accessible through ramps or by flying/jumping on it. 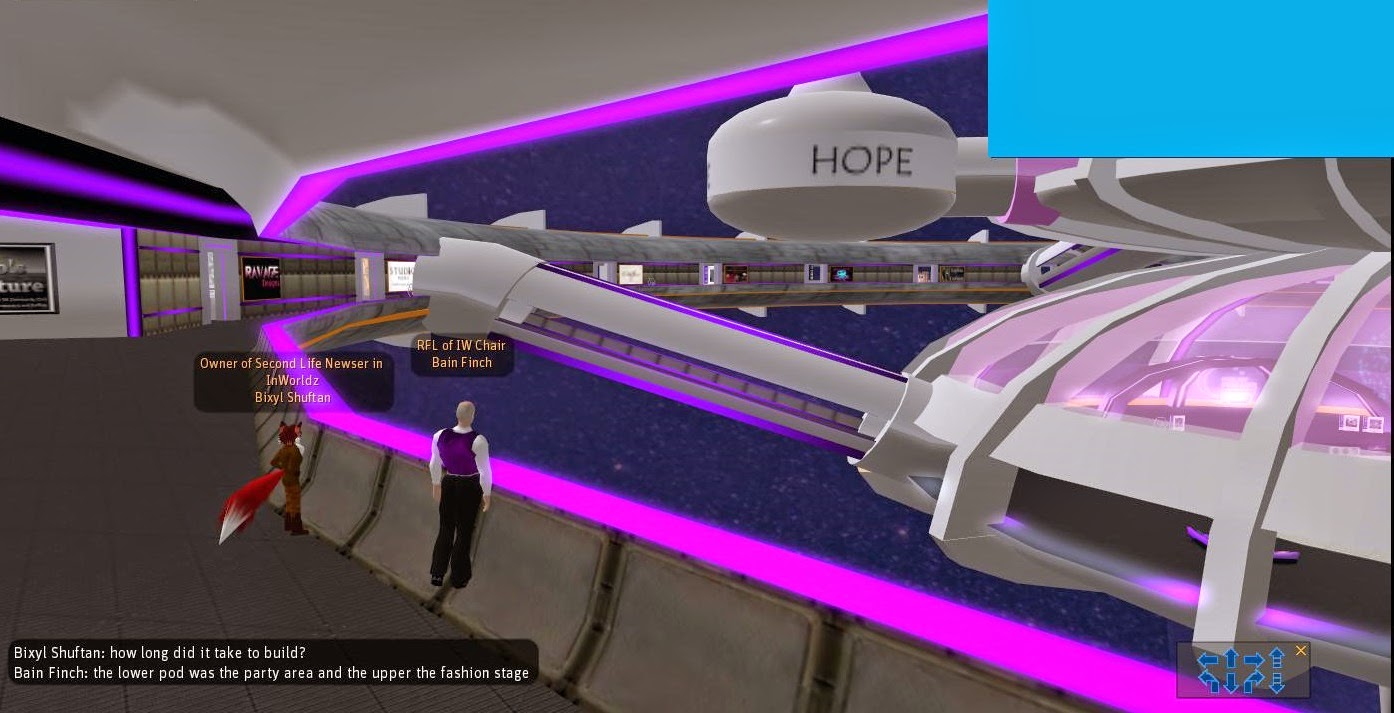 Bain Finch took me to the places where two previous major RFL in IW took place, the Fashion For Life and Job Fair. Taking me to the Fashion For Life space station, Bain told me it had been built by Logan Willow and took over a month, "He's been a sponsor of Relay from day one. ... We were trying to get some of the larger InWorldz groups take part. We had the two biggest agencies come together for the show and the Tinies also had a fashion day to help showcase their unique fashion. ... We had 3 fashion days, One for the host agency InStylez, one for New York Modelling Agency and the Tiny got together with the Dinkies for a show."

The Job Fair was in a simpler build, in a skybox high above Muse Island, Bain saying, "This was a dual event with the fair and Art Auction." Of the Job Fair, "It's a way to help promote IWz groups, businesses, land owners,etc. and help bring new people into RFL and RFL to their efforts to reach new members."

"Between the art auction headed by Ferrator Montoya, the job fair by Jillian2000 Quintessa and the Fashion For Life by Raven Dulce they raise 1/4 of our fundraising. Sadly the Fashion For life was Raven's last show as real-life forced her to close InStylez down. Llike always real-life comes first, and that been a rule within RFL too." 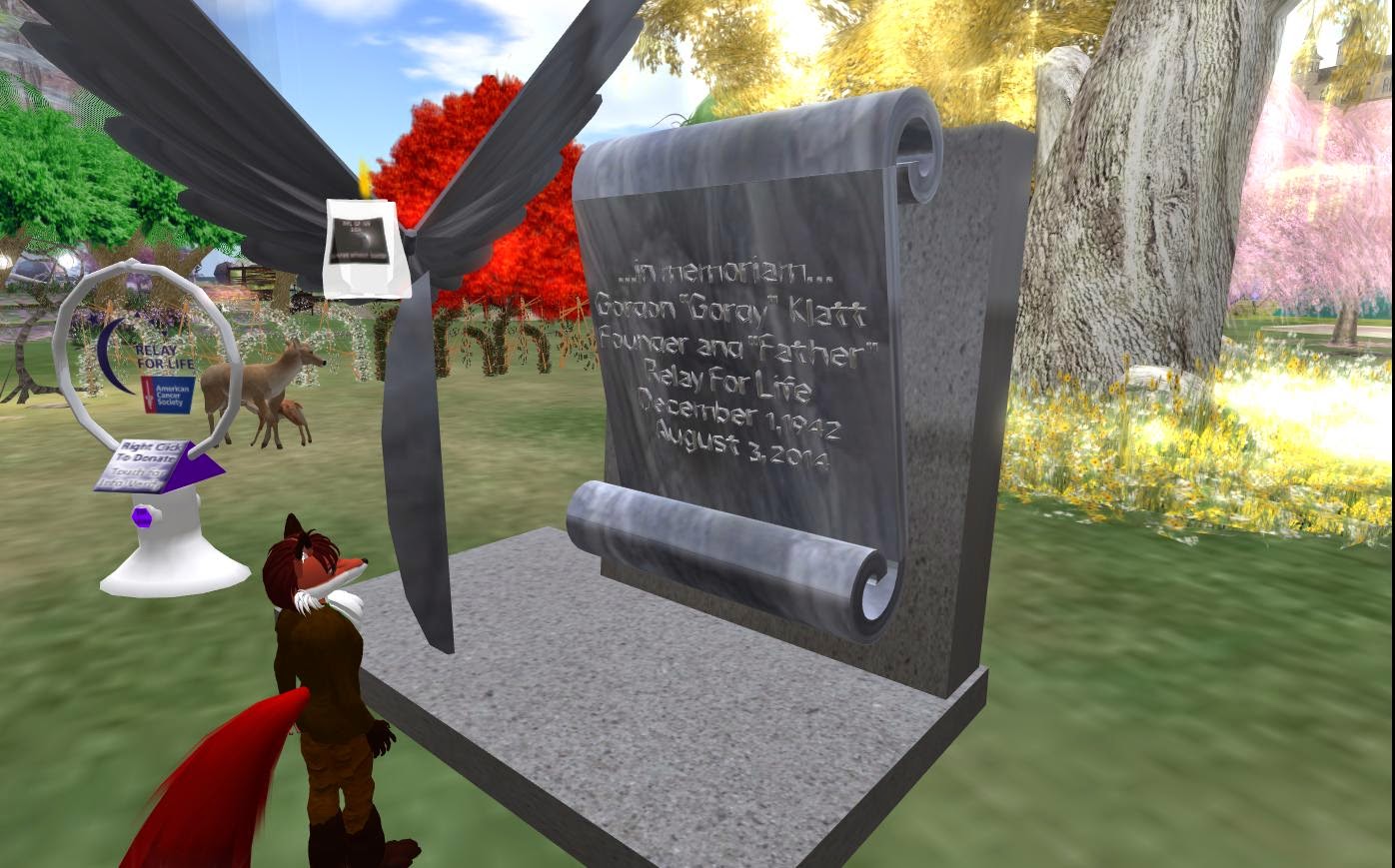 Getting back down to the ground, Bain then took me to the Dr. Klatt Memorial. Dr Klatt was the man credited with starting the Relay for Life, "When we heard the news of his passing we decided to do something special. It was unveiled at the start of the Luminaria ceremony. ...  And thanks again to Ferrator Montoya and Cassie Eldemar and few others they made that from a rough concept Panza and I came up with. Te Memorial Gardens will also be renamed the Dr Klatt's Memorial Gardens." 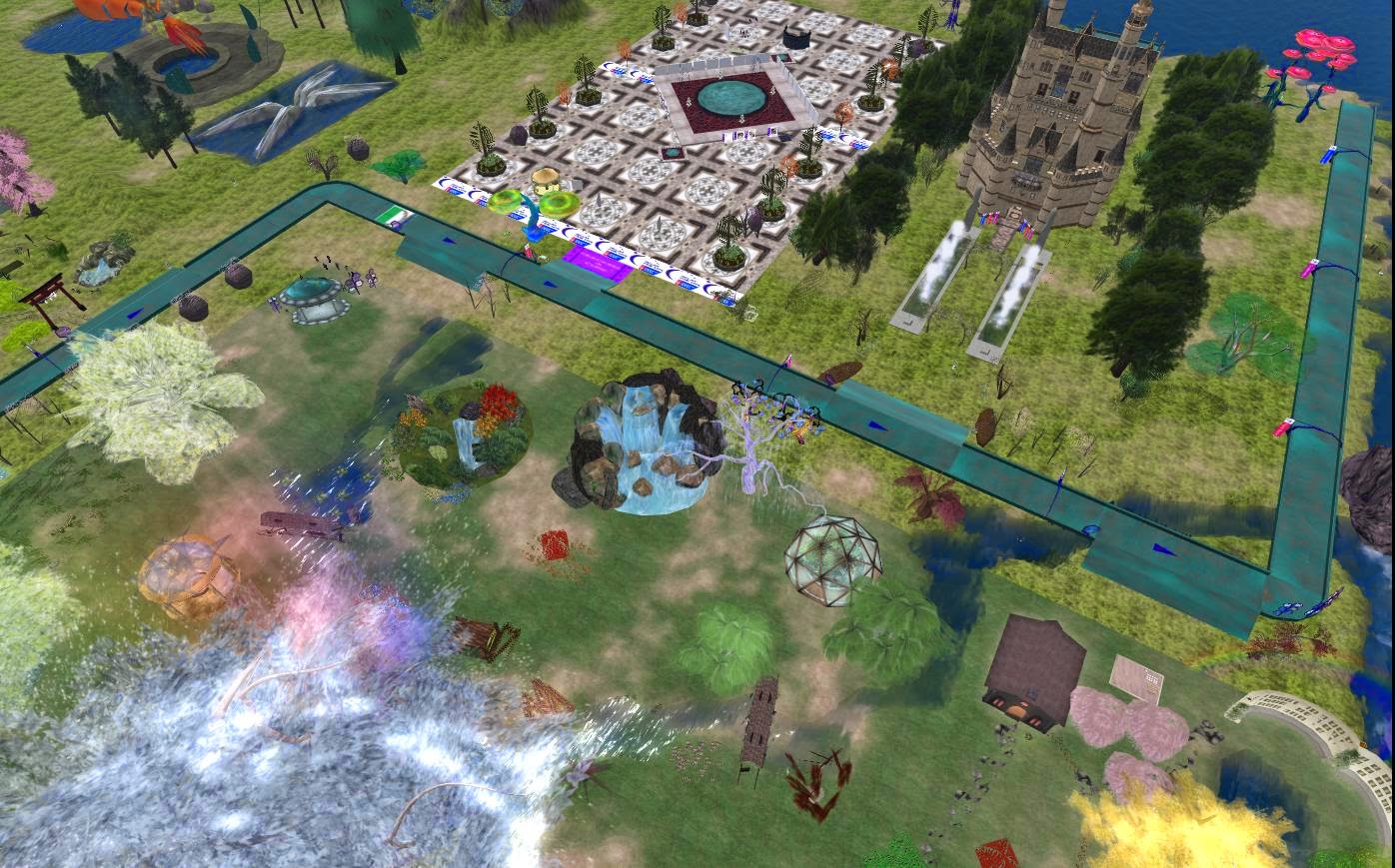 "The other big story is Lady Cha," Bain went on, "At the end of last years Relay she found Relay and created this sim in something silly like two days. We came over and our jaws dropped. (Her) goal is to turn this sim into SL ACS Island for survivors and caregivers." 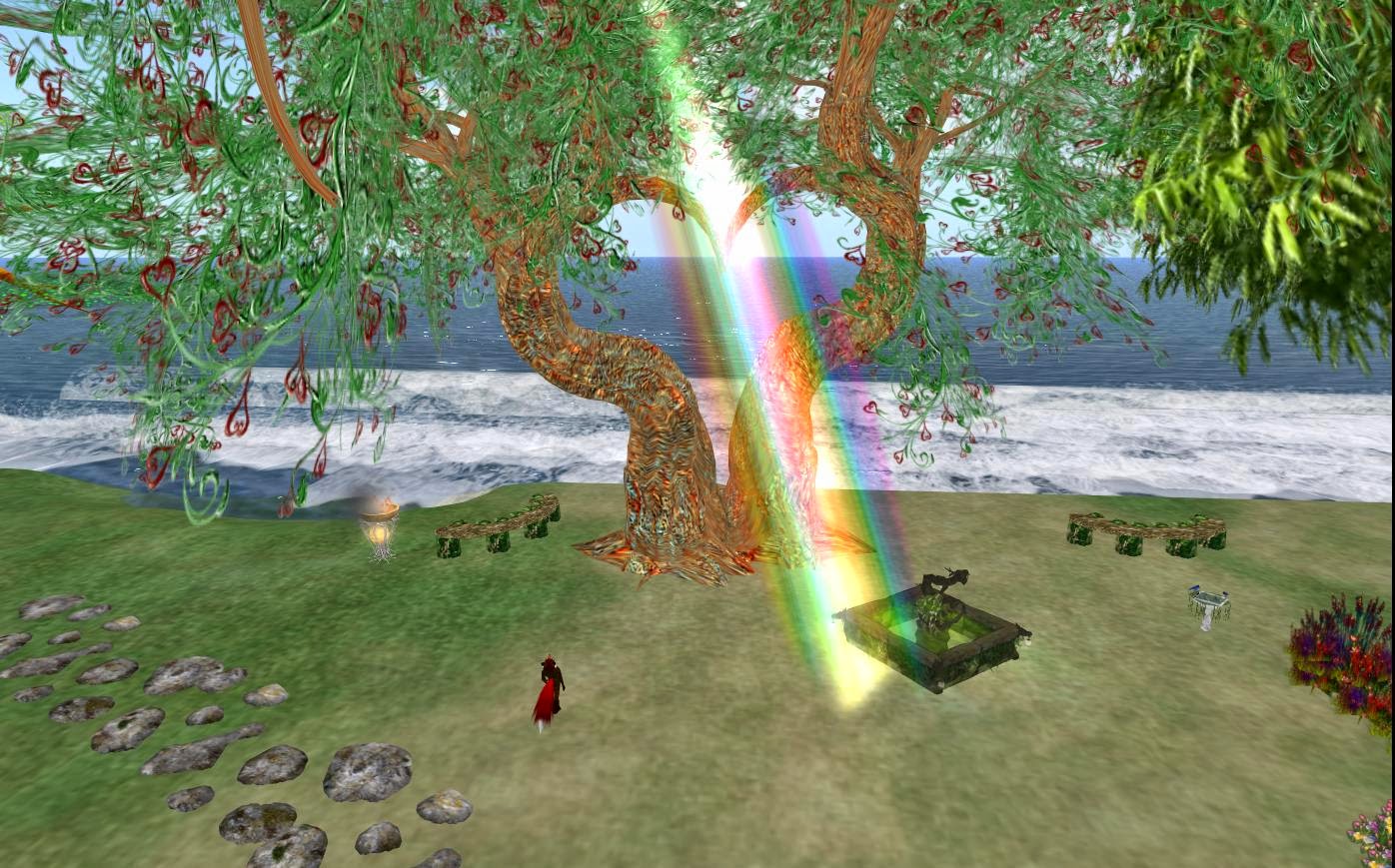 Bain did have some bad news, "but sadly, she been fighting her third turn by cancer's icy finger. We are all praying hard for her and she's on heck of a fighter. I don't think she knows how to give up. I hope some day soon, you can interview her. She's a lovely soul." 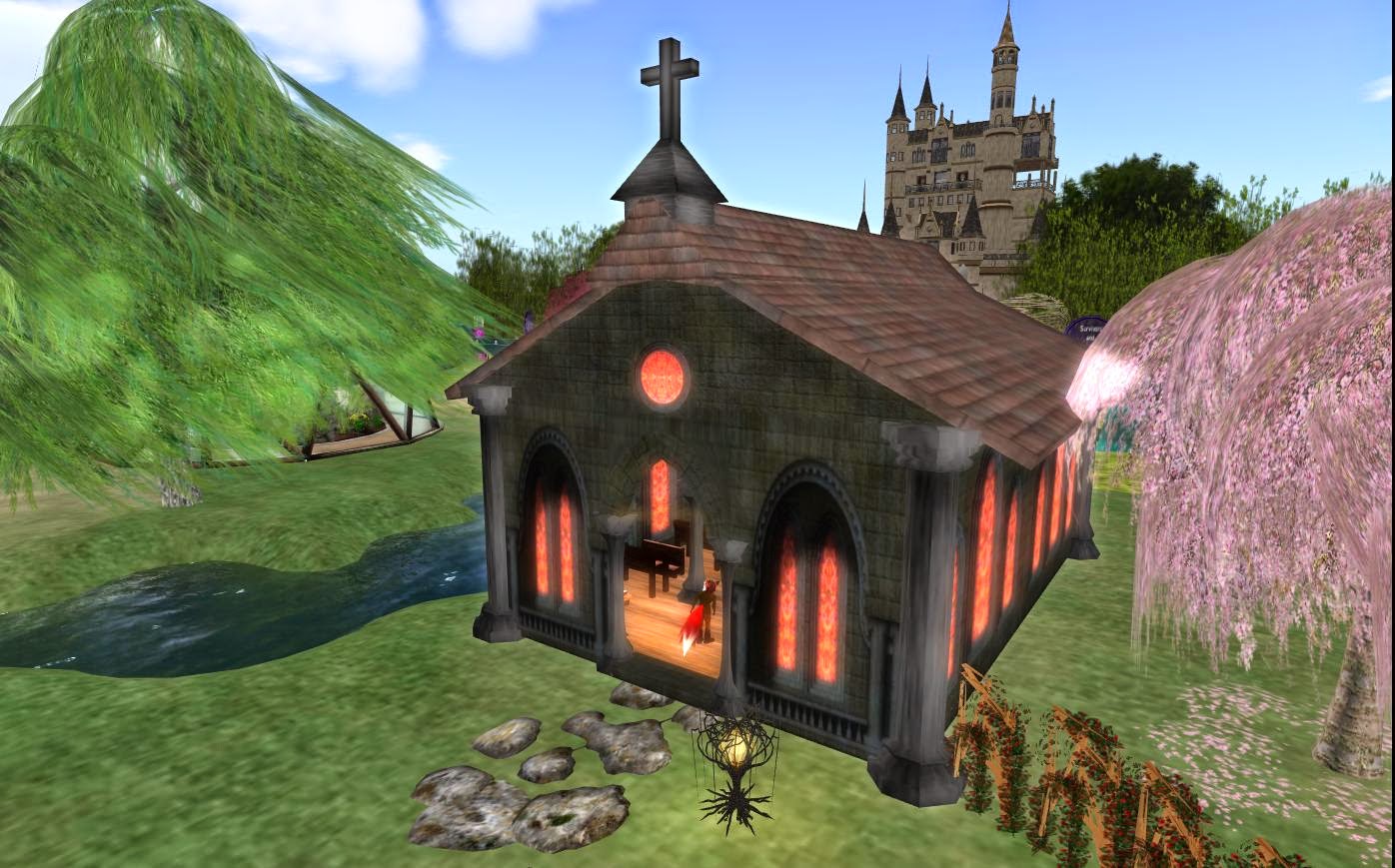 As it turned out, there was some debate about how long to make the Walk event, "I didn't know until IWz there 3 different plans, the normal 24 hours one, a 12 and an 18 hour one." They had decided on twelve hours due to the size of the track, "Sting had suggest only a 6 hour one, but we decided other wise from the get go." 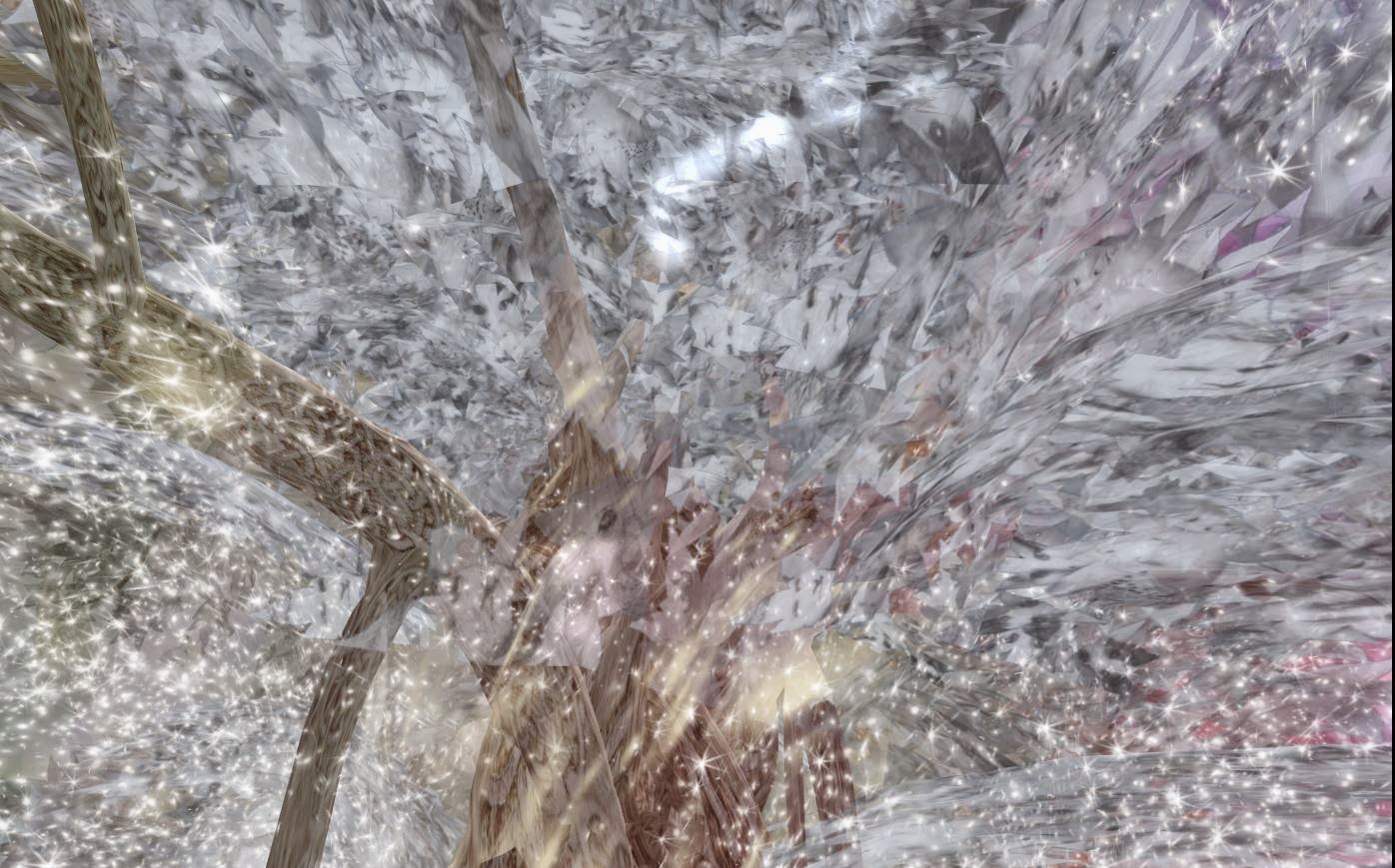 Bain soon had to go, but I continued looking around for a bit. Looking at the leaves of one tree, I found that they were actually the images of human faces. 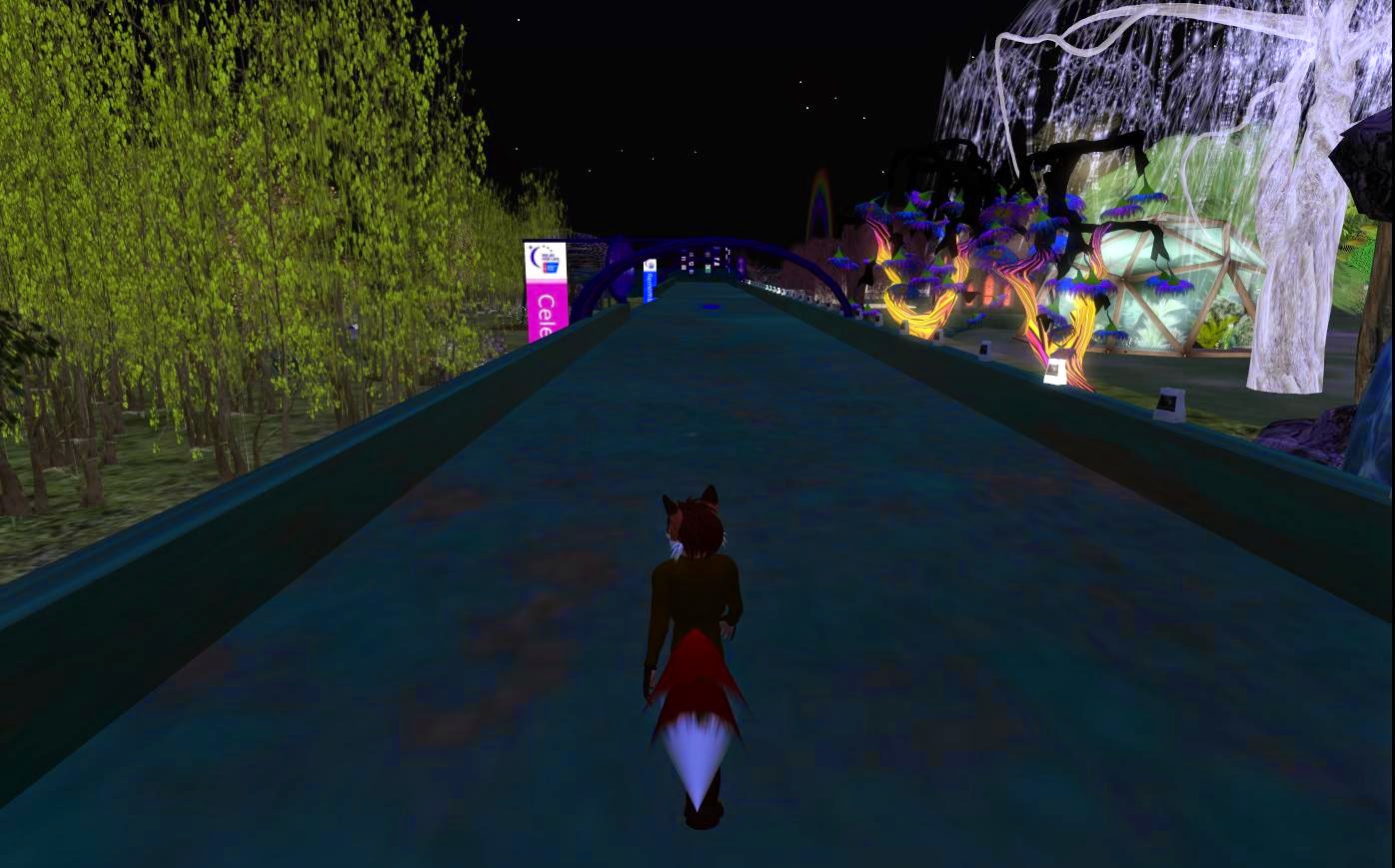 Night soon fell, my viewer remaining in region default mode, as I walked around the track. 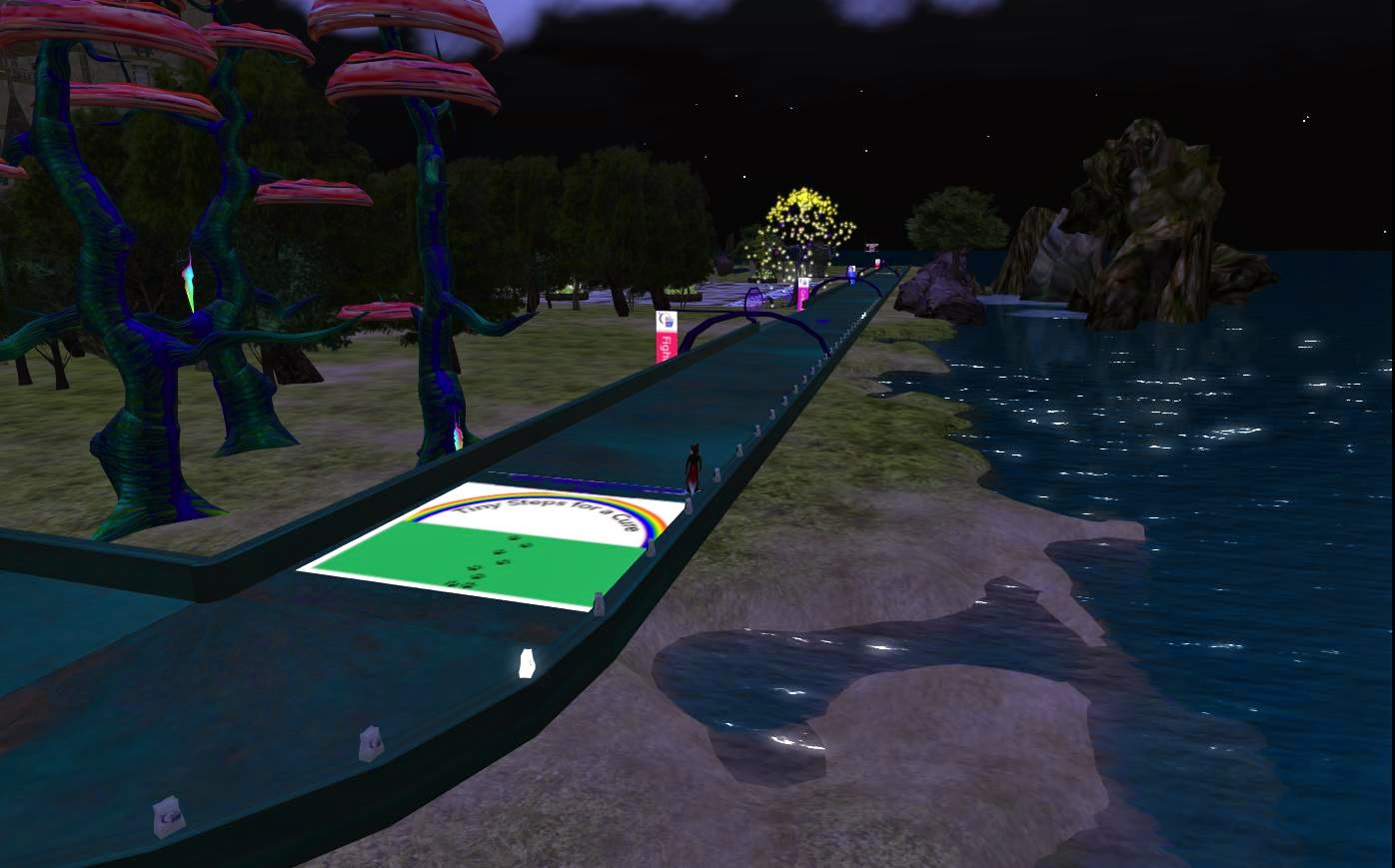 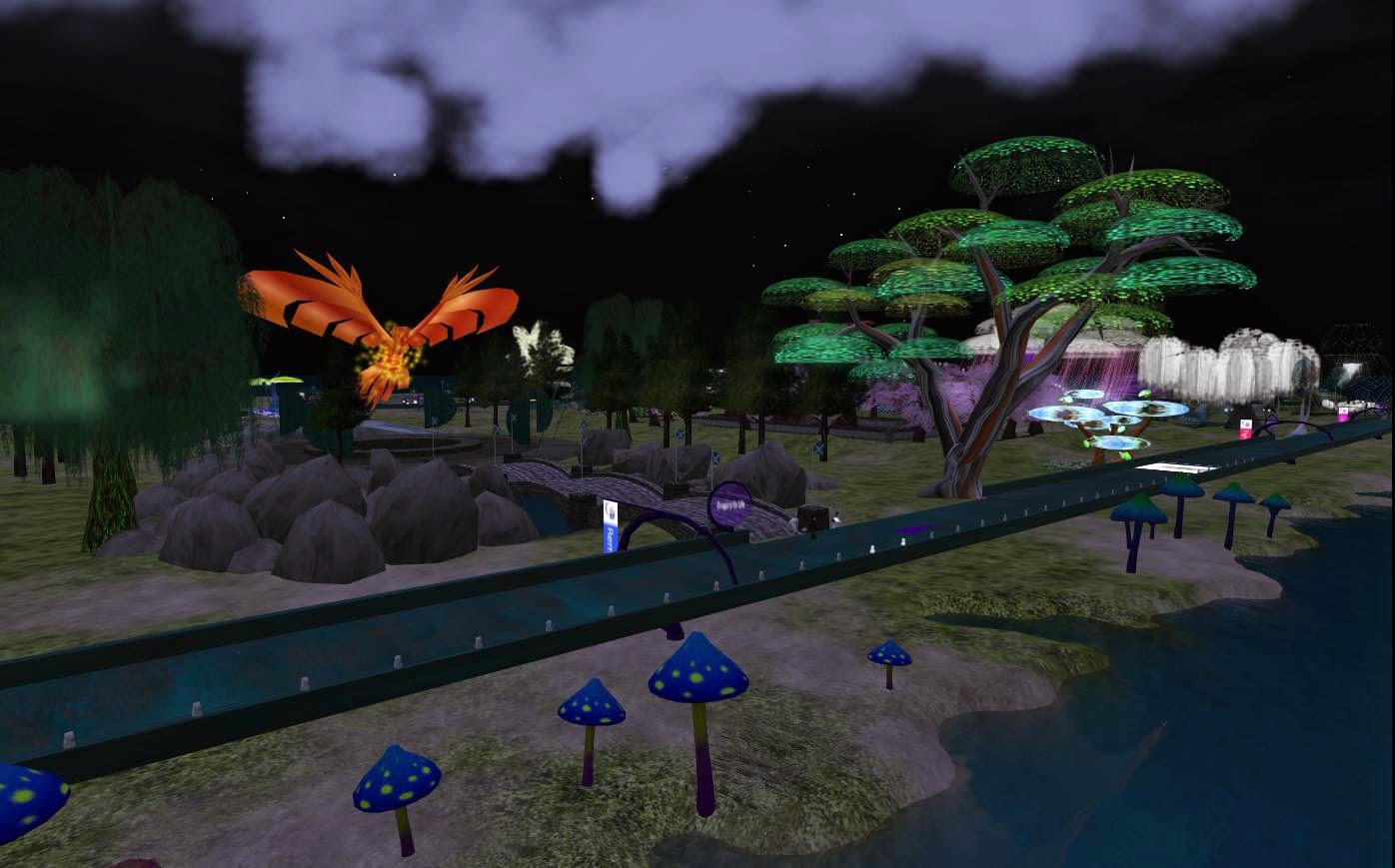 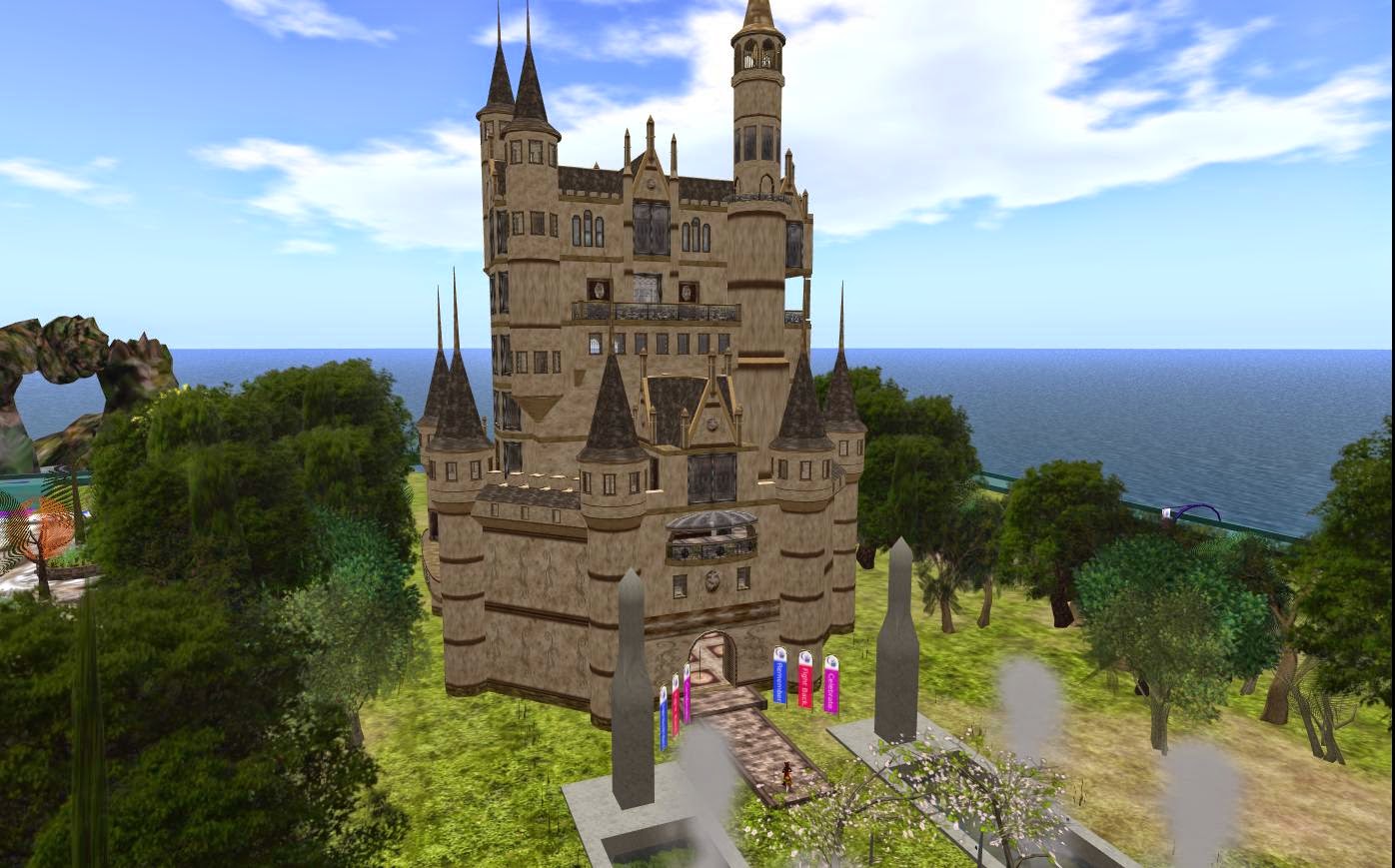 The largest build was a castle, standing about seventy meters off the ground, or about ninety above sea level. 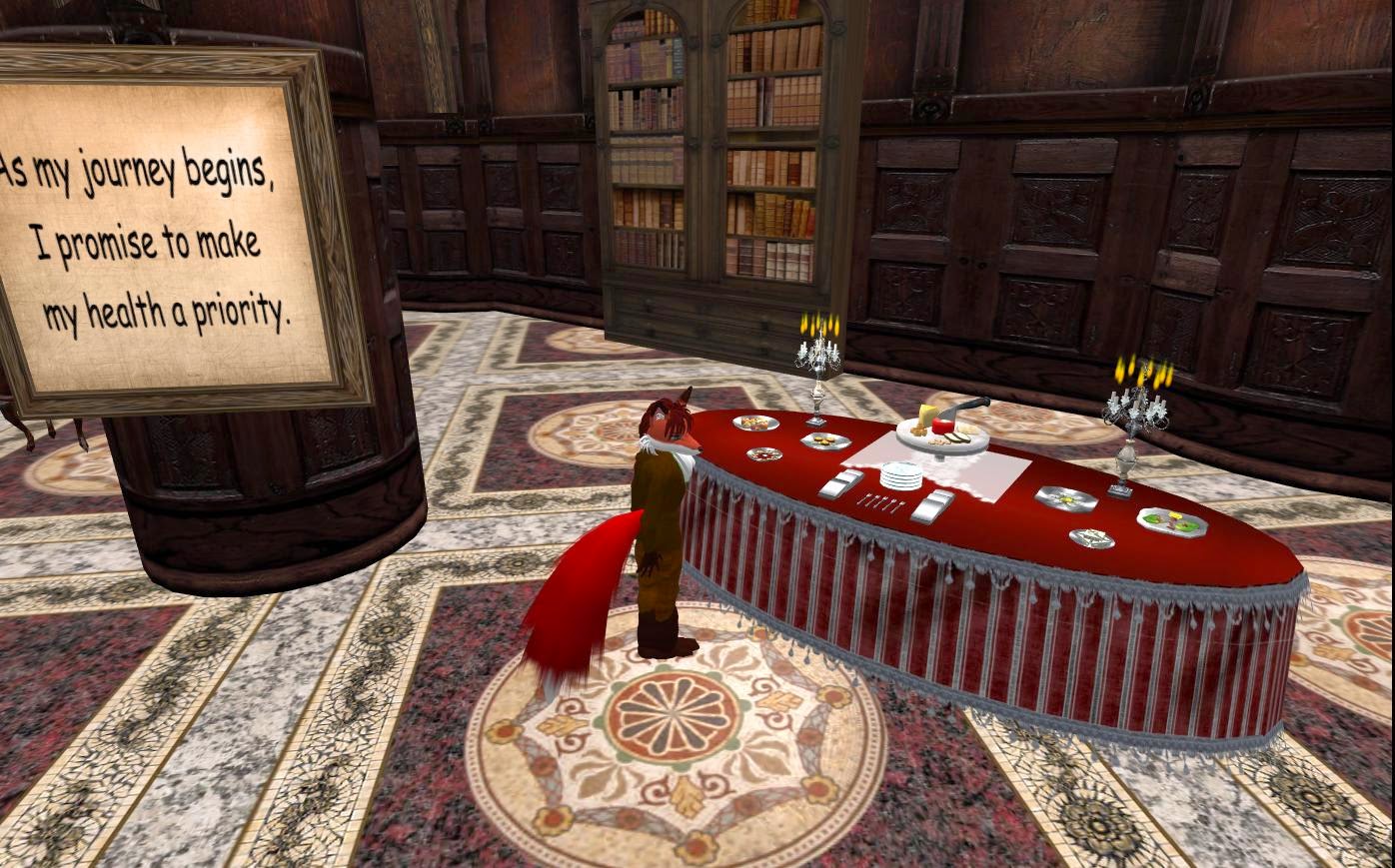 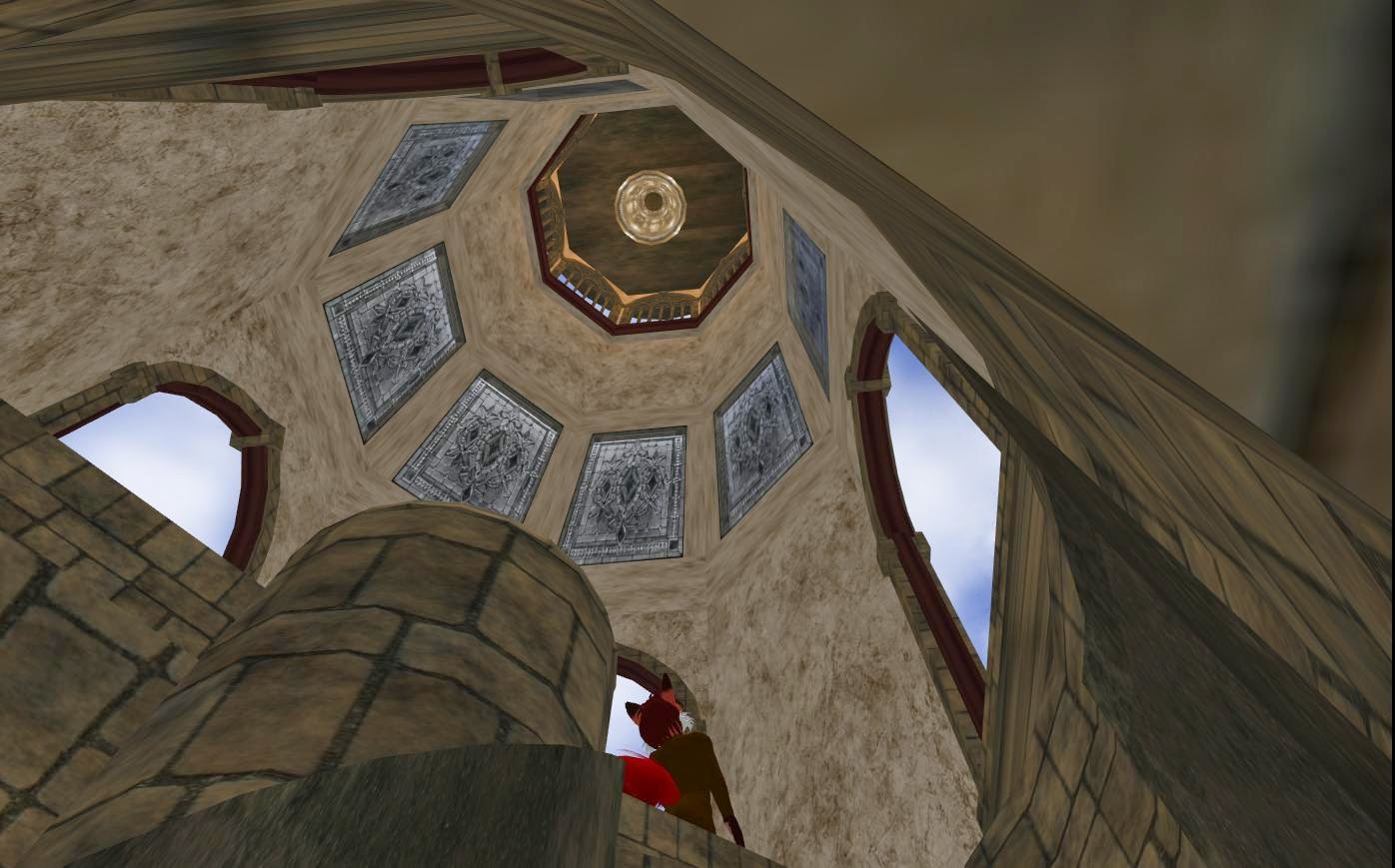 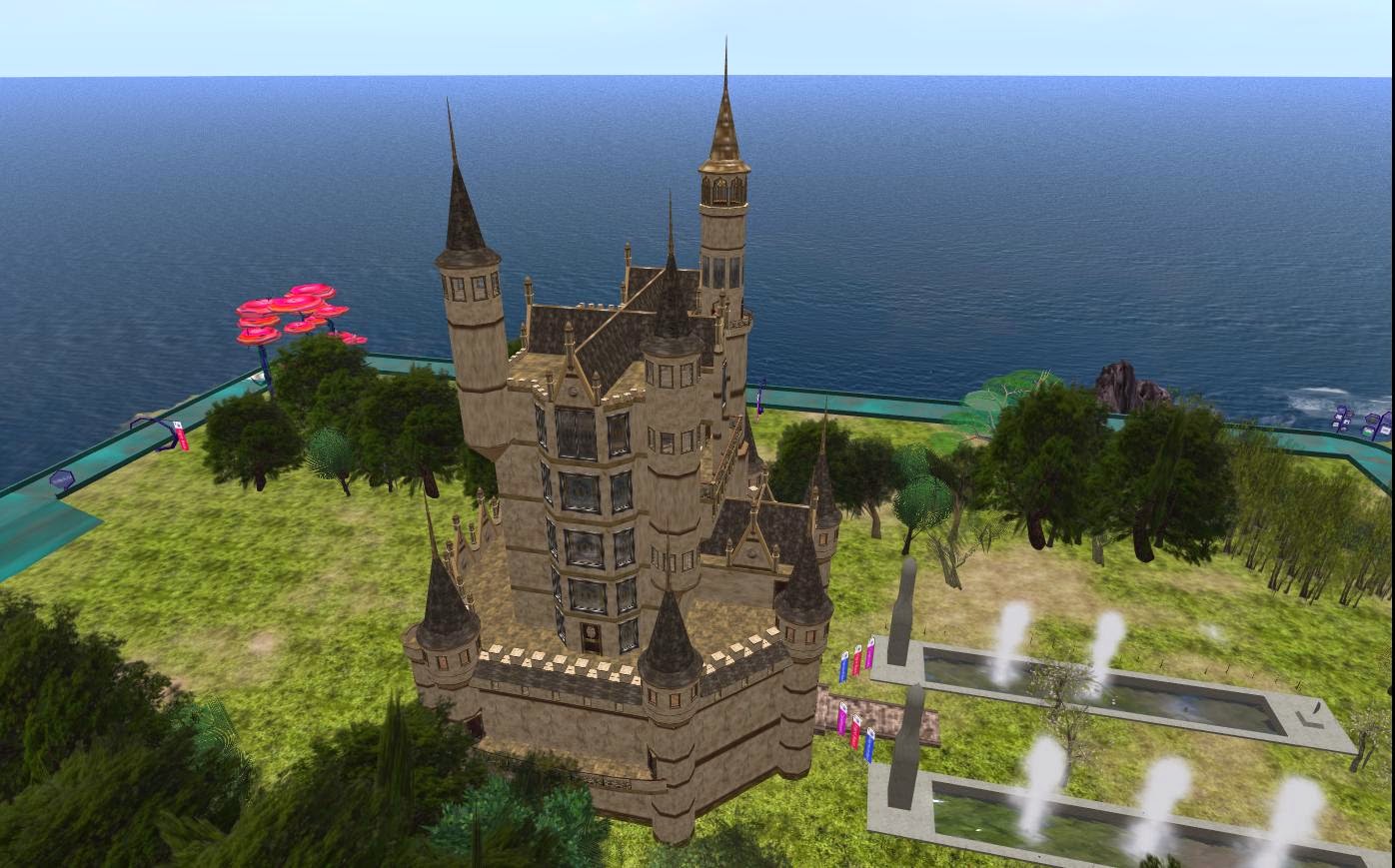 After The Walk came to a close came some news. The total number of InWorldz dollars or "Izzies" came to a total of 2 million raised. This is more than twice the amount raised by this time last season.

While the event was smaller than Second Life's Relay Walk, it demonstrated the enthusiasm of it's participants, and showed despite that the Linden Lab Terms of Service controversy that boosted it's numbers in the past is over, InWorldz continues grow and demonstrate great builds, and events, can be done there as well.

Wildstar Beaumont took a number of pictures, which he posted on his Flickr: