It's been a long long time since I've written for the Newser (only reason I don't come back to Second Life is because "Why? I did what I wanted to do there" and I'm out of touch now anyway). I've been wanting to write this one for a long time for Bixyl, so here it is. 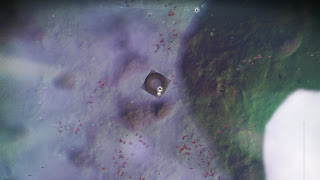 No Man's Sky has had its share of ups, downs, and zero-g moves that make the Titanic crashing about in a storm look like a mother rocking her baby to sleep. Pushed out far earlier than it should have, it met with fury from the fans, almost dropping to less than a 18% positive rating on Steam for quite some time. As I understand it, the investors knew it couldn't be done in time, pushed the company, took the money and ran (probably to another planet).

The game was marketed as being all procedural. With over 18,000,000,000,000,000,000 planets, it marketed as everything being new and original. The problem is, is that it's a computer game. Computer games need assets. As I wrote in a steam review, "There's not enough assets on this planet (heh) to completely make it seem like the universe truly has random plants and animals on every planet."

On top of that (also copied word for word from my review), they took a concept and applied a synonym to it... while you might find an Abandoned Planet somewhere, you'll find the mostly the "same kind" of planet if you find one that is marked Airless, Dead, Desolate, Empty, Forsaken, Life-Incompatible, Lifeless, Low Atmosphere, or Terraforming Catastrophe -- one planet type, many descriptors to simulate depth even though it's the same bloody thing. Come on, devs, you can do better than that. Problem is it requires work time and money which most people don't have. 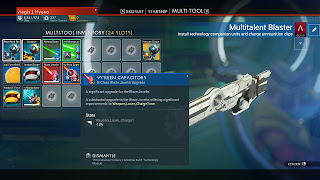 You start on a hostile world, having to find materials to power your Exosuit (Sodium, to be exact, as well as oxygen, dihydrogen, and carbon). You have a mining laser strapped to one arm, which can be upgraded over time if you find better models. You then proceed to find a crashed spaceship, repair it and take to the stars, exploring planets and warping from place to place, learning to manage inventory (the starter ship has very little room, as does your Exosuit and you need creative managing talents) while you piece together what's going on.

You start alone, and while there is a multiplayer function, I think it's more fun as singleplayer. Sometimes other players CAN warp into your system, and by default voice is activated, so you can communicate with the visitor for trade or PVP or whatever. I've only seen one visitor (because the universe is vast -- it's *that* rare that it happens) in my time playing and might soon jump into multiplayer and trade with whomever I randomly join. 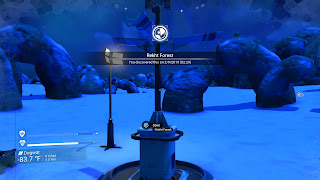 The main storyline is something that revolves around something called Atlas, and the goal of the game seems to be to get to the center of the galaxy where you might be able to warp to a new one. As I selected "free explore" instead of going about on the main paths, I don't know a lot about it and have spent all 130 hours of my current game in my starting system, trading and shooting pirates.

There are three races in the universe: The Korvax (computer hivemind), the Gek (lizard-people) and the Vy'keen (reskinned Klingons). I haven't followed the lore enough to learn more about them.

As with any game of this large a scope, there are an unfortunate amount of bugs. There are more bugs in this game than there are lies coming out of most politicians these days. One bug is a "crate" bug, where you can't remove stuff (I find shutting down the game and coming back 15 minutes later wakes it up). This bug is almost 3 years old, so either the devs won't fix it, can't, or don't know how without breaking the game. Another bug is that locations you loot can only be looted once. If the game later assigns the location as a quest, the terminal is already looted and the quest can't complete. A third bug has quest "return locations" go to empty spots where there is no questgiver present to give the reward, so the quest has to be abandoned.

The opening questlines are very linear. You can't "hire randomly" -- you need to go to specific spots for specific races to join your base, wherever you decide to build it. If the quest requires you to make antimatter, and you find some elsewhere first to use it to warp to another system before you follow the steps / get the recipe for it in order to make it, it'll bug out and possibly lead to problems later.

Finally, and this thing bugs me, is that you can only have nine crates. These crates are twice your size, but only have five slots (a starting exosuit has about 25). If later you get a freighter, the crates you put there mimic the ones you have on the ground, sharing their inventories. What genius was responsible for that idea? This is the 9999th century up in space here. There should be planets that sell warehouse space! 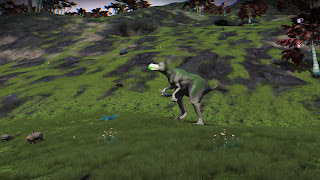 The game is *very* pretty to look at if you're a casual kind of gamer, but like I wrote above, you'll run into repeats (especially locations) very early and very often. The grind especially in the early game will wear you down from a six foot long spear point to six inches of blunt shaft of wood, so be prepared to put in long hours. I like playing hardcore (one life, deleted save if you die) but after a few deaths on this game? Not here. The grind overpowers that of Minecraft's grind for iron and diamonds by a factor of about sixteen.

Overall, the devs got pushed too hard too fast, paid for it, TRIED to rebound (18% positive to 80% positive as of two or so weeks ago, it's back down to about 50% now) and are at least TRYING to come through on their promises. It's still not worth the $60 asking price, so I say get it if it's on sale as an impulse buy. It gets three dragon hoards out of five from me, because at least they're trying and will continue to try.

Editor's note: When I wrote about the problems of "No Man's Sky" in Sept 2016, it looked like the game's days were numbered. It seems it's been sticking around due to enough people continuing to buy, the developers determined to redeem themselves, or something of both.
Posted by Bixyl Shuftan at 6:00 AM No comments: 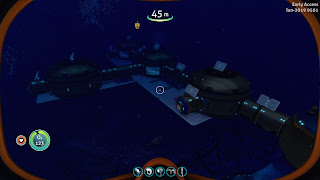 After becoming seriously hooked on the original game of Subnautica, Unknown Worlds, is in process of developing a follow up called, Subnautica Below Zero.  The game is now out in 'early access', which means you can play it, but it is incomplete, buggy, and some stuff doesn't work. But that just means they want you to give it a whirl and provide them feedback to fix the issues and ideas for the storyline.

The game takes place on the same planet, 4546B, but in the frozen north and at a time after the crash of the Aurora.  While they have kept much of the flavor of the original game, there are some different twists and turns to the new game.  Some of the recipes to build items have changed.  Some of the old nasties are still there and they have added some new critters to study, or eat, if you play in Survival or Hardcore mode.

There are also new a different area to explore with many new and different flora to see.  Unfortunately, this being early access, almost none of it can be scanned. The types of resources available to you has changed some too, during this early access.  I can only hope they will fix some of this, during one of the regular updates, or in full release.

As to vehicles, so far, all we get are the Seaglide and if you find the Dropbox, a Hoverpad Databox, which will allow you to build the Snow Fox, hover bike.  The one drawback for the Snow Fox, it only works on land, it doesn't work on water.  So you have to be careful where you construct the hover pad.

I hear that the Cyclops and Seamoth will not be in the new game.  The PRAWN SUIT will be however.  As for a replacement submarine, I hear they are kicking around the idea of a Sea Truck.  A modular type sub,  The Cab, with different modules you can attach to it, like a train, at reduced speed and performance, but with upgrades can fix some of that.

Some of the tools and base pieces that you use to build in the original game, you don't in this version.  They are Dropboxed to you, or they are not included yet. One piece that is missing, that is driving all of the players out of our freaking minds.  NO BATTERY CHARGER!  You burn thru so many batteries in Subnautica Below Zero, it isn't funny and without a charger, you have to keep making new ones, which gets to be a PITA! It looks like there will be some new base pieces for us to construct, but of this release, they are not available yet and will probably require Titanium Ingots, which we can't make yet..

I finally got to see how a Grav Trap works, so for those players in Hardcore, Survival mode, it makes collecting dinner or water, much easier..  Who knew?  (laughing out loud!) Just hope they fix the game about certain items, before you eat, drink or harvest yourself out of existence.

I understand they will do major updates about every 6-8 weeks, maybe minor updates more often.  Full finished version isn't due for at least a year and everything we do now is probably subject to change, so no fear of the game getting old, or stale.  So for the two hours of fairly completed game, I think it's worth the $20, I put down, knowing it has just scratched the surface and you can still explore beyond what they have semi-officially completed.  Have fun getting your feet wet and seeing new and interesting areas and critters.

Rita Mariner
Posted by Bixyl Shuftan at 6:00 AM No comments: