Some residents in Second Life have always wondered what else is out there among virtual worlds. And this year following certain events, such as the Terms of Service controversy, more are looking more than ever. InWorldz has emerged as the leader of the alternatives to Linden Lab. But making the move to another grid can be quite an intimidating experience. People often say it's "like being a noob all over again," not knowing who to contact or where to go. 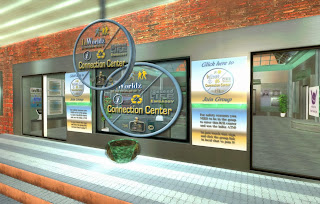 Fortunately, there is a place and group that can help out residents moving back and forth from Second Life and InWorldz: The InWorldz / Second Life Connection Center.

The Connection Center is run by Zia Larnia and Amore Crux (amore.xofan). Contacting them, they were more than happy to talk about the place and group, and we soon met up to talk.

"This is the Second Life / InWorldz Connection center on the SL side," Zia explained, "We are a privately owned nonprofit in collaboration with InBiz Marketplace of Inworldz. ... We specifically assist SL residents in expanding to (InWorldz)." Zia commented InWorldz was much like Second Life five years ago in that it was "a builder/ creator world." Inside the building, there was some information on the wall, including, "both worlds Terms of Service. ...The notecards for linking avatars from here and there are on the wall by the ATM terminal." 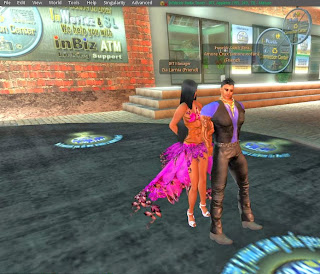 Zia commented that a number of people had already left Second Life for InWorldz for various reasons. Among them, the lack of technical support unless you put down quite a bit of cash to upgrade your status, "It is cheaper to play World of Warcraft then it is to (have a Premium account in) SL and if you are a 'free' account there is no support. There is no acknowledgement of people who have paid HUGE amounts, even as a free resident. I was a 'ghost girl' for months and LL said, Sorry no supportive service for a free account 'not a premium account we can't help you'." So I then told them 'okay then so sorry, my 400 a month on sims is gone out of your pocket then (grin)."

"They are making tons off the free accounts and then say 'pay the 72 a year on top of that for a premium account and then we will acknowledge your contribution?' That is so backwards." 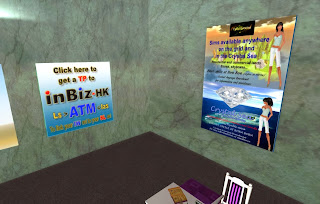 She compared Linden Lab's service to the gaming industry, "The truth is, the video game genre is there to make money and make a profit, on all levels. League of Legends, it is free and free to play, but they do offer special Pay for graphics that people buy. WoW is 15 dollars a month, but you can't beat Blizzard service. I had my account hacked and they were all over it and had me back playing with all my items back in 3 days, and gave me credit for that time."

"And InWorldz is making money too. So far they do not find it necessary to cheat it's players (grin). It opened with many freebies. Avination went the opposite, no freebies. ......I am sure there is a break down of the cost to run a virtual world and then also the profits somewhere even for a place like InWorldz (grin). Second Life is probably high up there and dropping fast right now."

Other issues brought up by InWorldz residents whom have come over from Second Life include "Project Sunshine" which made their virtual experience a gray one as their computers could no longer properly render other avatars, and of course the rights of content creators which were put into question by Linden Lab's Terms of Service controversy. 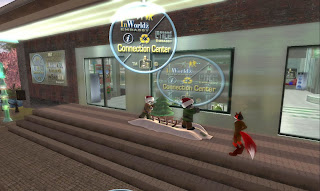 It wasn't long before more residents dropped by the center, and Zira went to take care of their questions. Chatting with Amore, he felt more Second Life residents would be willing to at least visit InWorldz, but one problem was many weren't aware of other virtual worlds besides Second Life, "(part of it) is all a matter of getting the word out since it's still hell of a lot of people in here that's not even knowing InWorldz exists I believe." Another problem was misconceptions and mistruths going around, such as one made by an avatar company, "I think its a good thing if people know what our center does and the fact is I know there has been a lot of false rumors going around. ... As far as I know InWorldz is a much safer place for creators then Second Life has ever been. In InWorldz they cut you off and kick you out directly if (you are) stealing others stuff. ... Also ... something that's created someplace else is well protected even if it gets in here." 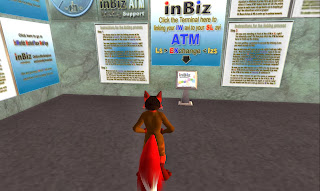 On the question of transferring items from Second Life to InWorldz, Zia explained, "Anything that you are owner and creator of is exportable to your hardrive in the form of an .xml file. Then it is uploadable into the Grid." As for land, it was much cheaper than Second Life, a private sim with a 35,000 prim limit costing 75 US dollars a month.

The Center is among the groups behind a discussion on the InWordz Grid to be held on November 30.

Relay for Life Holds Final Event of Season in InWorldz

On Saturday November 9, The Relay for Life held it's Relay Weekend event for it's Inworldz fundraising season. Besides Second LIfe, the Relay for LIfe has been holding events on this smaller virtual reality grid as well. And this was the final and largest event for the year there. This was the second Relay for Life in InWorldz season. 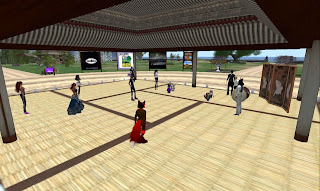 The event took place on three sims, with the track on two: RFL Jazz Paws and RFL In Biz. At 9AM, Red Ryder spoke over on the radio at a gathering on the third sim, which numbered a little less than two dozen. While much smaller than the Second Life Relay, the enthusiasm was still there. Following Red's words of encouragement, the crowd went to the track, grabbed a pedometer, and began making laps. Unlike the Second Life Relay, there was no "Walk and Talk" wearable, so people stopped to chat on a number of occasions. One Relayer commented she was doing the walks around the virtual track on her real life treadmill as well, InWorldz hooked up to it via an app known as InShape. 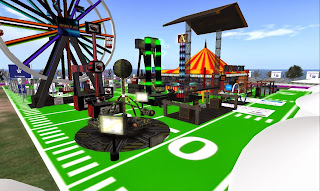 Besides the human avatars, there were a number of Tiny avatars at the event. They were a higher percentage of participants than at the Second Life Relay. Between this and the sim sponsored by Jazz Paws, the Tinies had something of a big presence on the InWorldz Relay.

"Oh I absolutely love the RFL events," Ladyheart Muirin told me "I always used to do them in SL and I think it's wonderful that people work so hard together for such an amazing cause. It's just wonderful that it's now in IWZ and everyone is having lots of fun too (smile)." Ladyheart explained she hadn't been to Second Life on anything more than occasional brief visits "in a very long time." "We don't play in the old world much," Tadhg Muirin informed of his friend and himself, "our lives are here." 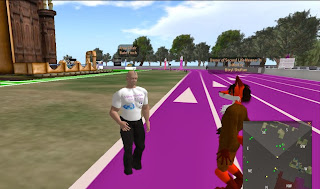 I ran into Bain Finch there, who earlier this year worked with Second Life's Relay. He explained there were some technical challenges in getting things up and running here, "the bigest tech problem was getting the team tracking database up and running and rewritting the kiosk and vendor script to work with it. … but we had lots on people step up to the plate to help out develop the tech. And yes, a lot of work to do during the off season to fix all the short coming everyone help hash out …You know, I've always had a great appreciation for the work Dwen (Dooley) done for RFL of SL. Now, even more so. … and I am so overwhelmed by the offers of support we received from everyone in InWorldz." Bain credited Wolf Hartnell with making the RFL in InWorldz pedometer. 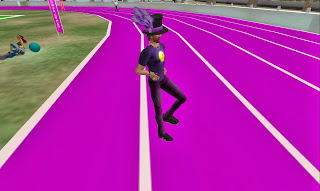 I asked Bain if he felt the InWorldz Relay was getting more attention due to the Terms of Service controversy in Second Life. Bain's response was, "I'm not sure on that Bixyl. I do know there been a steady increase of people coming to IWz, whether that due to to the SL TOS or just the normal progression of growth, I couldn't say. He explained another reason more people could be coming here as the Grid was becoming more stable, "As more parts of the IWz tech comes online like the physic engine, now mesh and other advance stuff, the content creators are having a field day with their wares." 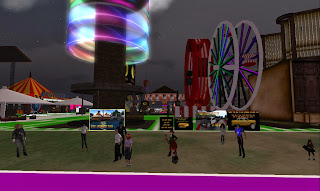 Bain had the goal of involving established InWorldz residents from the start, "from the start of my involvement, I knew we had to make this IWz Relay for and by Iwz'rs. And because of the attitudes on the residents here had to adapt how RFL conducts itself. … A good number of the folks here left SL for various reason and they settle here because this grid is different. They left due to the various political issues of the LL and here and founders are so much more hands on." Being smaller than the Second Life Relay, there was one other difference, "One of the things we do, is almost all our planning meetings are open to everyone to attend and contribute. As we grow we will not be able to keep on doing that, but while we are small we will."

As the event went on, the Relayers not only went around the track and chatted with one another, but also had some fun on the various "camps" inside it, such as the bumper car ride. There were also music events in which a DJ would play at a place, and s number of Relayers would dance. The event, and InWorldz Relay season, would end at 9PM IW (and SL) time.

Bain Finch later told the Newser $796,000 InWorldz dollars, or "Izzies," had been raised, or about $800 US, for the InWorldz Relay season. A small amount compared to that raised in Second Life. But still a welcome contribution in the struggle against cancer.