"The Great Wacky Race" on Rust

It's been about eight years since my friends and I first heard about the Survival MMO "Rust." It's gone a long ways since its early days in 2014 of dodging zombies and zombie animals on a circular road. The game was overhauled in 2015 to more or less it's current form, though has gotten numerous updates over time to tweak and add things such as hostile NPCs, new areas such as the scientist and bandit compounds, boats and diver gear, and more. But some things remain the same, such as the infamous chopper. And while the adage "never trust anyone on Rust" may be slightly exaggerated, it's still a good one to hold onto in the more vicious Player versus Player servers which aggressive players find it their mission to crack into any base they can, and wary players set up eleborate defenses that clobber anyone, hostile or frendly, within range. But not everyone wanting to play Rust wants to raid or deal with raiders. So there are numerous Player versus Environment servers for the more peaceful gamers.

Over the years, Nydia and her friends have had their share of adventures in Rust, notably on Nydia's Angel server when it's active. Recently when Nydia asked her group of Second Life friends on her Discord server what game they wanted to play together on, the majority chose Rust. Unfortunately, my computer has a hard time with the Rust, taking over an hour to access a server when it took just twenty minutes to download the game. So after a couple last visits to finish my last review, that meant I had to do little more than wish them well and know what was going on through Discord chatter and the occasional streamed session by a player, such as Brandi Streusel.

As I mentioned, the game has been continued to be tweaked and have things added. In the most recent update, driveable cars became an option. Vehicle cabs began appearing across the island, and players could either turn them to scrap or rebuild them. One could make a basic car to get around, or a truck to haul stuff. From the chatter and the streams I saw, my friends were having fun with them.

Then I heard some chatter about a race. And before long, it happened. I only heard scattered details, then Jasmine told me in her own words what happened at "The Wacky Races" as the race came to be called. Presumably it got it's name from the Hana-Barbera cartoon that first aired in the late 60s in which a number of zany characters competed in various cross-country races, with most giving an honest but competitive effort and Dick Dastardly always trying to cheat his way to victory (fun fact: Dick Dastardly almost won a couple races honestly, but blew it when he couldn't resist stopping to pose for a camera.or giving someone his autograph). 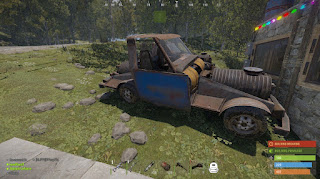 "Those little cars there are a blast to drive," Jasmine would tell me, "And if you can ramp them they get serious air time, to the point I worry if the server will ban me for fly hacking." Of the race, "Yeah the race literally started out as a silly idea I passed on to Skylark, a challenge to her to build a three engine, three-mod car, and had already figured it out and was curious to see if she could. At first she said it wasnt possible till I told her. And then the first and second of the rave cars was built. I was at my place, commandeered Umbras three-mod water tanker, and refit it to become the third racer. Then me and Umbra worked on his four-mod to make it the first four-mod racer.  The thing actually looked like a rolling cock, I at least thought it was funny

"Then I did a shout out to Nydia to get on the server cause I was up to shenanigans. She had NO clue what I had in mind. I used a three-mod that had been sitting out beside the road since the server was last wiped, made that one into yet another 3mod racer. (I then) grabbed some wood, scanned the map for a good start point and chose the Entrance to Bandit Camp. I let.everyone, know and that we would be racing along the rail line. If your wondering why we raced along the rail line is because the ground was reasonably flat and it eliminated all the curves that plagued the map."

"By the time everyone had arrived, I had made a proper starting point building. We had wait for the Patrol helicopter to leave. 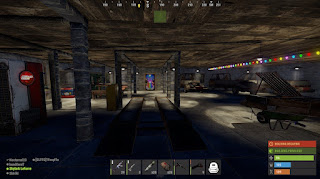 "Nydia finally got logged in and was instructed to go by my vehicle bay and grab the car sitting there, and to hustle her *ss up. Her exact words if I recall was, "HOLY S**T!" Once she arrived, I explained the rules. Nobody was friendly during the race. It was a single lap around the map. First one back (would win) my hat, I liked that Snowman head hat, plus 1000 scrap.

"We lined up, and off ripping it up racing along the rails. I honestly think I hit every tree, and backed into the ones I missed. These cars moved soo fast the smallest bump or collision would send them barreling out of control. I somehow managed to get in the lead for the most of the map race, right up till a chicken, yes a chicken, walked out in front of me. I hit the bird and was flipped end over end, and landed in the trees and got stuck.

"Right as I got back on the rails, Nydia went flying passed me to take the lead and won the race. I came in second place. Umbra took third place. Nikki took 4th and Skylark came in last. Sky wasn't able.to control the car, leaving her to collide and tumble in the snow biome area. But we all stayed there cheering her on and finally sent Umbra looking for her. She was soo mad and I can understand why. Maybe by the time we have another Wacky Race she will mop the floor with us. 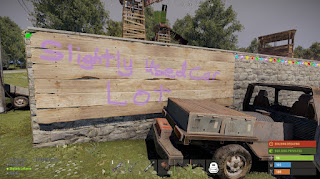 "There ya go Bix, your you a first hand account of the recent Wacky Race. Maybe next race I'll get Nydia to live stream it."

Snowy, who had a few pictures, was saying it wasn't too bad, "I was not all upset with the races. I thought the races were fun, but I was frustrated. I was getting no where fast."

It's going to be some time before I get back into Rust again. Recent events have not been kind to neither my wallet or amount of gaming time. But in the meantime, it's good to hear my friends are still having fun with it, and finding creative ways to do so.