Facebook/Meta's virtual world of "Horizon" has gotten it's share of criticism (and jokes) over time. But two recent developments have added to it. There was an inworld meeting not long ago in which Mark Zuckerberg met with several online creators. That the owner of Facebook goes online to meet the people there is certainly a positive development. But among the things he had to say was something at one point when they were discussing the ability of people to build things within Horizon using existing tools there, rather than building them outside the game and importing them. Just after the six minute mark in the video of the meeting, Zuckerburg makes this comment:

"...one of the things that we've just tried to do differently is the whole co-developing experience, the fact that everything that you're building is in Horizon itself. I think that is really just different from all of the other experiences out there."

Anyone even remotely familiar with Second Life knows this is not true at all. Since the begining, it's residents have had the ability to build items. Among the first things yours truly did was make a new shirt and jacket. So surely Zuckerburg would know this? Probably, though it's not outside the realm of possibility that he's been so disinterested in Second Life, he hasn't bothered to learn much more about it than it exists (If he's spoken anything about our virtual world, I haven't heard it).

Another possibility is that he is aware that Second Life, and other virtual worlds, do allow inworld building. So why would he just up and tell a mistruth? Maybe he sees that as part of a "spin" to promote his virtual world, pretending that there's no one else that can match him. Or maybe he doesn't want to acknowledge Second Life's existence and feels he doesn't have to.

So either he's unaware of basic details of other virtual worlds, perhaps unaware of them entirely, or he's not telling the truth. Neither one looks good. 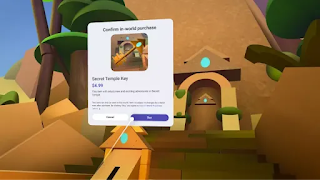 Facebook/Meta was criticized over another detail of Horizons: how much of a cut do the owners of the virtual world take from content creators? An article in Business Insider stated that they would charge content creators 47.5% in fees, almost half. "We think it's a pretty competitive rate in the market," Facebook/Meta's Vice President would say of it. But in the past, Zuckerberg had been critical of Apple charging 30% for developers to sell in it's App Store. Naturally, Apple was quick to point this out. A spokesman would say the "announcement lays bare Meta’s hypocrisy. It goes to show that while they seek to use Apple’s platform for free, they happily take from the creators and small businesses that use their own."

PC Gamer suggested a better comparison was Second Life in which fees to "move money into or out ... range from 3.5% to 7.5%" Executive Chairman Brad Oberwager would say, "I can't imagine that Meta's nearly 50% take will be that motivating to creators," pointing out that the Lab had paid 86 million USD to content creators last year. Philip Rosedale, the founder of Linden Lab, would tell PC Gamer, Facebook/Meta's fee "seems like a great way to dissuade creators from actually participating in its economy, but, frankly I would expect nothing less from them. They need to find some way to fill the coffers as their surveillance model loses steam."

Meta/Facebook seems rather untruthful and greedy, which will not help it's reputation, or that of it's virtual world Horizons, and will discourage people, regular users and content creators alike, from using it.