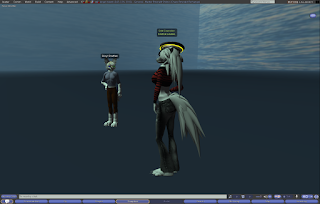 Besides Second Life, there's a number of much smaller virtual worlds. Inworldz and Avination are the best known, but there are others with just a few people and high hopes for future growth. Among the new ones is a grid named Prometheus. The name comes from the prequel to the "Aliens" movie.

Being sent an invitation, I was able to access the world through the OS version of Firestorm. One can also use versions of Singularity and Kokua. Starting out, I was in a basic "Ruth" avatar with a grey shirt and red trousers. Shortly thereafter, I was sent a teleport request to a huge platform over Angel Island by someone calling herself "Central Linden," one of the staff. When I asked about the name, I was told it was done as a tribute to Linden Lab. Prometheus has no affiliation with the owners of Second Life in any way. She handed me a furry feline avatar, which she told me had been copied and transfered from Second Life with the content creator's permission. 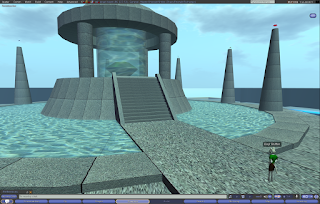 Chatting with Central, she told me this was the third version of the Grid, the previous two ruined. Pictures and patterns can be uploaded for free by those on the world, "We're technically ready now. Just need more people and more SIMs." As of now, there are four sims currently operational on the grid: Angel Island, Prometheus, Tail Raisers and Luna Lobo, "We're currently working on more Linden regions and people can buy SIMs." The number of people who are on is also small, about sixteen as of the writing of this article. 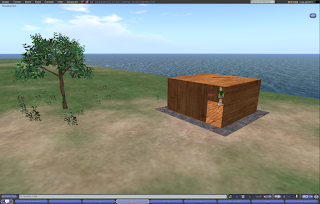 Stepping down from the skybox later, there was a build on ground level, named the "Emerald Temple."  In the other three, there wasn't much built at the moment. The Tail Raisers sim is for a club to be build in the near future for "inter-personal actions between players and staff in a relaxed atmosphere." At least one of the sims was in Skybox mode, in which I planted a tree, then used my limited building skills to make a small cubic shelter and a table.

Those interested in getting on can contact Central Linden or Artisan Sunspot via Skype. One can find a page about the grid here.

*Update* Less than two weeks after this article was written, one of the staff informed the Newser that Prometheus was offline, possibly for good.
Posted by Bixyl Shuftan at 5:00 PM No comments: