Introduction
Second Life and Entropia Universe are both virtual worlds, but they are not similar to each other. In this article I will review both of these worlds and explain what the differences are and which similarities they have and what makes them special.
Second Life ( SL )
Introduction to Second Life
Second Life is a virtual world where avatars can walk around and teleport to different places in-world. You can download the client software at http://www.secondlife.com, but there are alternative viewers available as well.
Your first steps into Second Life When you first sign up with Second Life you can choose from different types of default avatars and choose a name for your avatar. After your avatar has been created, you download the viewer of your choice and then login with your username and password.
You will first arrive at Learning Island, where the basics of Second Life are explained. This is the place where all new avatars arrive in the Second Life environment. After finishing the tutorial is a teleport to Social Island, though I suggest instead heading to  NCI ( New Citizens Inc ) at Kuula.
There is a real life cash economy in Second Life, where you can buy Linden Dollars ( L$ ) and you can also convert your L$ into USD or any other currency. You can also earn L$ by doing a virtual job in Second Life ( I’ll explain this later on in the article, so keep on reading, please ).
In Second Life you don’t really have game elements that are placed within the virtual world, at least not in most places. You can find games to play in Second Life.
The places you visit in Second Life are known as “sims” (short for simulations)
Account types in Second Life :
There are two account types in Second Life, Basic, or free accounts, and Premium, or accounts of which one pays a fee on a regular basis to Second Life's owner Linden Lab. 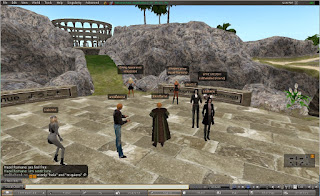 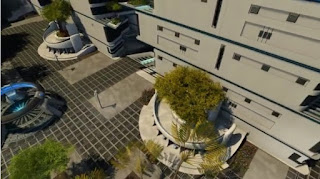 Entropia Universe is a virtual world/game, which takes place in the future and you are being dropped as a colonist on the planet that you choose to start on. There are six different planets and space in Entropia Universe. Each planet has its own properties and creatures. When you first sign up for an Entropia account, you need to choose on which planet you want to start. I chose Planet Calypso, and I did the tutorial there in Thule, the starting place. From there, I went to Port Atlantis where my adventure started.

The company behind Entropia Universe, MindArk, was behind all of Entropia's creation. The graphics are amazingly detailed and when you run into bushes, the bushes move when you run through them. Very high detail graphics are everywhere.

With Second Life on the other hand, the graphics are not that detailed. That is because Entropia Universe uses the CryTek gaming engine, which is used in the Crysis game series and a few other games as well. In Second Life, the Havoc physics engine is used. 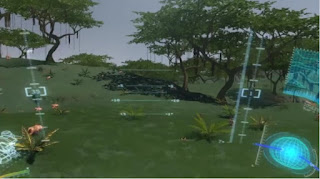 Another difference between Second Life and Entropia Universe is that your avatar can get “killed” by creatures that attack you when you shoot them. You are automatically teleported to the nearest so-called “revival point.” It’s basically a terminal where you are teleported to. Your health bar will slowly fill back up after a long while.

Speaking of terminals, here are some types of terminals you will encounter :
Hunting and Mining in Entropia Universe 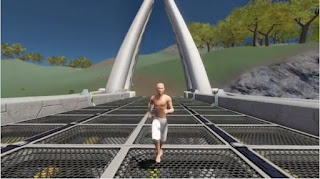 You can hunt down the alien creatures that you encounter in-world in Entropia Universe and you can loot them and get items from them and sell them if you wish. After the tutorial, at least on Calypso, you should have some guns and ammo available to you.
Mining I've read is much more difficult to do, because it involves many more skills than hunting does. I haven’t been into mining yet, so I can’t tell you more about it.
Missions you can do and get rewards for doing them
At some camps you encounter, you can choose to do missions, like in a normal game, if you succeed in them, then you get rewards, like guns, ammo or something else.
You can find the beginner’s guide at : http://www.entropiauniverse.com/entropia-universe/beginners-guide/
You can find the video tutorials at : http://www.entropiauniverse.com/entropia-universe/beginners-guide/video-tutorials/

Conclusion :
Although Second Life and Entropia Universe are virtual worlds, they take on a different approach and a different experience. This is due to the different graphical engines, and also the “game play” is different. Don’t let that scare you off, though, because it’s a worthy experience in both places.
For a Second Life resident, Entropia takes some getting used to, so keep calm and relax. But in the end you should get used to the differences and enjoy it, trust me.

Editor's note: In the past, Entropia has made real-life news by players buying up virtual real estate for thousands of dollars, such as the sale of the Crystal Palace Space Station, for almost a third of a million US dollars in 2010. So there is potential for a few devoted players to make some cash. However, there's no shortage of ways to make dollars in Second Life, as real estate barons such as Anshe Chung have demonstrated in the past, as well as clothing, virtual pets, and other businesses.
Posted by Bixyl Shuftan at 6:00 AM No comments: