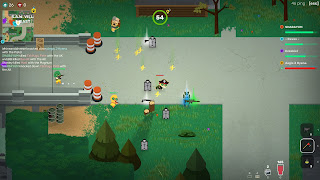 Recently I saw a couple of my friends playing a game called Super Animal Royale and decided to try it out. It's a free game on Steam, in the genre of battle royale games. You take control of a little animal and wander about the map picking up weapons (a shotgun, machine gun, assault rifle, pistol, or magnum, with a desert eagle added in the most recent update) and go on to shoot the other 63 animals that are in the map along with you. Weapons are color coded for rarity, with higher rarities having faster reload times, rate of fire, and the like. There's three tiers of armor, which can be repaired by finding duct tape scattered about the map and in boxes, and you can even run over enemies in hamster balls although it has to be in a dead-on hit as far as I can see.

Matches are short and fast, so this game is excellent for killing some time with friends or just chilling out rather than being truly competitive (at least, as far as I can see). The "free" version is no different from the paid version (about $13) except you can actually equip clothes for a basic appearance -- there's no microtransactions to fast-track yourself to be better than someone else. 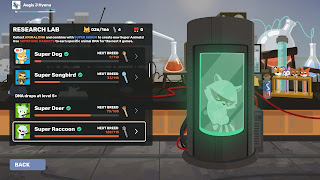 After each battle you gain "Animal DNA" that is used to unlock other appearances. You start with Fox, Bear, "Skullcat", Tiger, Cat, Dog and Songbird and there's more varieties every 5 levels (although I think you have to upgrade to the paid version to actually be able to use anything other than the beginning animals). No animal has advantages over another -- it's strictly an appearance choice.

Currently the matches are full of bots because the game is still getting off the ground. Lobbies before a match can hold 64 people, and if there are less than that in a lobby it populates with bots (I've seen as many as 26 people in one lobby before). You can play solo, or duo with another player; only the paid version can invite friends, if I remember right. The devs have said they'll unlock squads fully where four players can play together once more people start playing and the lobbies fill. 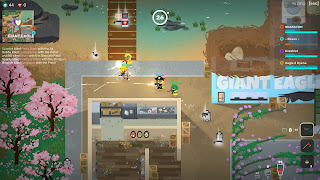 As of this writing, squads are open for the weekend in an attempt to drum up some interest.

If you upgrade from the free version to the paid version everything you've earned as drops for appearance editing carries over.

I like it for its cutesy style. It's a refreshing change from all the realistic gritty battle royales out there like Apex or PUBG, and I think it has the potential to be a real gem if the devs (who are active in their discord) approach it right. The community also isn't as toxic as most of the other battle royales I've seen (well, yet... this is the internet after all). I'm going to give it four dragon hoards out of five here, if only because I can't tell if it's a mobile game ported to Steam or not. It looks simplistic enough to be a mobile game, and I'm no fan of mobile games.

Addition: Aegis would later say,  "I've learned it's not a port, but I'm keeping it at four out of five to give 'room for improvement'." He would also say the four-person squad option was closing later today, so it'll be limited to solo play and two-man teams.

Aegis J. Hyena
Posted by Bixyl Shuftan at 6:00 AM 1 comment: