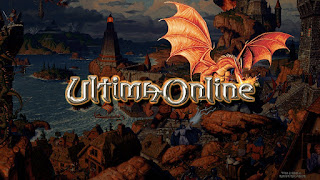 It seems people have been playing Massive Multiplayer Online games, or MMOs, for ages. It was twenty years ago yesterday. For many, the first they ever played was "World of Warcraft," which started in 2003. But MMOs have been around for a few years longer. It was twenty years ago this week that the first MMO that achieved much popularity, "Ultima Online,' was launched on September 24, 1997.


Ultima Online was a spinnoff of the "Ultima" series of games of which the first was sold in 1981. It's entry in Wikipedia describes it's beginning as "partially designed as a social and economic experiment" in which "the game had to account for widespread player interaction as well as deal with the tradition of players feeling as if they were the center of attention, as had been the case in single-player games." The idea for the game is credited to Richard Garriot. There were previous games that allowed hundreds of players at once, but "Ultima Online significantly outdid these games, both graphically and in game mechanics." The game was probably the first to have "a craft-based and player-driven economy," as well as offering progress through skill levels and player vs player combat. 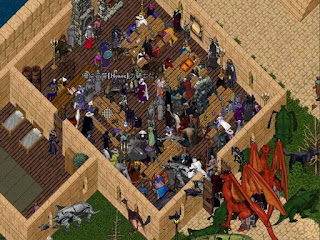 It is notable that originally, the game was going to include an artificial life engine that "would affect animal behavior, potentially creating new adventure possibilities in an organic manner." But it never made it past beta development as, "We thought it was fantastic. We'd spent an enormous amount of time and effort on it. But what happened was all the players went in and just killed everything; so fast that the game couldn't spawn them fast enough to make the simulation even begin. And so, this thing that we'd spent all this time on, literally no-one ever noticed – ever – and we eventually just ripped it out of the game, you know, with some sadness."

One of the games more memorable events occurred in it's beta in which the in-game alter-ego of Garriot, Lord British, was successfully killed by a player character. Lord British was supposed to be invulnerable to this kind of attack, but a server crash had made him vulnerable. This event is considered by some to be the most memorable event in early MMO history, and led to the saying "If it exists as a living creature in an MMORPG, someone, somewhere, will try to kill it." 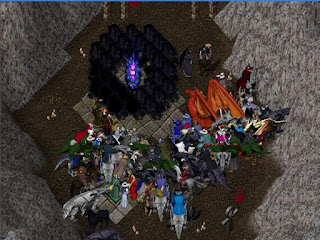 Ultima Online was the first MMO to reach 100,000 subscribers in popularity, having done so within six months of it's release, and by July 2003 reached its peak at around 250,000 players. But after this, the game's numbers would steadily decline, going back to about 100,000 in 2008 and then had less than one percent of the the total market share of MMOs, probably due to the introduction and great success of World of Warcraft which would dominate MMO gaming for about a decade. Developed under Origin Systems, in 2004 Origin folded and the game was managed directly by the parent company Electronic Arts. In 2006, Mythic Entertainment merged with EA, and the game came under it's direction. In 2014, control was transferred to the Broadsword studio.

Ultima Online still active. To celebrate their twentieth anniversary, they had a real-life party in Herndon, Virginia, near Washington DC. They also have a new content arc, "The Shattered Obelisk." So after twenty years, presumably with some of it's original players still at it and some new ones who weren't even born yet when it first came around, "UO" is still offering players the chance to do some monster clobbering and dungeonering.