Subnautica Below Zero has been out now since the end of January and is already causing quite a stir in the gaming community.  I have already logged over 200 hours in an Early Access game, with about 2 hours of prepared game play,  What I did, since I am running mine through STEAM, is log into the experimental option.

In the experimental option, there are daily micro updates to the game.  Some are obvious, others are simple bug fixes.  Some of the things they have added are, without having to use Console Control 'cheats', as I call them. You have a battery charger!  I guess enough players yelled and screamed, they finally added it, along with the power cel charger. 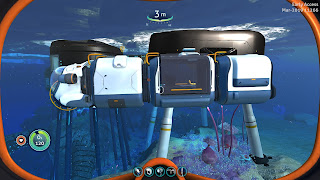 You now have the Sea Truck, along with three out of the five planned modules for it.  Fabricator, Aquarium and Storage.  You still have to search for the fragments, for each item and it takes three fragments each, to acquire the needed blueprint. When I first saw the blueprint for the Sea Truck and what it would take to construct one, I thought the developers of the game had lost their collective minds.  After chatting with other players, I find I wasn't alone, in this opinion.  The Cab alone needs a Titanium Ingot (which you can now make) two glass, three lead and 'FIVE"  *repeat  "FIVE"  Advanced Wiring Kits! One Advanced Wiring Kit is a major investment in resources, They want "FIVE" for the Sea Truck Cab alone.  *faints* Plus the only place to get the needed Table Coral is in the Twisty Bridges area aka DEATH VALLEY!  So nicknamed by me for the abnormal number of Crashfish and Brutesharks there waiting for you. 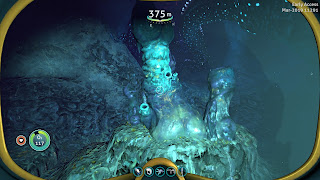 They have finished the DEEP Twisty Bridges area.  There you can find the fragments for two of the Sea Truck modules, also some Sea Truck cab too. Plus if your extra special, you can meet the Squidshark, who will enjoy sucking a bunch of your health off you.  The other nasty down there isn't as obvious, the Spikey Plant.  I lies in wait to ambush you if get to close.  Shooting a tendril out to grab you and drag you inside to "EAT' you.  You do need to traverse the area too anyways.  Way too many valuable and needed resources down there to ignore.  I built a scanner setup down in the Twisty Bridges, just to help me find the stuff easier, plus most important QUICKER!

They have also redesigned the Cargo Rocket Island, which I approve of.  They also fixed a few annoying bugs there.  You can find a boatload of resources too around the waters of the island.  It is known as the Thermal Spires biome..  You can meet the Rock Puncher and the old favorite Mr. Bone Shark. As to the Cargo Rocket, the first one is on Alterra, but needs repair.  After that, you need to construct any new Exchanger Rockets (two titanium). You will also find a base up there, make sure to scan 'everything' inside that you can.  That is where you will get the bulk of your blueprints to build your base. 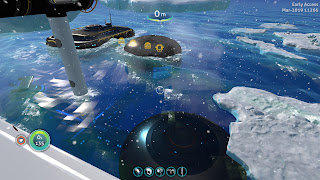 I found three other bases in the game so far just swimming around. Two have items you need to send to the Vesper.  The third one is under construction, but I did leave a beacon marking it's location, plus I got to see the new Snow Stalker beastie.  The little one is soooooo cute.   I also got a few plants I can plant once they give us something to grow them in.

The reason for so many hours is simple, the game breaks, so you sometimes have to start over to get stuff to load and or work right.  Welcome to early access.  Just make sure to pass along any problems, bugs or ideas to the developers, via Feedback.  Next major update is early April.  Can't wait.  Bwahahahahaha!

Rita Mariner
Posted by Bixyl Shuftan at 6:00 AM No comments: