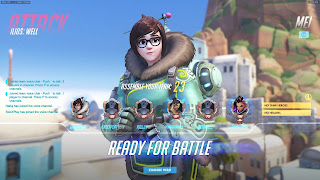 Blizzard entertainment has been around for a long time from the days of Warcraft to World of Warcraft and also Starcraft. Not a company to be lazy and bet everything on their cash cow, recently they came out with Overwatch: a first person shooter based on the game Team Fortress 2.

In TF2 you select a player such as a solider or a Heavy to take out the other team. To push forward a payload or capture a point. One team defends while the other attacks. Overwatch is very much the same game however it offers over twenty different roles to play. And unlike TF2 there are also women characters, not just men, to shoot and kill the other team with. Each team red and blue has six characters per side. You’ll see graphics to the side saying that’s there’s no tanks or too many snipers. 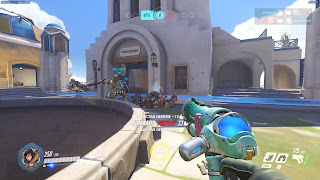 The characters are split into four groups to pick what role you wish to play. Attack does heavy damage but can only take a few hits. Defense is excellent at holding a point and slowing down the enemy advancing. Tank is there to take the hits for you so squishy characters don’t die. Healing/support is how is sounds to offer healing to tanks and extra attack. With the exception of the mech D Va, all characters when they hit zero hit points die. D Va gets ejected from her Mecha tank and gets a second chance to keep fighting with a pistol and low hit points.

In addition to brighter graphics and better voices each character has an ultimate that continues charging through death. So if you’re playing as Mcree a wild west gunslinger and die when your ultimate is at 99%. When you revive your ultimate will problary be 100% Over time when you block damage, heal, do damage and kill other player characters your ultimate builds up. An ultimate is something you want to fire off to change the course of battle. Mcree’s ultimate is him saying “It’s High Noon” in a western drawl and everyone he sees he shoots down dead. Mei’s ultimate a Chinese woman in an arctic snow suit is a blizzard which freezes enemy players. She shoots ice shards at long range. Her ice walls keep enemy players away and blocks damage. She’s a good defensive player if you want to play enemies off your point. 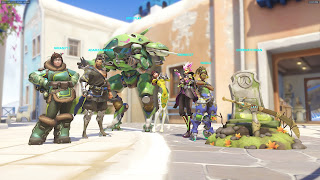 The sounds are much better with various voices that sound like professional actors with voices saying things such as “Love D Va!” Or Lucio a music loving healer will yell out “This is my Jam!” Another voice that will stick in your head is Reaper doing his ultimate when he says DIE DIE DIE!
The graphics are cartoonish but also bright and colorful. Even though the game is the same every time you play, each game tends to be different as you play at different locations. There’s also lots of variety in the twenty plus characters.

What the designers changed recently is that in quick play you can no longer have more than one of a certain character. Which means if I grab a D Va character as a tank someone else who wanted to be a tank could be roadhog or pick a Tracer to be offense instead. I guess Blizzard wanted to stop two of the same character so the other team wouldn’t over specialize and beat the other team. So when you master Solider 76,you can always master that defensive player Junk Rat with shoots bombs that bounce around and blow enemy players to dust. Or why not Pharah who flies and shoots rockets? 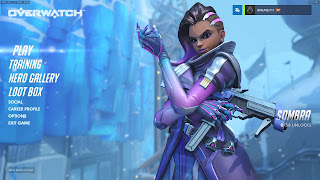 As you play you gain experience per match which levels you up. It’s not like a RPG though. You don’t get more hit points and new spells. Instead you get a loot box every level. The loot boxes give out skins for the various characters, voice lines, sprays and coins to buy what you want for your favorite characters. For example I bought an earthen skin  which is a deep green for Mei so she looks more masculine and not so girly. So your level of 50 might look impressive on screen. However that won’t stop a level 3 character shooting you down as Hanzo. Hanzo is a defensive player who is a sniper who shoots down foes with his bow and arrow. Level doesn’t mean anything as you play.

For the price of 40$ Overwatch can be yours as an excellent first person shooter. Blizzard has taken the idea of Team Fortress 2 and brought it to the next level of playability with great voice effects, the option of spray painting on walls and more. If you’re new to shooting games there is a tutorial so you’re not thrown into the game and you’re clueless as other players shoot you down. Also an option to fight AI enemies as well as a practice area.

If you’re thinking like Mcree that it’s high noon and you want to shoot some outlaws, Overwatch might be the game for you.

Grease Coakes
Posted by Bixyl Shuftan at 6:00 AM No comments: