While the Second Life "Furry Gamers" have been walking with dinosaurs in "Ark Survival Evolved" (when not riding or running from), it seems another group of residents from the grid has given the game a try. Readers may be familiar with the Second Life Universe Forums, the most widely used forums aimed at Second Life residents besides the official Linden ones. Sometimes irreverent, sometimes very useful, one thing they seldom are is boring, having a cast of posters whom have been at it for as long as ten years. 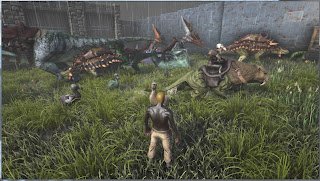 Well, as it turns out, they have their own Ark server. Nytewitch, as she's known on the forums, invited any forum user access to her server, though they needed to ask her for the password. Known as the SLUvivors, they've created a main base overlooking the middle of the island's east coast, and several smaller bases some distance to the north and south. Interested on checking things for myself, I asked Nytewitch, or Wytch as she's called in the game, for the password, and got it.

Logging in, I had some minor trouble getting started, but was soon going about my business on this server for the first time. As it turned out, Wytch happened to be on. After some chat, she invited me to her base. She found me just after I found the water pipe to it and beat off an attack by two dilos. She had come over on a pteradactyl with another following, and invited me to fly over. So I did, but apparently I attracted the attention of a dragonfly. Maybe it smelled the blood from the fight, but it went after me.

The SLUvivors' main base had a building, a garden, and a yard full of dinos from trikes to raptors and others, including a sabertooth tiger. I landed, and the bug attacked me. And the dinos all went after it. It was quite a scene, described in the forums: 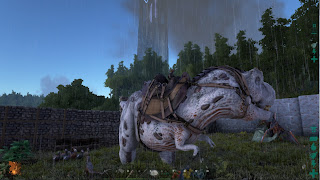 As Wytch later put it, worthy of a country music song. Guess I make quite an entrance where I go.

I didn't see the Rex until later. And when I did, I'd gotten my first T-Rex ride outside of Second Life. 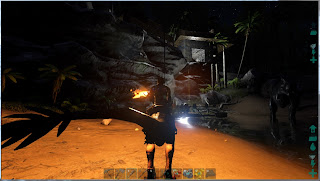 Back in Lomgren's server, the Second Life microkitty continues to make progress on his own server. He leveled enough to learn how to make a generator, and before long there were electric lights around his base as well as refrigerators. "We're almost civilized," the 6 inch microkitty turned 5 foot human commented. It wasn't hard to imagine survivors having spent months in primitive conditions being overwhelmed at the sight of electric power. 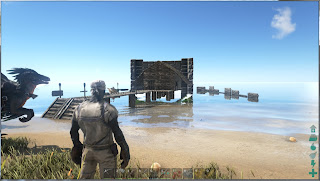 But electricity takes power. And the source of power for modern equipment is oil. While some can be gathered from the trilobites that occasionally make their way onto the beach, the real source is oil deposits from the sea. To get at those, you need water based mounts, such as the dolphin-like Ichthyosaurus and the huge Megalodon sharks. To house them, Lom made a water base that looked like a pier area. To stay underwater for long, one needs to have a serving of "Lazarus chow," which slows down the need of oxygen. 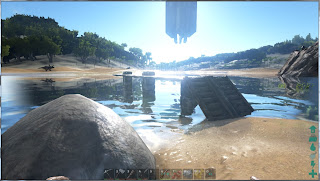 So what have I done? Mostly level up by making narcotics (for the dinos, not us). But I have started work on a bridge from the Footpaw where the base is to the Southern Jungle. Lom and I sometimes notice drops way off to across the wide river, and are miffed at not being able to get the high ones because water has sharks and phirana. So far, the bridge is  almost halfway across (progress made since the picture to the left, with no interruptions by sharks (yet). But eventually we'll have our feat of engineering.

As for the two public servers I was in, I kept dying off in the Player vs Environment one, so have OC Official Server 160 another try. I made my way to the Footpaw and found the place where Lom set his base unoccupied, and started work on a base there. So far, most of my encounters with neighbors have been friendly ones, but there have been a couple of raids, so there are some pirates out there, and more work to do on the base.