When it comes to computer games and marriages, we often think of the electronic entertainment as a source of friction between a wife who couldn't care less about computers and a husband who is unable to put aside the addiction he developed while single. So when we hear about a couple that goes dungeon-whomping together, it sounds like a match made in heaven.

But what happens when one of the couple passes away? What happens if it is "game over" for a gamer's "player two?" 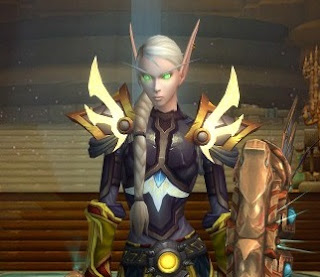 This week someone posted a link on Facebook to a thread on the "World of Warcraft" forums, "I May Be Done," in which an "Acktion" described how he and his wife ended up playing the game together for years, and his loss and sorrow now that she was gone.


My wife passed away on 10/05. They say the fact I was sitting right beside her, waiting for her to wake up so we could hit Darkmoon Faire and Brewfest together and had no idea when she left is a good thing. That it means she was at peace and the transition was easy and painless.

I don't know anything about that. I'm trying to take their word for it. But, all I can feel right now is pain and loneliness.

I had actually picked up World of Warcraft when it first hit the shelves out of Beta.

I corrupted my wife to it sometime during Burning Crusade.

By the time Cataclysm came out, we were both housebound disabled. At the time, it was more difficult for me to sit up and play for very long than it was for her. I managed, but frankly only because she wanted me to play with her. And then, not for very long before I had to rest.

Sometime in Mists, we corrupted her son (my step-son) to our WarCrack addiction (and she somehow managed to finesse our much reduced finances to pick up a second account since she no longer had room to make new characters) even though she'd become largely bedridden and played from a laptop on a hospital style lap tray.

Sometime during Warlords of Draenor, he got married and his wife joined our band of happy fanatics.

Ok, mostly I was playing because she was pleading, begging, or nagging me alternately to come spend some time doing one of the few things left she could enjoy as she became bedridden and it hurt her for me to touch her most days.

She loved World of Warcraft. Perhaps I did too, but it was mostly my love for her that drove me to continue adding expansions I could no longer fully explore since raids and pvp and many of the things I once enjoyed were beyond my declining abilities.

I cancelled both of her accounts less than thirty minutes ago.

Sharley will no longer be running beside Acktion.

Lubov will no longer be guarding Panaceah.

All of the characters I have built specifically to run amok with my beloved are now as alone as I am in this home we once shared.

The game has been brought up by our children whom I couldn't love more if they were flesh of my blood, by friends who have stopped by or called to give their condolences. I have told them that I'm not sure if I will ever be able to play again. And I'm not.

Just hours before she slipped from this mortal coil of Earth, my beautiful bride was logging out of Azeroth content because she'd managed to take, if not all sixty characters, at least the ones she was going to this month to the Darkmoon Faire to do their profession quests.

Right here, right now, I think I vastly prefer to remember her competing with me to see which of us leads our guilds in achievement points than visiting Azeroth without her.

That may change. I may be lured back by our friends and family. But not for awhile if ever.

In the meantime, thank you Blizzard for giving her Azeroth to make her last years on Earth so pleasurable for all of us who ran with her.

As of the writing of this article, there were thirty-seven pages of responses, and growing, "This was the most beautiful, yet heart-wrenching tribute of love and life I've ever read." Mostly of people expressing their sorry and trying to offer comfort, "If you decide you want to return to Azeroth someday. We'll still be here, and we'll welcome you back with open arms." "I've sat here for several minutes trying to figure out what the hell to say, or how I can help. I'm not sure how much it matters, but know that we're here for you." Some had their own stories of loss. One brought up a poem that was part of one of the game's quests. One of Blizzard's forum managers would post, "Blizzard sends its condolences to you and your family as well friend. Thank you for telling your story and it warms my heart to see that something we do had a part in it. Loss is never easy but it does get better. Take all the time you need. Real life always comes first."

The man, under his other character name, would later comment, "I realized at the time I wrote it that the overwhelming majority of WoW players would have absolutely no idea who we were or, if we are honest, care much beyond a brief  'oh, that is sad.' But, Lubov (or Sharley on her Horde main), did have many friends in the game that I felt I should at least try to let know she was gone. And this was the only way I could think of. I certainly didn't expect such an outpouring of warmth from strangers. Well, strangers to me, although she might have known you. I'm afraid she was the one who was good with people. And I definitely didn't expect to be notified that my post here on her behalf would be picked up elsewhere as well."

"for what it's worth, I (the OP) and our son, are aware of the outpouring of well wishes both here and other places my original post has turned up. We do thank you for those well wishes and, indeed, feel the comforting touch of my wife and his mother in your kind responses. Thank you. ...  Peace be with you all. Don't forget to make your own day as good as you can. And anyone else's you conveniently can as well. Your support voiced here has helped ours immensely."

When gaming communities at times seem full of little or nothing but immature players who think of nothing but themselves, this is a reminder that they're full of people with heart.