While the Newser and Second Life blogs have covered lots of events in Second Life, there's been no shortage of things going on with some of the games we like.

"World of Warcraft" has continued to develop, with a new Blackrock Dungeon. But what's gotten more chatter is the release of something new: the WoW token. The tokens are intended as "an in-game item that allows players to simply and securely exchange gold and game time between each other." In other words, an alternative to buying WoW gold from third party services, which has always been against the rules and could get players suspended or banned.

WoW tokens are purchased from the ingame store for $20 US dollars ($25 Australian Dollars), up to a total of ten over a 30 day period. They can then be sold on the auction house for gold. Once bought from the auction house, they can be redeemed for 30 days of game time.

The tokens were first up for sale on April 6. They were initially valued at the Auction House for 30,000 gold. Demand caused the price to rise for the first few hours. Then the value plummeted to 22,405 gold, a drop of more then 25%. People wondered if it would continue, but the slide halted, going through smaller rises and declines. There was a limit to the number of tokens which could be purchased from the Auction House, but Blizzard soon raised it.

For fans of Star Wars, the MMO aimed at them is "The Old Republic." Before that, there was "Star Wars Galaxies," which was released in 2003 and continued to December 2011. Among those involved in the design was Ralph Koster. In his blog, he recently talked about one of the challenges in the game: jedi characters. Jedi have access to all kinds of powers, but the trouble is "by comparison, everyone else sucks." There was also another issue, in the time perios of the movies, the Empire was hunting down anyone with the potential to be one. So Ralph had a "crazy idea." If people wanted to have the potential to be a Jedi, let them, but there would be a catch. 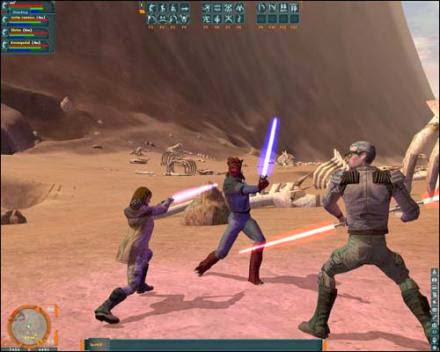 You see, the moment you used Force powers within view of anything or anyone Imperial, or indeed any player, they could report you to the Empire. To Darth Vader’s Death Squadron in fact. And that generated someone to come after you. After first, just lowly Stormtroopers. Eventually, cooler characters, such as some of the bounty hunters like IG-88. Eventually, really cool ones like Boba Fett or fan favorite Mara Jade.

These would be brutal fights. Odds are you’d just die. So hiding and training very carefully would be essential. But it wouldn’t matter, of course. As you advanced, your powers would get “noisier” and cooler. You wouldn’t be able to resist using Force Lightning in a crowd, or equipping your lightsaber in view of some Imperials. And eventually, after Boba Fett and Mara Jade and everyone else had failed, well, that would be when Darth Vader himself bestirred himself to take care of the little problem.

And you would die. It would be rigged.

And you didn't just die. You'd have to start over with a new Level 1 character, as the old was was permanently dead, aka "permadeath."

Another idea was how these players would develop their Jedi powers, what Koster called "security through obscurity." When created, a different set of actions was determined for what it would take for them to progress. Anyone could become a Jedi, but how to become one would be less than clear. The intention was to limit the number of players whom would actually finish these quests to become a Jedi, making them rare but powerful, like they were in the stories.

But as it turned out, neither plan left the drawing board. The idea of  "permadeath" made the designers nervous, and there just wasn't enough time. The game was to be released in June 2003, and so they just didn't have the time to develop this idea. 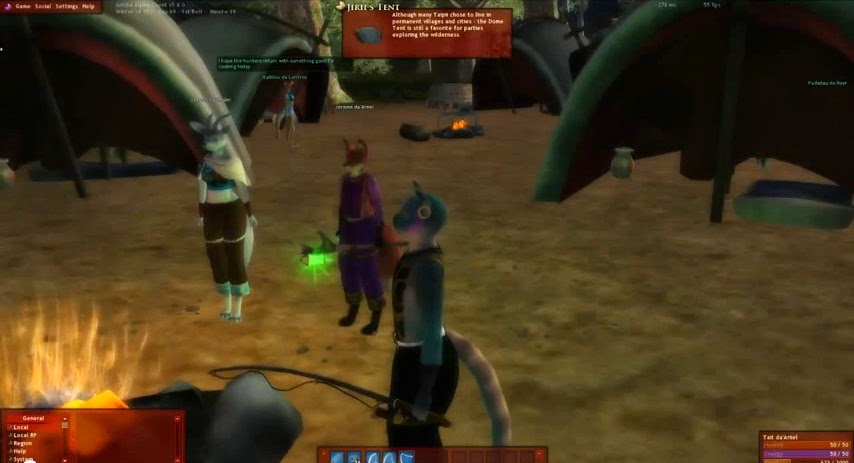 A few readers have mentioned Antilia, a fantasy MMO in development with all furred races. Despite some Kickstarters, efforts to raise cash to help develop the game have been less than successful. So after some years of the game still in alpha, the team has decided to bite the bullet. It was announced that they will not be making the game an MORPG, at least for now.

"We've come to the conclusion that we really want to get something out there with Antillia. What we're going to have to do to make that happen is find a way to make the project simpler. ... The easiest way to do that is to cut out the massive multiplayer online portion." (video link)

The good news, there will still be a multiplayer option. And they haven't completely given up on the idea of an MMO. They'll just have to wait until they have the money, and resources, to develop Antilia to that.

Posted by Bixyl Shuftan at 6:30 AM