On Thursday August 6, Blizzard announced details of World of Warcraft's next expansion: "Legion." While the full details of the plot have not been announced, the trailers announced the big detail (https://www.youtube.com/watch?v=N6CWue7voA0), the return of the Burning Legion.

To those who know little about World of Warcraft, the Burning Legion (http://wowwiki.wikia.com/wiki/Burning_legion) is an army of demonic creatures whom invade and destroy world after world in their lust to consume magical their magical energies which has twice invaded Azeroth and have been the source of many of it's problems. Now once again, they are back, and it will be up to the players of the Horde and Alliance to stop them.

There are a number of details known about the expansion. There will be a new continent: The Broken Isles. There's also a new class, the Demon Hunter. Players can now level up to Level 110. There will be Class Order Halls and followers. Promised are Artifacts, customizable weapons that can grow in power as you level up. Promised are a redesigned "Honor system" for PvPers, improved transmorgification, and "improved social features." Those buying the expansion get a free character boost to raise one character to Level 100 (almost certainly the minimum to get to the new zone. And there will be new dungeons and new bosses. 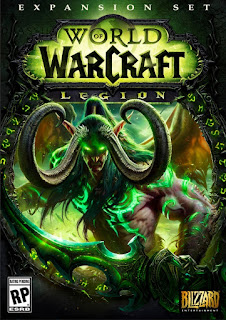 Demon Hunters can only be from one race of each faction: Night Elves for Alliance, Blood Elves for Horde. They are the second "hero class" of the game, the first being the Death Knights introduced in "Cataclysm." So they will have unique features that make them stand apart from other classes, possibly including a higher starting level, a unique power bar, and a unique mount. But if the Death Knight is a guide, that means anyone wanting to create a Demon Hunter character would need to already have at least one character close to Level 100.

"Dominate your foes as a Demon Hunter, an elven outcast shunned for daring to wield the terrible powers of the Legion," Blizzard said. "Exhibiting superior mobility and a preternatural sense of awareness, Demon Hunters can tap into forbidden powers at times of dire need, metamorphosing into terrifying fel forms. Focus on Havoc to demolish any who stand in your way with fiery demonic attacks, or specialize in Vengeance and go toe to toe with even the most powerful demons, withstanding massive punishment as their attacks fuel your hatred."

While some World of Warcraft fans are happy to hear of the expansion, the announcement comes after less than happy news about the game. One of the game's staff recently left the company for NCSoft, which works on a number of games, including Guild Wars 2 and Wildstar. But the big news is the number of players in the game are becoming fewer and fewer. According to an article in Gamezone, the number of subscribers was last counted at 5.6 million. While this still makes them the most popular of all MORPGs, this is a sharp plummet from their slightly more than ten million in November 2014.

When one looks at their numbers over time, their current expansion brought a short term boost to subscriptions which had been slowly declining over time from twelve million in 2010 to 6.8 million in June 2014. But it didn't last as just a few months later in March 2015, the statistics showed a plummet to 7.1 million. The game had fallen as fast as it has risen, and resumed it's slide to a number not seen since December 2005, a nine year low.

So why are the numbers still falling? Opinions vary as to why. Perhaps after over a decade people are starting to get a little tired of the game. But there are other points of view. Eliot Lefebvre of Massivelyop.com was rather critical of Blizzard in it's development of World of Warcraft in recent years, "Blizzard has a track record that is ... let's be generous and say 'not great' at the moment. ... this expansion is delivering a lot of things that players have said they want for quite some time, but it's also doing so at a time when player confidence in the development team is at a pretty low pulse. ... 'Legion,' at this point, is inheriting a mess." Like others I've heard complain about, once they saw Hellscream meet his end, for many non PvPers there just didn't seem to be much to do, "(The) Endgame for non-raiders is an unpleasant punchline."

"What we need in the next few months are details," Lefebvre stated, "and the more we know, the more we can decide this is reversing the trend of the last three expansion, or another step down."

Leif Johnson of PC Gamer was also critical of Blizzard, beginning his article, "We're about nine months into World of Warcraft's 'Warlords of Draenor' expansion, and I can't remember what any of my guildmates look like. ... We've stopped raiding, and we're all too 'busy' when we're online together. We're picking herbs or mining ore. We're preparing work orders. We're finishing quests with NPC 'bodyguards' to get more oil to launch naval missions for gear. And the worst part? We're all doing the same things on our alts. This is what much of World of Warcraft consists of these days, and it's awful. As a while, it's easily the worst expansion for Blizzard's beast to date." The title of the article summed up his feelings, "World of Warcraft Desperately Needs It's Next Expansion."

So is Blizzard panicking over it's cash cow not making so much? Maybe not. Their quarterly report showed that between three of their other games, "Hearthstone," Heroes of the Storm," and "Destiny" have a combined 70 million registered players, and have made 1.25 billion dollars. "Blizzard is demonstrating that they're able to adapt to the new world order pretty well."

No date has yet been given for the release of "Legion," but it's a good bet it won't be for at least several months. In the meantime, there are no signs of World of Warcraft's decline stopping, and the game is likely to looks hundreds of thousands of players between now and then.