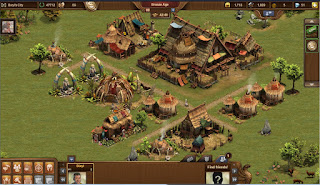 One game that I've been seeing commercials on television for is "Forge of Empires." This strategy game was developed by Innogames, and can be played on one's browser, on Facebook, or as an app on a tablet or mobile. It was first released in 2012, and is described on Wikipedia as having 10 million players a year later. In the game, the player starts out as a small village in the stone age, and through the players progress, the people grow in size and technology through the eras. 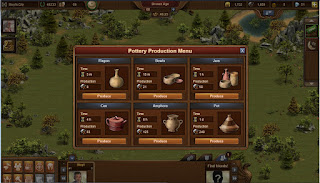 Most of the action occurs on the city screen. Your city has a population, which is calculated through the number and type of residential buildings you have. Coin is collected from these residential buildings, which depending on the building can be from every few minutes to once a day, and the town hall which has more coin once a day. Besides coin,  you need supplies to build things. You get most of these though production buildings, which require a certain number of people. Supply buildings have a choice of six items to produce, from a small item that takes five minutes to a large one that takes twenty-four hours. Your people have a happiness level which goes down the more people there are, and when unhappy you get a penalty to coin and supply production. To make them happy, or even better enthusiastic as that gives you a production bonus, you can build either cultural buildings or decorations. Decorations take less space, but generally give less happiness. Both residential and production buildings have to be connected to the town hall by roads. 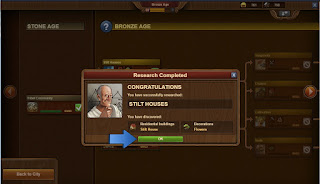 At the very beginning, you don't have the ability to do much, build trails, and stone age huts and hunter camps. By going to your technology screen and using Forge points you can research various technologies, which allow you to build military and cultural buildings, better residential and production buildings, decorations and roads, and more. The first few technologies  in the Bronze Age don't cost anything beyond the Forge points. Then they will start to cost a little coin and supplies, and in the Iron Age will start to cost some goods as well. The higher the technology, the more coin, supplies, and goods it will cost. Once you enter a new age, your town hall upgrades, and you get a few new abilities and a few other rewards such as a little coin and supplies. Beyond the Bronze Age is the Iron Age. Then come the three Medieval Ages, Early, High, and Late. Then com Colonial, Industrial, and so on. Eventually, one gets to eras beyond the present day that can only be imagined, the Arctic and Oceanic Future eras. 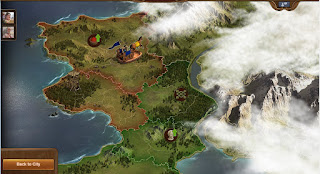 Military buildings are where your soldiers are trained. They require a certain amount of population available to build. Military units are used to both defend your city from other players, and one of two ways of acquiring areas on the continent map where you make your empire. You can either conquer an area by defeating the local forces in it's parcels, or you can negotiate and trade goods for parcels. Goods are produced by goods buildings, and have settings of four, eight, twenty-four, and forty-eight hours. They are needed to trade for parcels, and beginning in the Iron age to acquire technologies. Goods buildings only produce a few goods, unless you control an area that contains the good, in which case you get a production bonus of that good. Once you control an area, you can send scouts into neighboring ones to explore them. Sectors have a small reward  for taking them over by either peaceful or military means, either a little coin or supplies. Taking over an area grants a larger reward, either a production bonus, expansion, PvP Tower, a larger amount of gold and supplies, or medals. 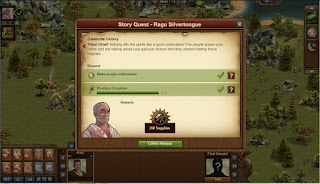 Quests are a part of the game. These are given by personalities, such as advisers, foreign rulers, and others. The first ones help you learn the game by teaching you how to play. But they also offer rewards, such as coins, supplies, goods, military units, or even diamonds (more on those later). But they also add a sense of plot. Some quests can be skipped by pressing "abort," though they key ones can't be skipped. Some are a little silly, such as challenges and jokes from the jester. Others pit you against an adversary whom will take a number of quests to defeat. As you progress in eras, your advisors' clothing will change to reflect it. Eventually, you gain a close and trusted friend.

Eventually, you're going to run low on room for new buildings. Expansions will enlarge your city limits by a 4x4 area. They can be acquired by gaining territory, technological resources, or gaining enough medals. Over time, expect to make harder choices about how to use the land on your city as your next available expansion is quite some time away. 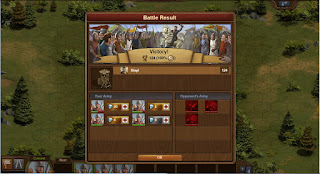 There are other players in the game. You can either help them by motivation a residential or production building, or by polishing a cultural building or decoration. Or you can attack them. When a player is attacked, the computer handles the defense of any military units the player has chosen for defense (if the player forgot to select, it's an easy win for the attacker). Beating the defense means the player has a choice of plundering a single building that produces coin, supplies, or goods. If someone is friends with you, he can't attack you or vice-versa without dissolving the friendship. Players can also form and invite people into guilds.

Being nice has a couple benefits.  You get a tiny amount of coin, and have a small chance of finding a blueprint. These are used to make Great Buildings. Players can also trade goods. This is desirable as your map will contain on average only two goods bonuses per era and you only have so much room in your city limits. If you need goods of a higher era than you produce, be prepared to trade slightly more of your goods to them, such as 25 marble for 20 iron, or 30 iron for 20 glass. You cannot offer more than twice the level of goods for another good. So eventually it will be desirable to shut down old goods buildings. 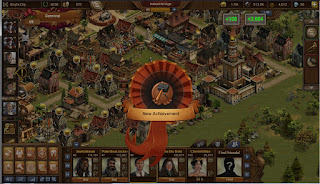 Great Buildings can be thought of as world wonders. They provide a combination or two special benefits such as city happiness, goods production, coin production, supply production, or attack and.or defense military bonus. To make a great building, you need at least one of the nine different blueprint pages of it, and the required number of several different goods. Each era has several different Great Buildings. It's possible to construct a great building after the era of it's designation. 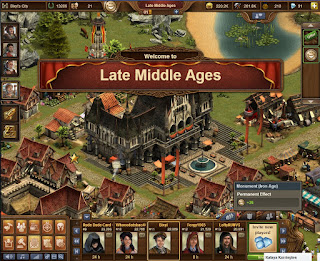 Throughout the year, there are special events in which there are special additional quests. These can be holidays, the anniversary of the birthdays of famous people in history, or special events such as the World Cup. Sometimes there's also a minigame that offers points for a chance for a prize. These can be either decorations, coins or supplies, or maybe a special building that offers combinations of benefits not unlike a Great Building, but not as great. For completing special events questline there's usually a reward of some kind, often a special building and a portrait for your profile. Speaking of your profile, every so often the gave grants you an achievement, such as for having so many residential buildings or having produced to many supplies. You can post three of these achievements there. 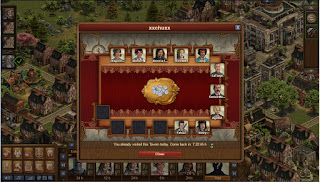 One nice little minigame is the treasure hunt quest, in which you sent someone to get some treasure. These take a certain amount of time, after which he appears and will wait for your for a certain amount of time. If you pick up the treasure in time, you can send him off for a larger treasure. The first hunt takes just five minutes, a little coin or supplies, and has to be picked up within an hour. Larger ones take more time to complete, but have more rewards such as more gold or supplies, medals, or goods. The last hunt takes eight hours, after which the hunts start over.

One recent feature added is the tavern. Only people you've friended can visit your tavern, and vice-versa. As your friends visit, they fill up your chairs and put a few "tavern silver" coins in your collection plate. You also have a small chance of picking up a little silver and a forge point when visiting a friend's tavern. Taverns are small and simple at first, able to seat only a few people and without decoration. But tavern silver can be used to build and decorate them up and eventually they can become fancier places able to seat many people. Tavern silver can also be used to purchase bonuses for your city in the tavern shop, which can grant a resource boost, a boost to your military, or speed up your building time for a little while. Since the larger the tavern, the more silver is collected, most players concentrate on building up their tavern until it's quite large and fancy.

It will take many months of game play to reach the end of the Colonial Era, and the end of your first map. But as is so often stated, it's not the end but a new beginning. Beyond that are additional maps, and quests across your globe. If you like city and empire building games, especially those with a sense of history, Forge of Empires may be for you.