When checking Steam for games the other day, one that got my attention was "Wasteland Survival." It's the sole game offered by Joyloft Co. Limited. The type, a survival game in which one fights zombies. The price: Free to purchase. The game had gotten mixed reviews. Deciding to check it out, I downloaded it, which took only a short time, and started playing.

The opening scene was that of an unconscious man having washed up on a beach being woken up by a friendly dog, happy to find human company. With no sign of the owner, what's left is to look around the area. Going about, you find a few tools and weapons. You also come across a few low-level zombies that are easily beaten. You can equip a weapon by dragging  it from your storage to one of the two weapon slots on your inventory page. You can also wear clothes by dragging them onto your legs, torso, and head spaces. Your main screen has an action bar on the bottom with two weapon spaces and a space that can hold an item such as bandages or food.

Your character has only so many hit points, which are reduced from zombie attacks. Your character also gets hungry and thirsty, with your hunger and thirst levels steadily going down. Once either reaches zero, you will start to take damage. To stave off thirst, you need to drink bottled water or eat food with water content such as berries. To take care of your hunger, you need to eat food such as canned beans, berries, and more. Eating also replenishes your hit points, some foods doing so better than others. While you can find monster meat off some zombies, it's not recommended for eating (but does have another purpose). 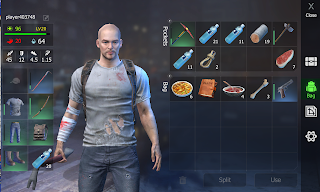 You can also craft items. At the start, you're limited to just a couple tools, the stone hatchet and pick, a few weapons such as a baseball bat, bandages, and a couple items of clothing, survivors' shirt and pants. You can also build structures such as floors and walls, storage containers, a garden to grow food, a campfire to cook food, a rain barrel to get water, and the kennel for your dog, which you'll need to finish for it to travel with you. And the way you get the materials for this is to gather them. You can gather grass and an occasional log and stone on the ground. You can also chop trees for wood, pick bushes for edible berries, and pick rocks for stone and iron ore. Zombies can carry cloth and occasionally rope or some other material. Crates can carry bottled water, canned food, glue, bars of iron, and others.

To get items, you'll have to search other areas. At first you're limited to just a few, the lush woods, the small mine, and the novice hunting grounds. The woods has more wood, the mine has more rocks that deliver iron ore, and the hunting grounds has critters that drop meat you can cook, leather and hides you can use to craft, and bones you can feed your dog. Sometimes two other areas will pop up. A crashed plane has a number of suitcases you can open that you can find items from dog food to better clothes and more. This is about the only zone that's zombie free, but one place may explode and damage you for a few points. The airdrop is the most dangerous of these early areas as there are zombies that can quickly rush up to you and quickly kill you. So here you'll need to be ready to make a break for it and retreat. 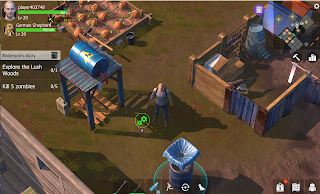 Of the zombies, the first ones you'll encounter are no big deal, slow, lumbering, and taken down with a few wacks of a baseball bat or one or two. But if you've played "Left 4 Dead," you have some idea what's to come. Later on are "Coneheads" whom require more hits to kill, and the "Ironhelms" that take a lot more. The "Batters" can quickly run over and proceed to pound you with their baseball bats, dealing more damage than the Coneheads and Ironhelms. The "Bloaters" can deal heavy damage in close combat, and will spew acid that not only hurts you but can slow you down. But the most deadly of the zombies you'll run into early on are the "Engineers" and "Spitters." They will quickly catch up to you and kill you with just a couple blows. Spitters in particular are to be watched out for as not only can they outrun you, but they sometimes can detect you from long distance and make a beeline to you. And if they catch you while stopping to eat or drink something from your backpack, you'll likely end up dying - and losing your stuff. I eventually got the hint to put food in my action bar instead of bandages.

Eventually, you'll start to start to stink, or "smell of aged cheese" as your character puts it. It will happen faster if you have to take a pee. This means the zombies can smell you and detect you easier, which can be inconvenient if there's a crate with zombies nearby you don't want to tangle with. Build a shower and have bottled water on hand to take care of this.

Early on, you find a body with a diary. Each page will give you a mission, and in carrying them out, you read more of the diary and get a small reward. If you play daily, you'll be given a reward once a day. Sometimes it's a pickaxe or bow. But once in a great while, you'll get something valuable like a shotgun. There is a trader in the game, offering items like ammo, but he demands high prices for his goods.

If the zombies in the zones weren't bad enough, once a day a horde will head to your base. If not stopped, unless your base has defenses, they will damage it and possibly take some things from your containers. At first, they're just a few not too tough ones. But as time goes on, they get more numerous and some more dangerous. Early on, you have an automatic turret that can help as there's some ammo boxes you find. But it's useless when they run out. Building barricades will cause the zombies to attack them first before nearby buildings (if the obstacles are between the buildings and the horde) and damage themselves. The first ones will be killed, but a horde will eventually smash a barricade. More barricades will stop more zombies. But eventually the horde will have a powerful boss zombie at the end that just smashes them with his weapon. If you're around when they make your attack, you have a chance to stop any damage. You also get a small reward if you stop the attack. 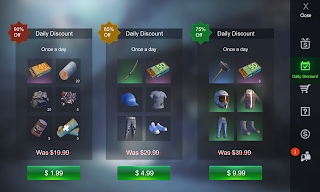 Dying in the game means you end up waking up back at your base, without your clothes or any other gear you had when the zombies caught you. You have ten minutes to get your gear before it vanishes. But if it was a Spitter that killed you, it will be waiting for you. You'll need a gun, preferably an automatic rifle, to take it out. Otherwise you'll have to say goodbye to whatever you lost, which can be very, very, aggravating.

As you progress, you'll get points that can be spent for extra abilities, for you and your dog. You'll also be able to craft more. Some builds allow you to make goods, such as the furnace will allow you to smelt iron ore into iron bars, and sewing machines can turn grass into cloth. Some are two-part builds. One automatic crossbow build turned out to be only the base, with the top requiring materials I hadn't found yet.

Early on, I found a pistol. This made progressing not *too* difficult. That is until a Spitter caught me while I was eating and clobbered me. And in trying to get back to get the gun, it clobbered me yet again. So it was goodbye gun, and slow progress as I had to find the stuff to make my clothes and new weapons. And more than once the Spitters and Engineers would get me before I'd gotten a full set of decent gear and weapons.

The game often offers me a shortcut, dangling items like weapons if I pay up some real cash. Considering the aggravating setbacks, I can imagine players fed up with the slow progress going ahead and paying cash so they'll have a working gun or a machete so they have a chance against the Engineers and Spitters. It would seem this is how this "free" game makes money for it's creator.

On the plus side, it doesn't seem to take too much processing power to play. I'm able to run it and Second Life at the same time. It also pauses if some things, such as the SL viewer, are what you're using at the moment.

Wasteland Survival will likely frustrate you, but it's unlikely to be boring. If you want fast progress though, it's probably best to pass this game and head for another of the survival genre. This game will have you grinding a lot as you keep searching for supplies to rebuild the gear you lose to the zombies.

You can get the game for free on Steam: https://store.steampowered.com/app/1044200/Wasteland_Survival/