Scenes From The InWorldz Fifth Anniversary 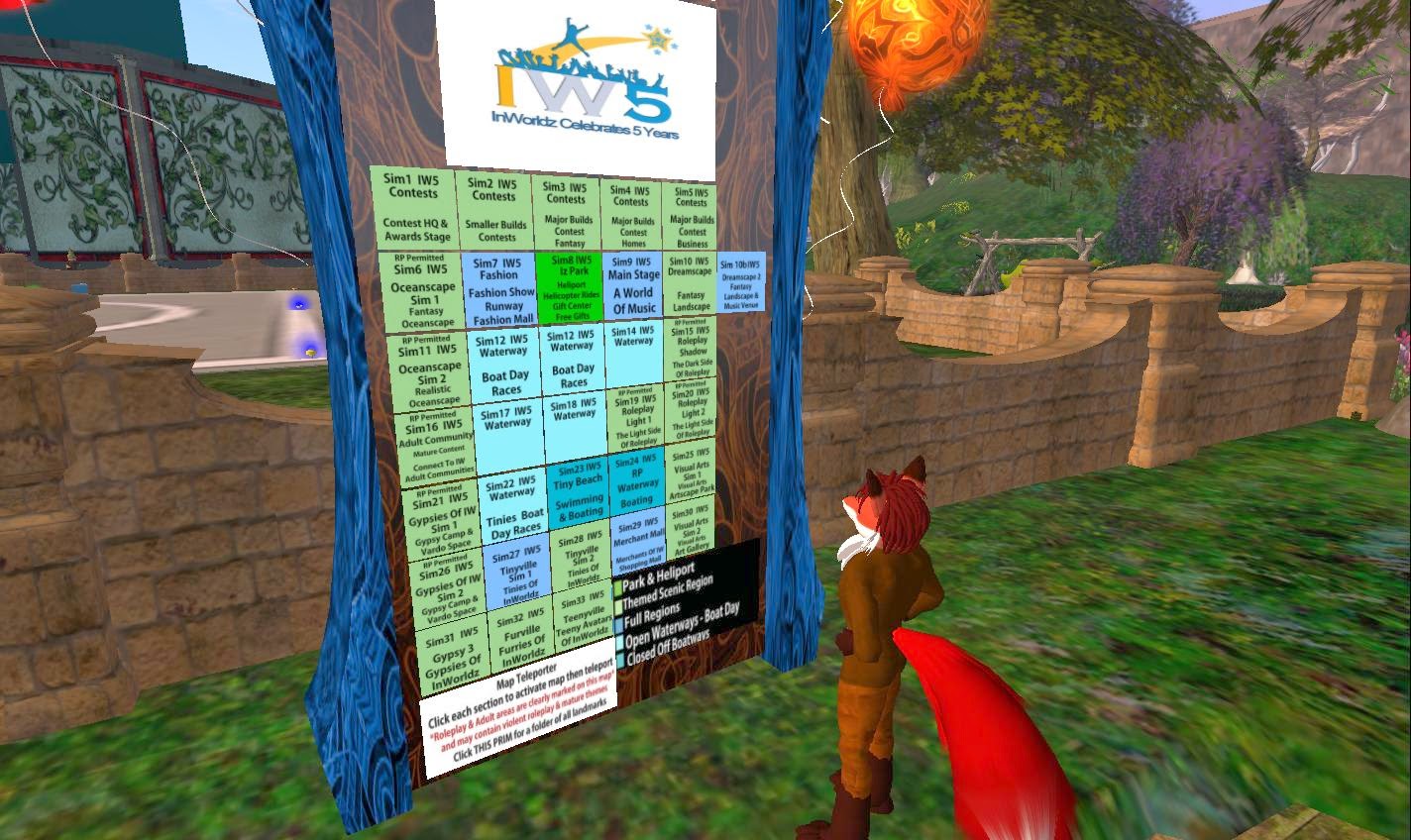 On Sunday March 16th, InWorldz began one of it's biggest events this year, it's fifth anniversary celebration. A few dozen sims had been set up to be the location for some celebratory builds for this milestone in the virtual world's history, as well as some events. I went there to take a look at what the IW5 as it's come to be called had to offer. 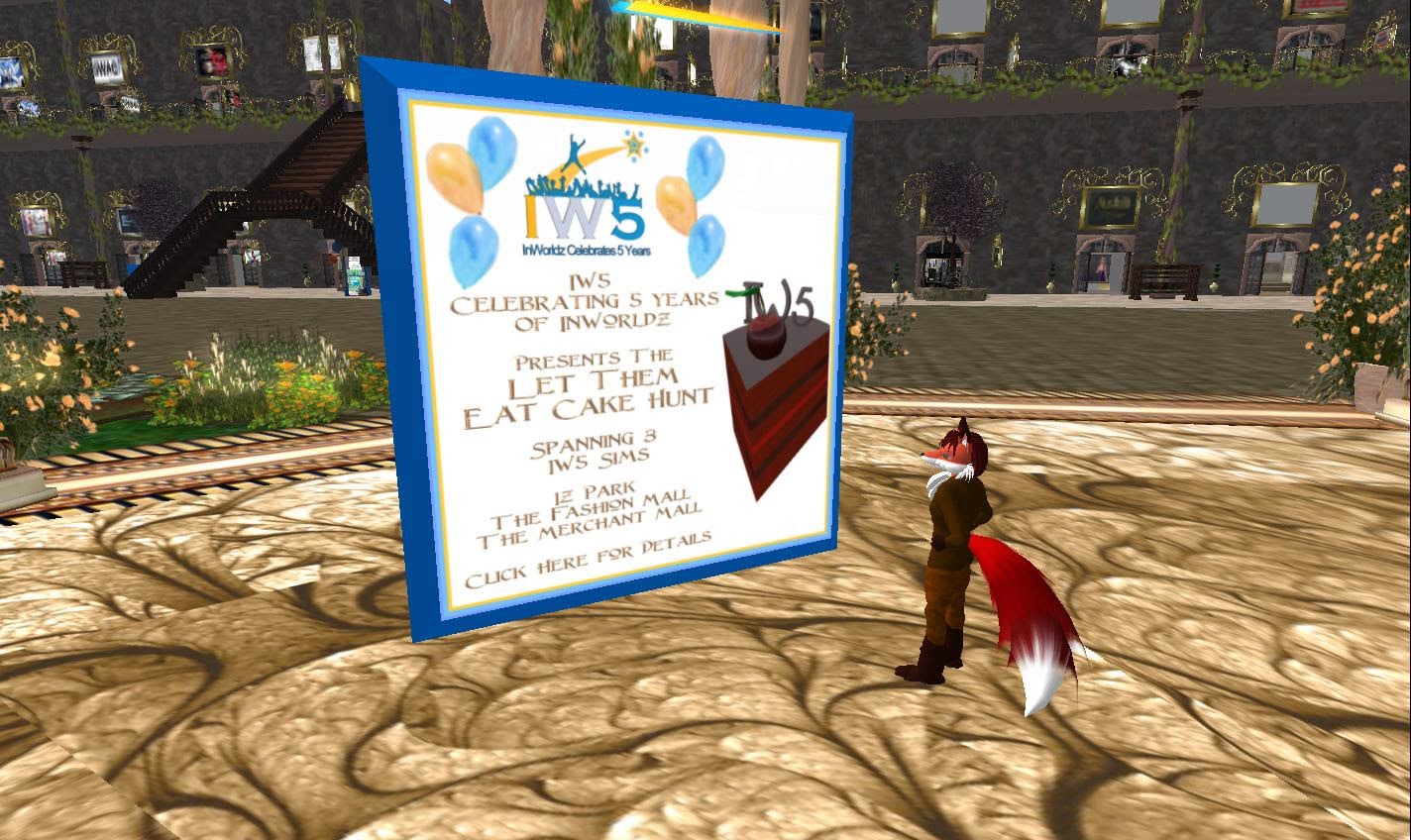 There was a shopping hunt for those wanting to search for quality freebies. 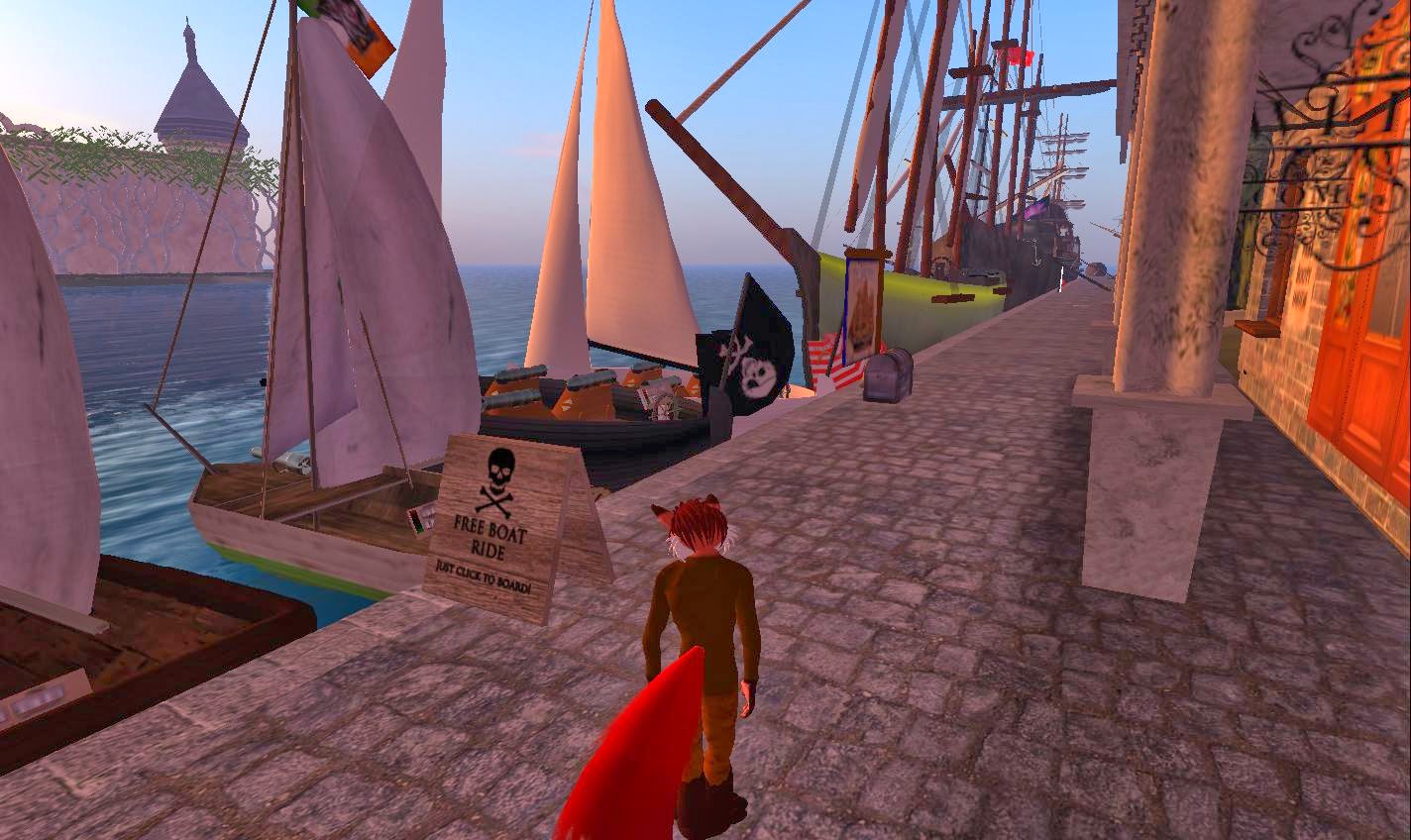 Several sims were all water for boating activities. And there were some dock areas, including this sailing ship area with one anyone could take for a ride. 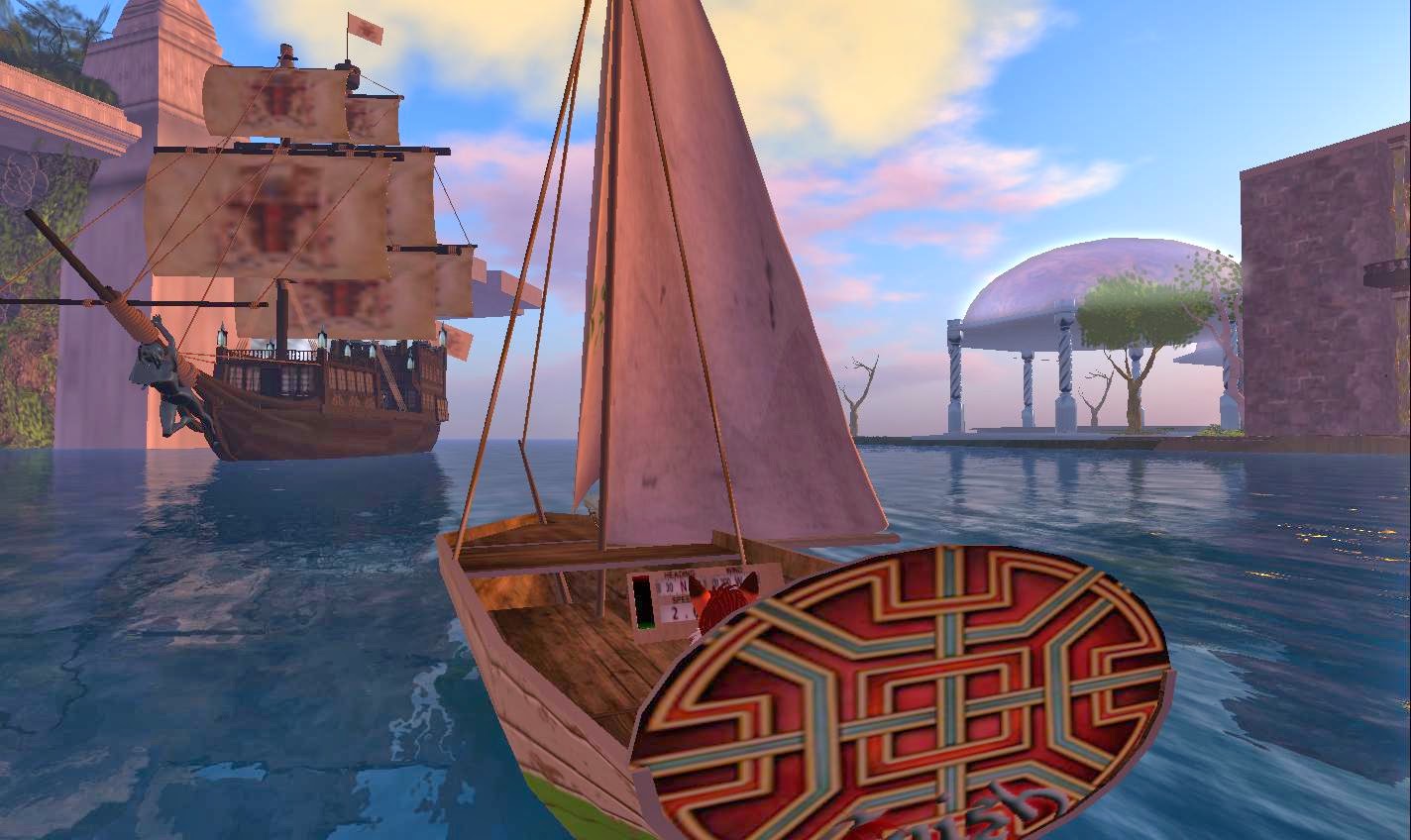 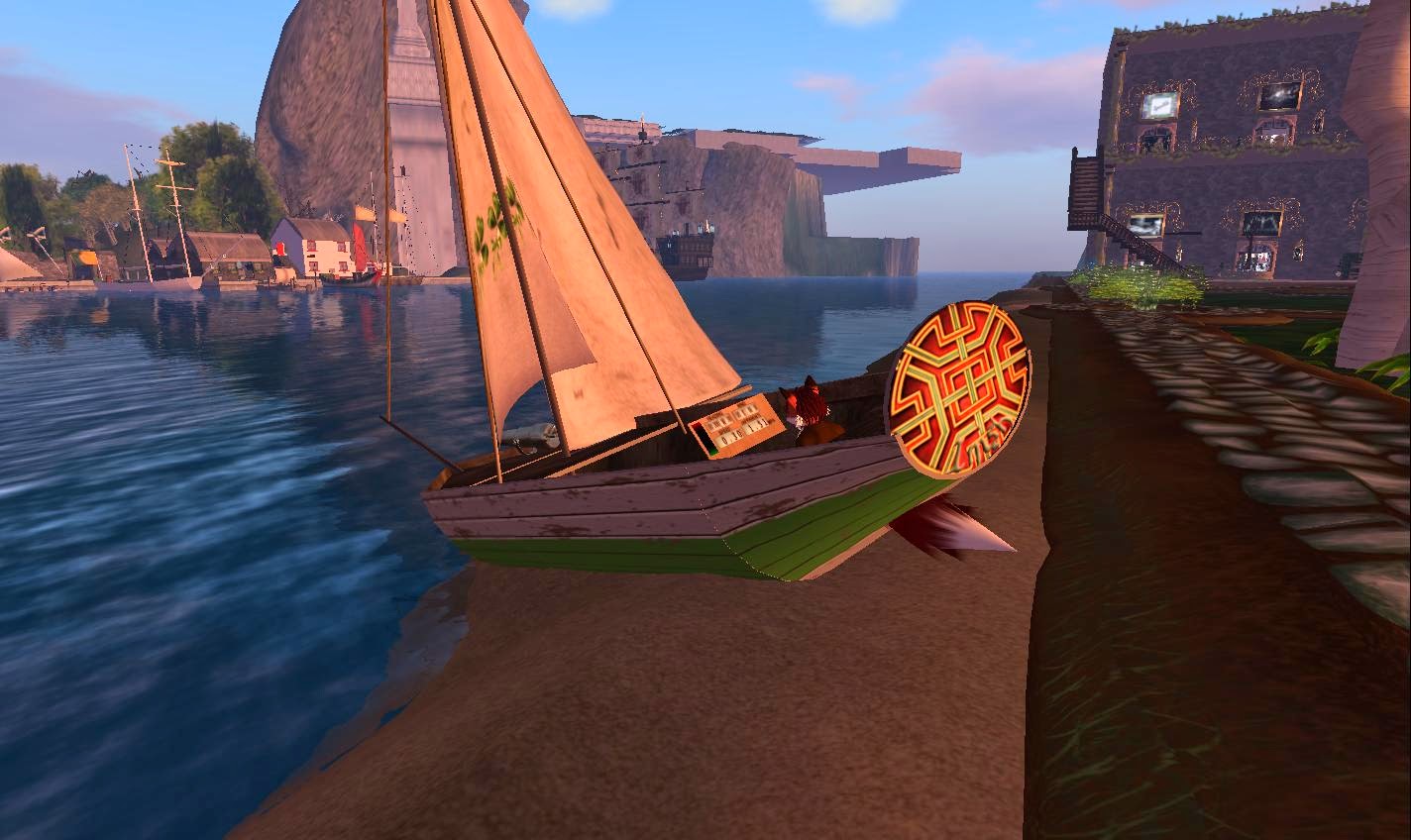 One had to take some care, otherwise you might end up beached. 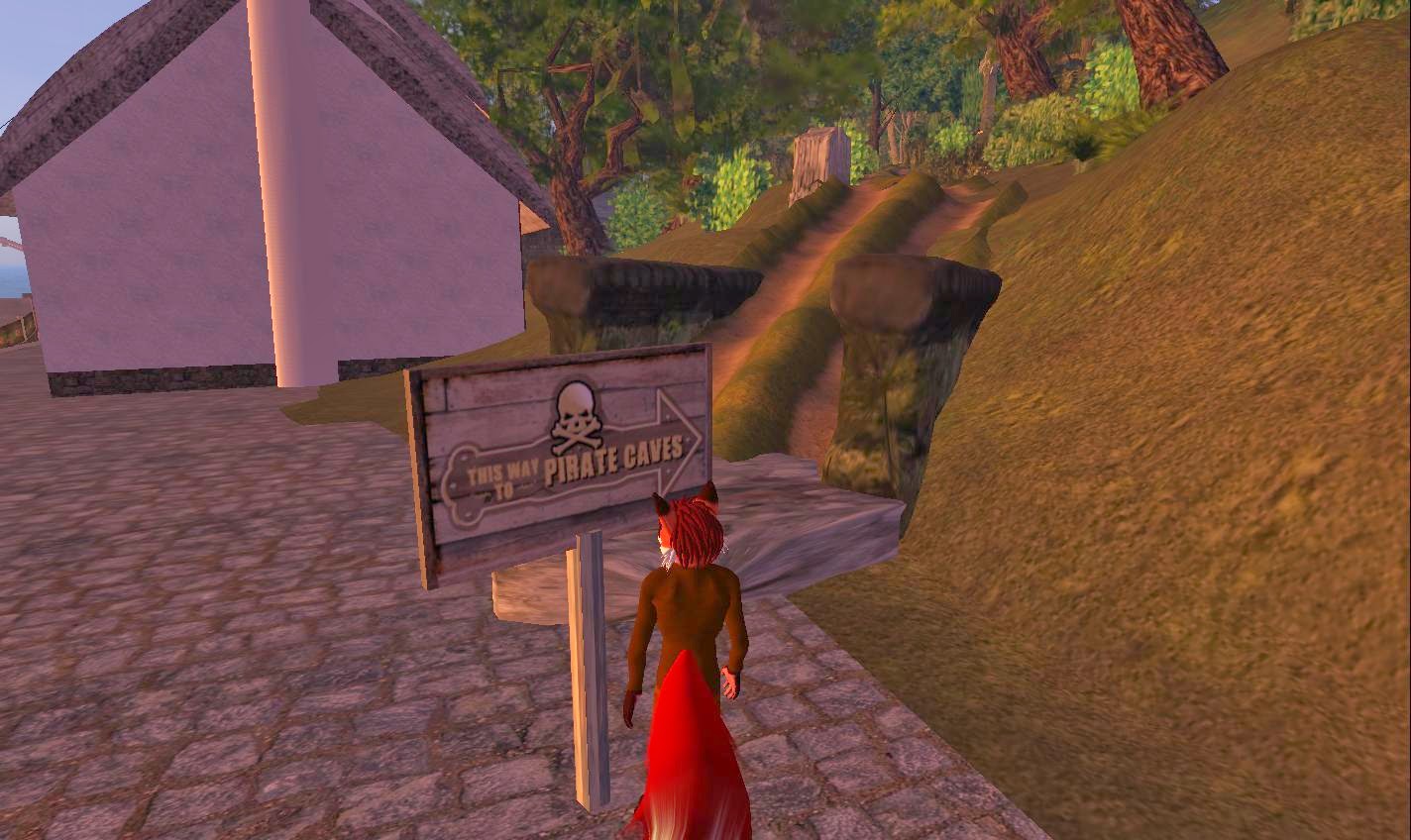 Not far from this dock were some pirate caves. 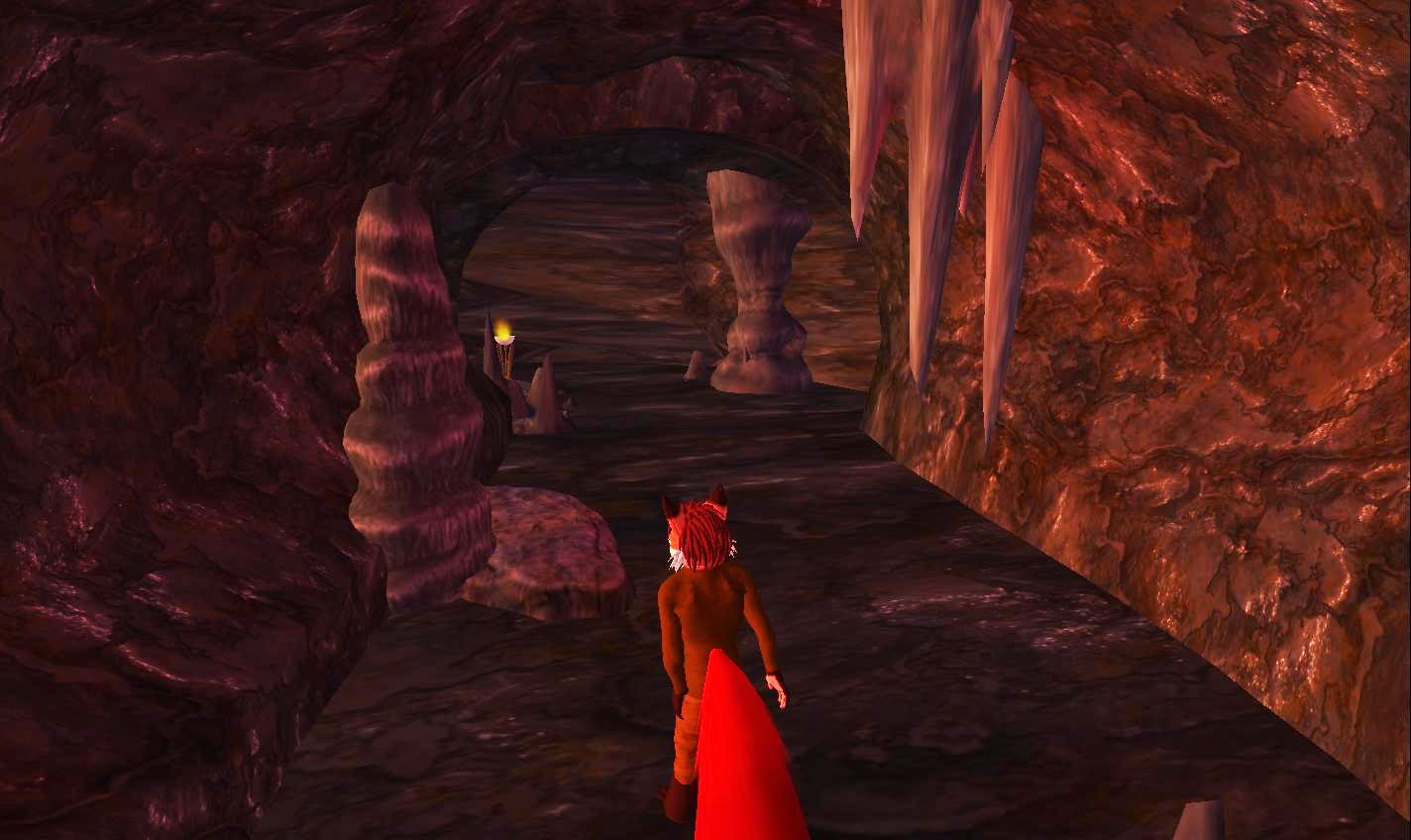 There were a number of caverns to explore. 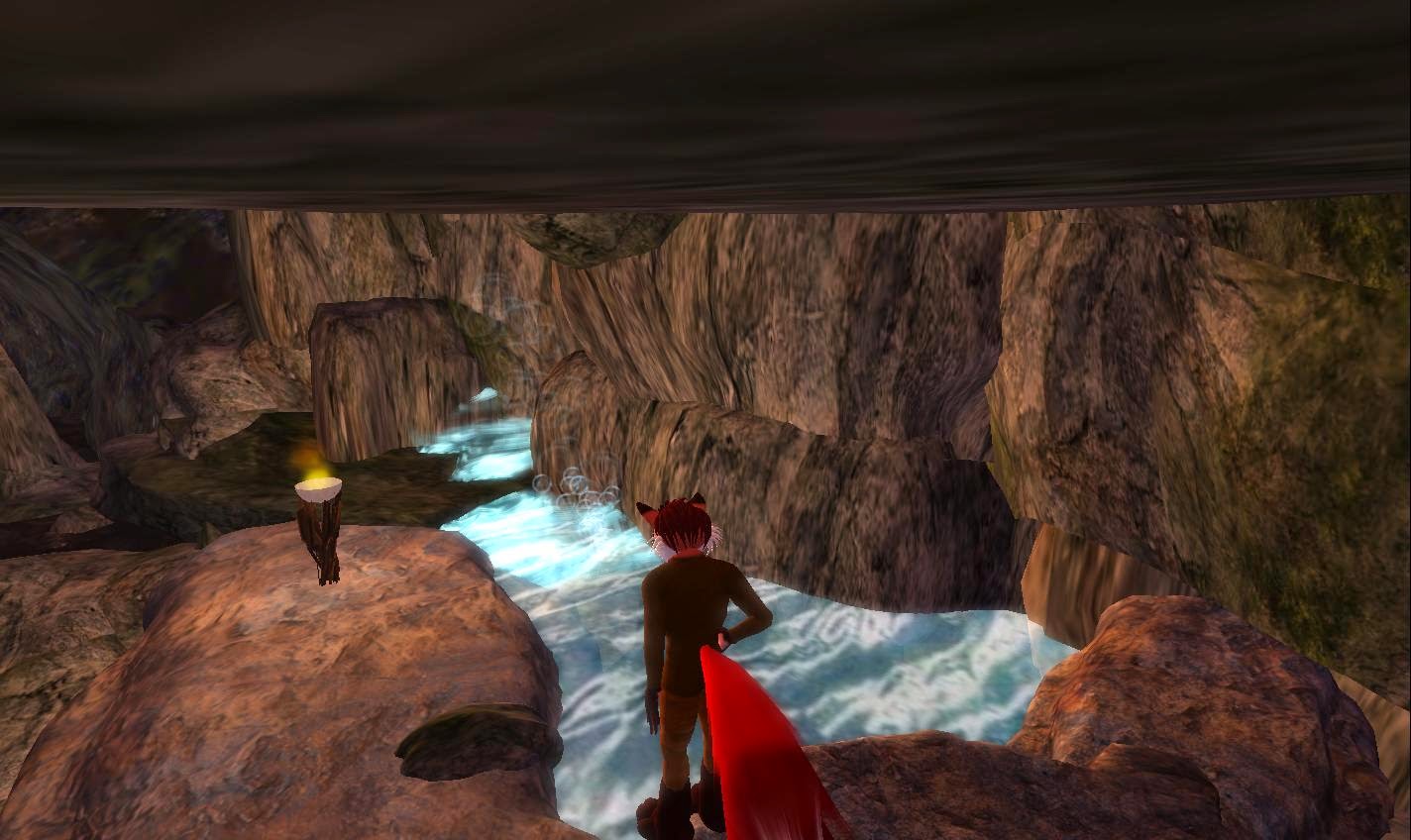 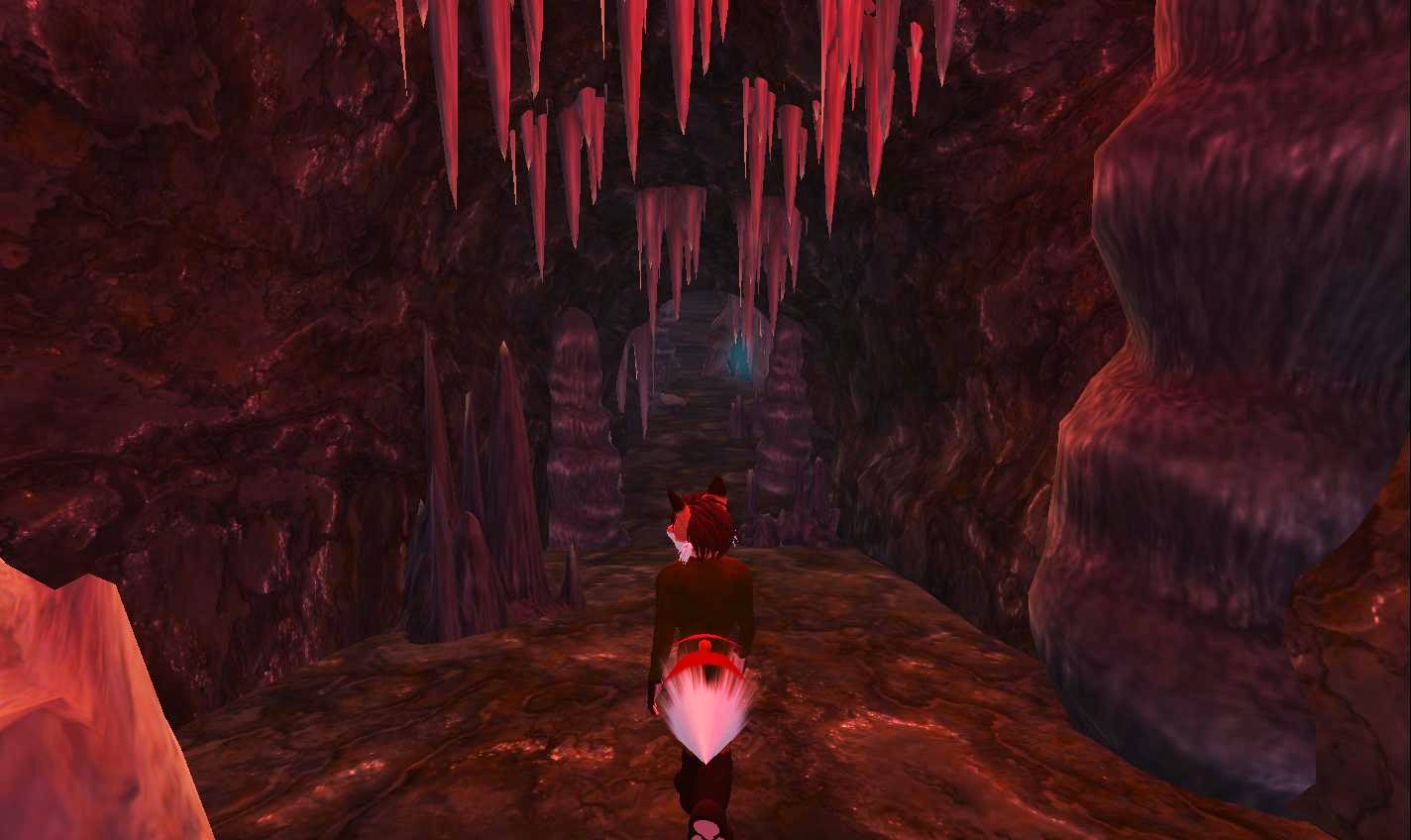 I think there was also a treasure hunt game, but I passed it by and moved on. 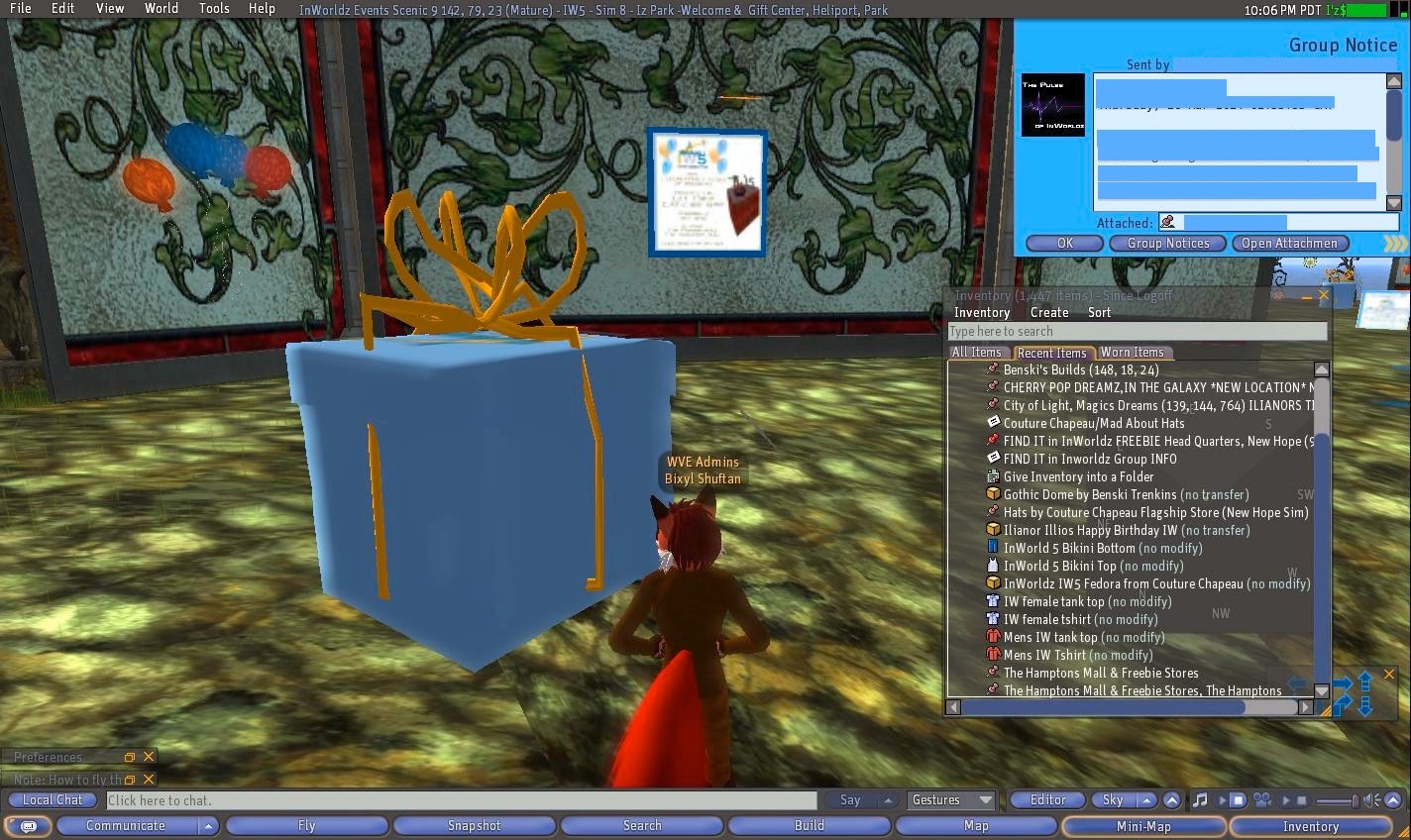 At the Welcome Center, there was a box with a few freebies. 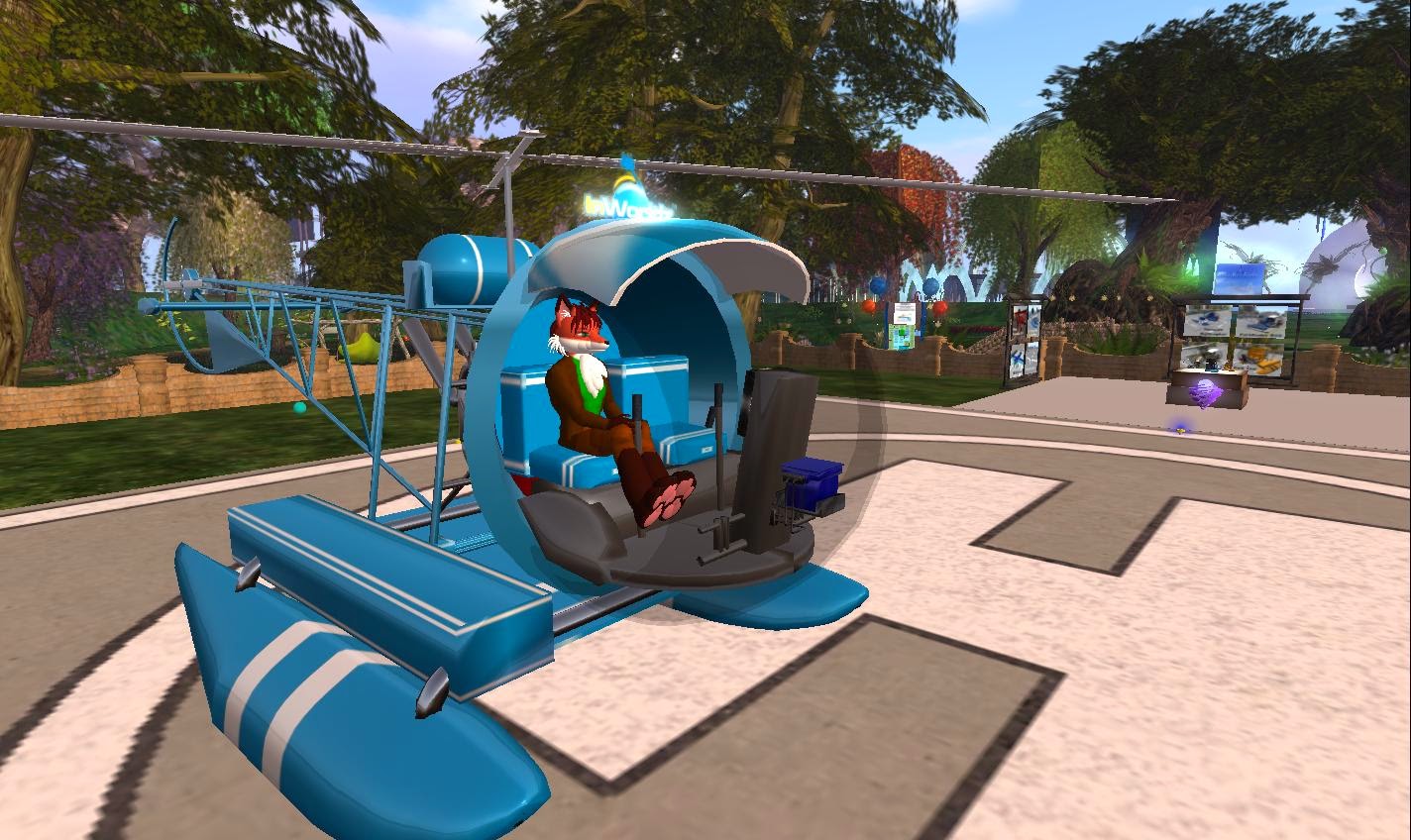 Nearby on a landing pad was a helicopter ride anyone could board and fly, with a notecard providing a few instructions. 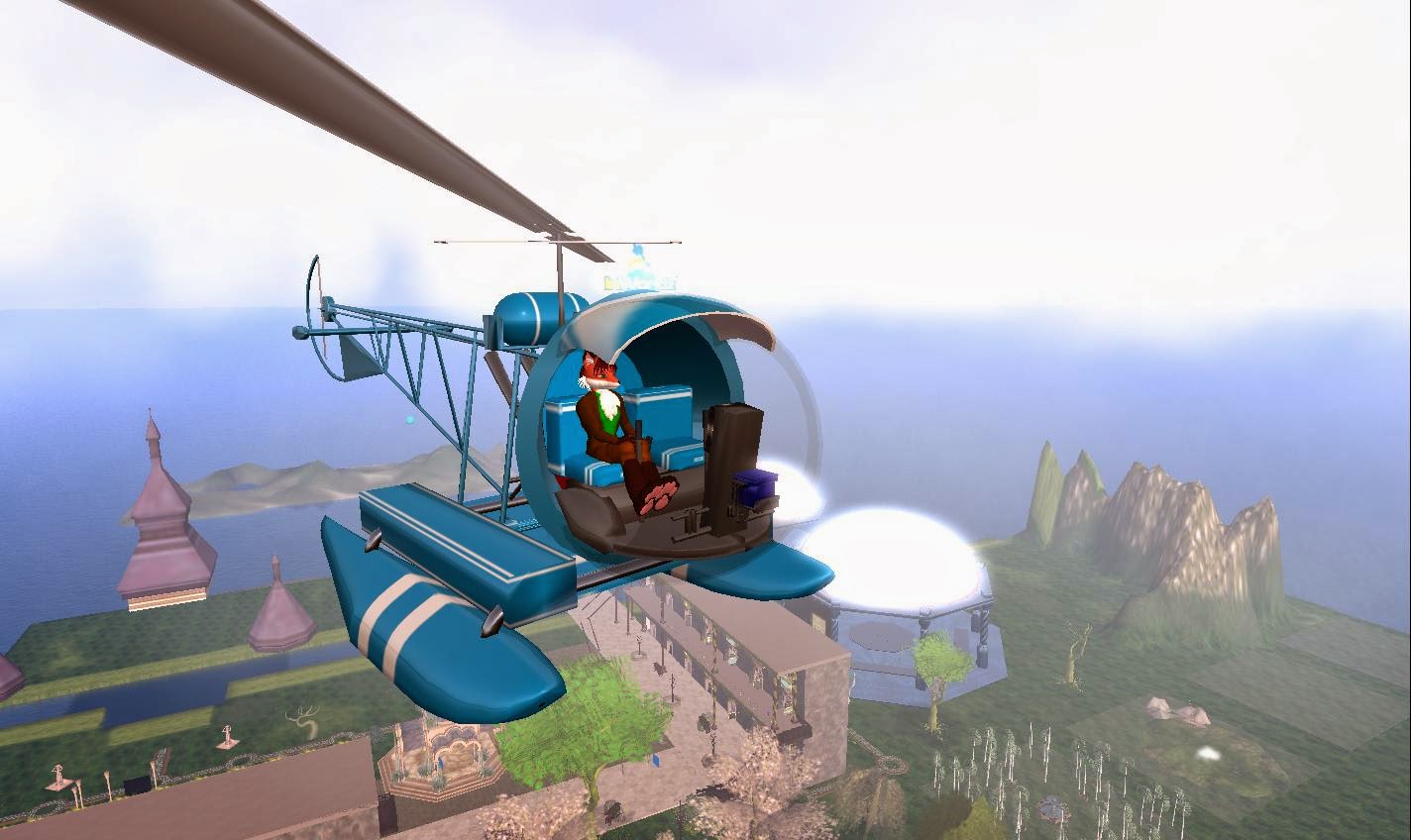 One couldn't just release the controls and let the chopper hover. After this shot was taken, the craft began to fall back to earth, with a few more keyboard presses stopping the descent. 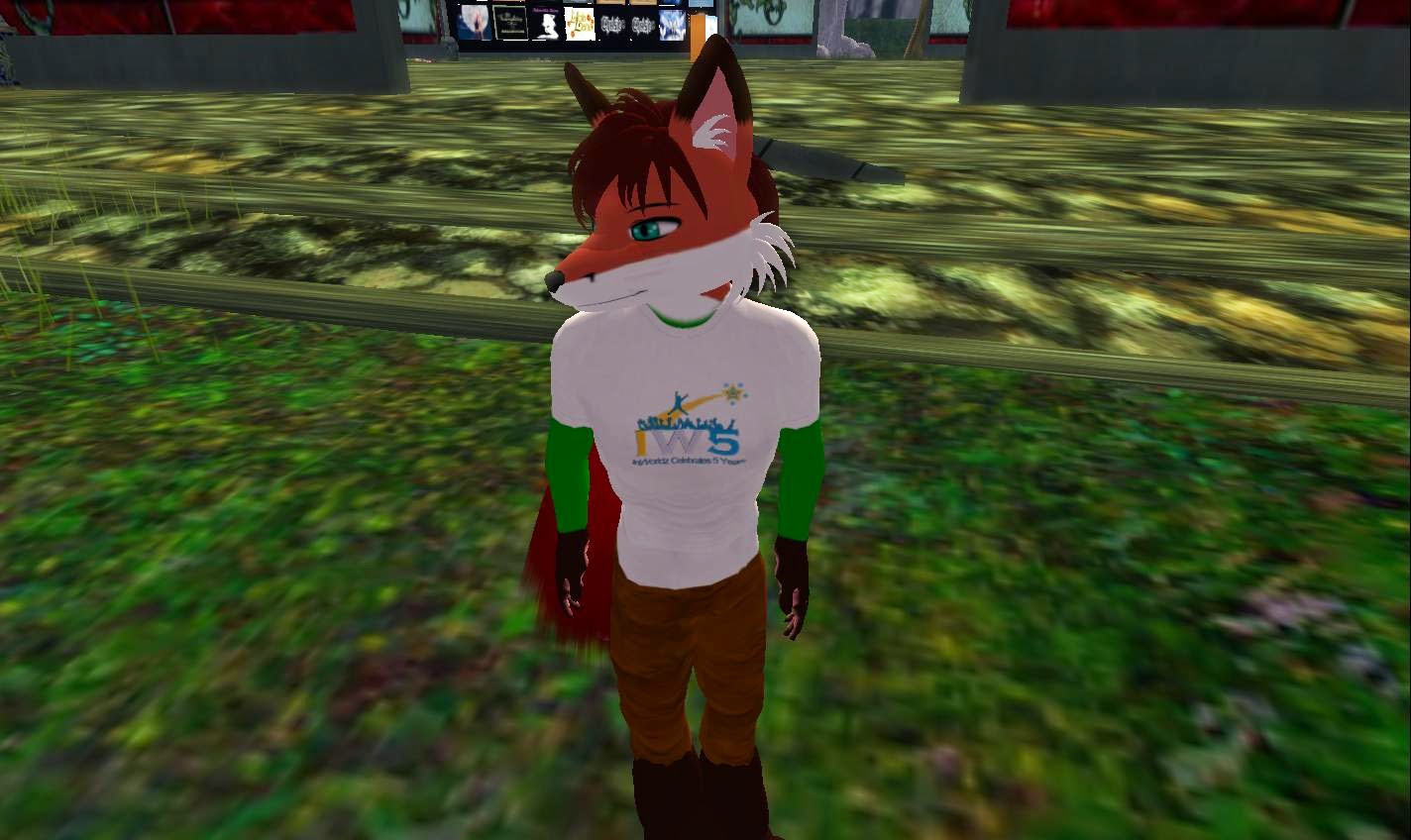 The official InWorldz Fifth Anniversary T-shirt, worn over my normal green one. 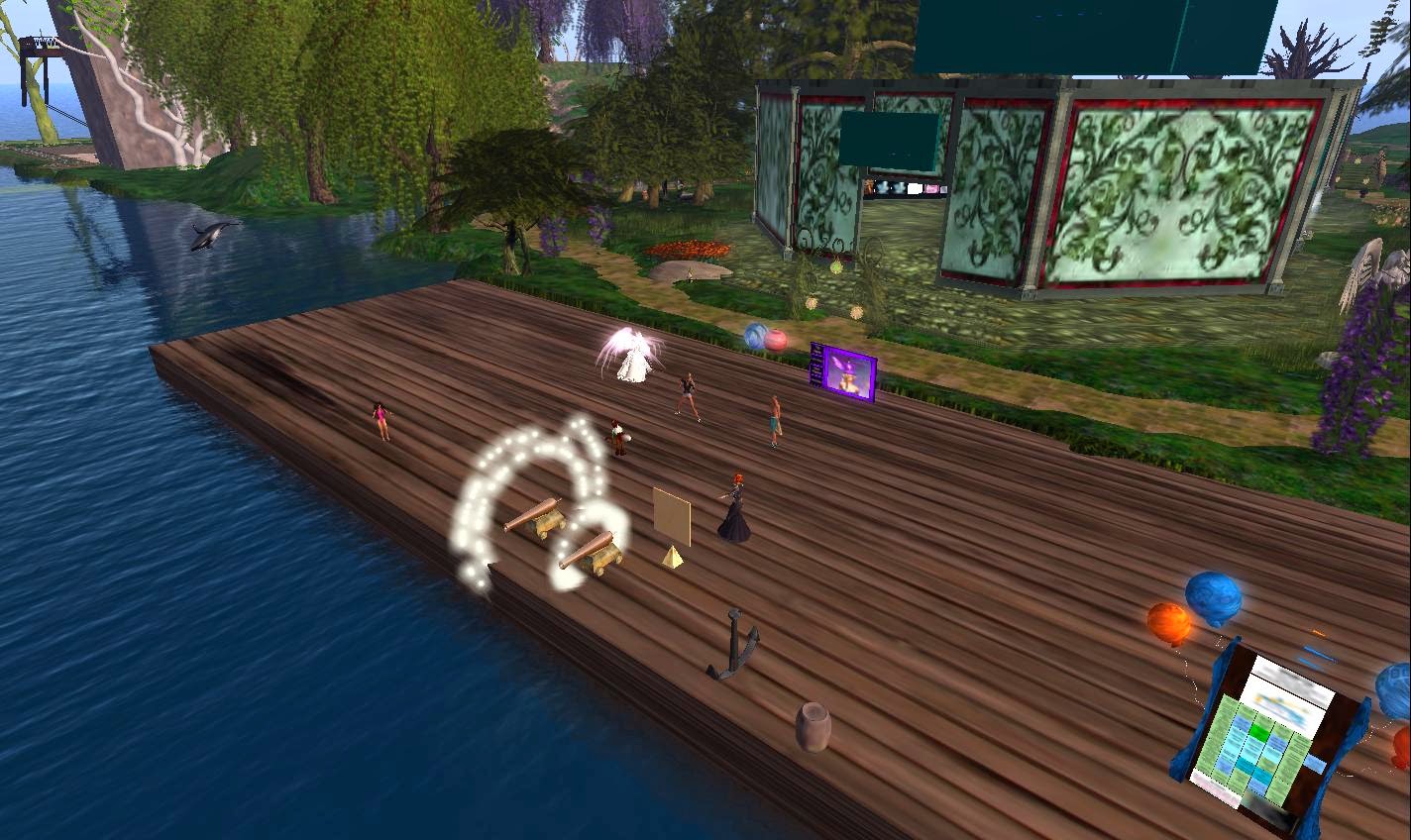 On March 23rd, I came across a small party not too far from the Welcome Center, with Cataplexia Numbers spinning some tunes for those there. With a nautical theme, she was playing songs like "Airship Pirates," and "The Ship." 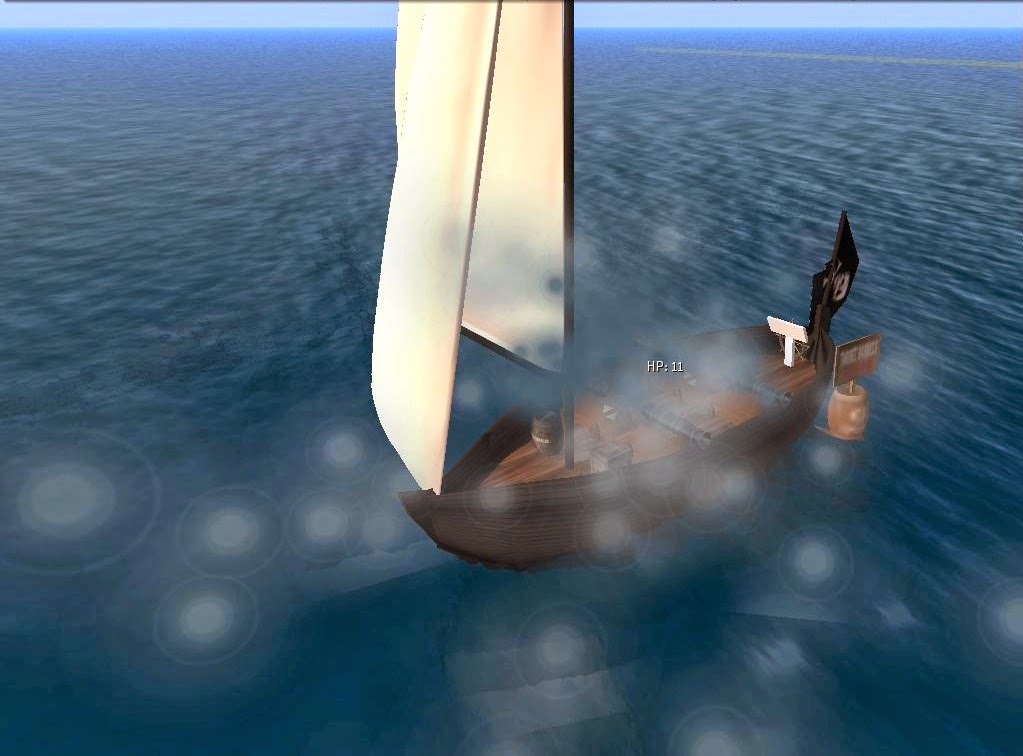 There was also a couple cannon and a boat rezzer, one that was damage-enabled. This was for a demo battle. When a boat's hitpoints reached zero, the thing went up into a cloud of smoke and sunk. "Let them know were over here having a ball blowing up ships!" one lady told me, "Hope you all don't try and blow up my pretty pink ship if I sail it. Heh heh!" 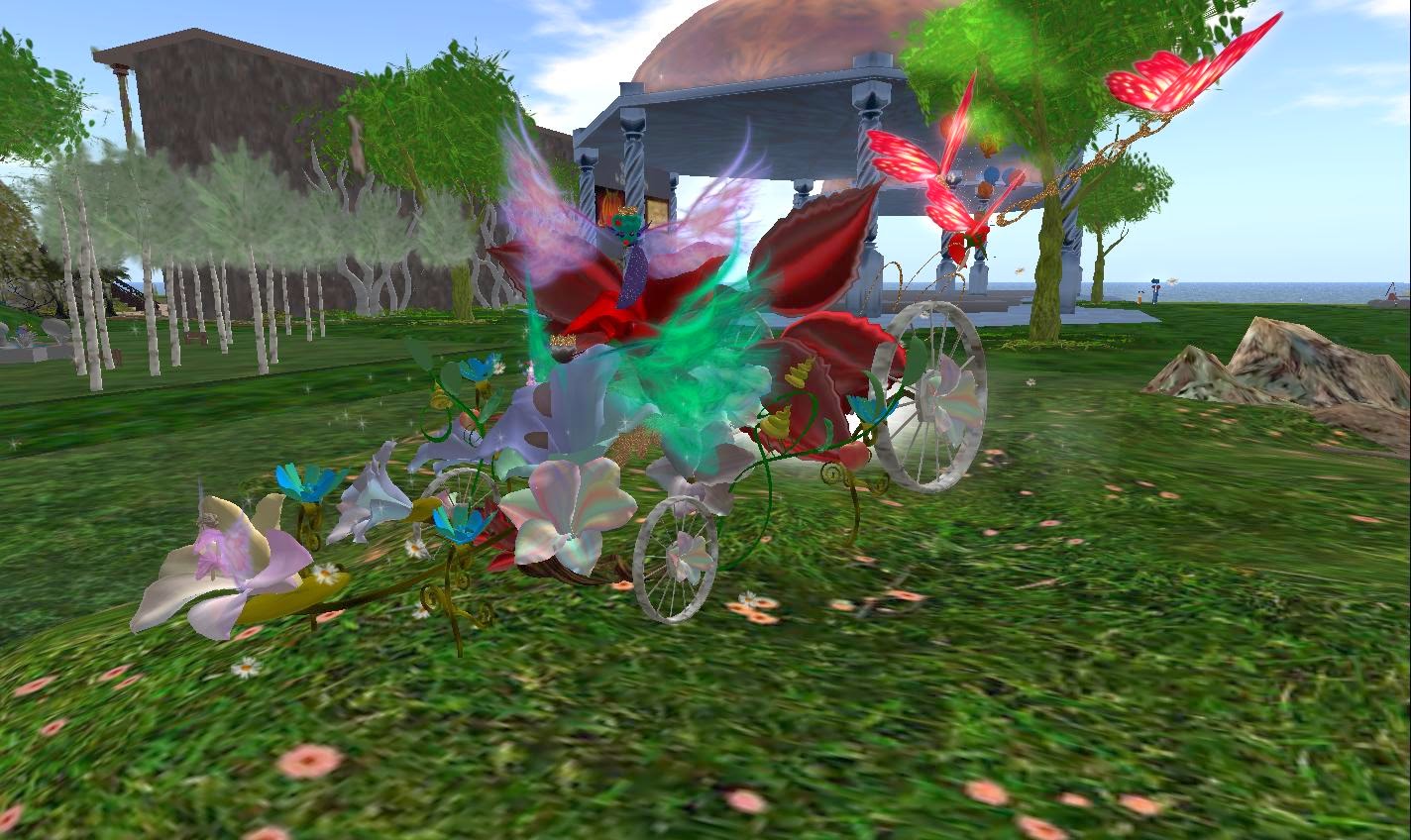 Among those there was Ilianor Illios, whom offered to show me her builds in the Fantasy area. She told me one had won the contest for best build there, "This is my work. It's a fairy wagon with the royal fairy family. I have added all techniques, tortured prims, sculpts, and mesh. ... In the contest, I liked all the builds. It has been a surprise to win." 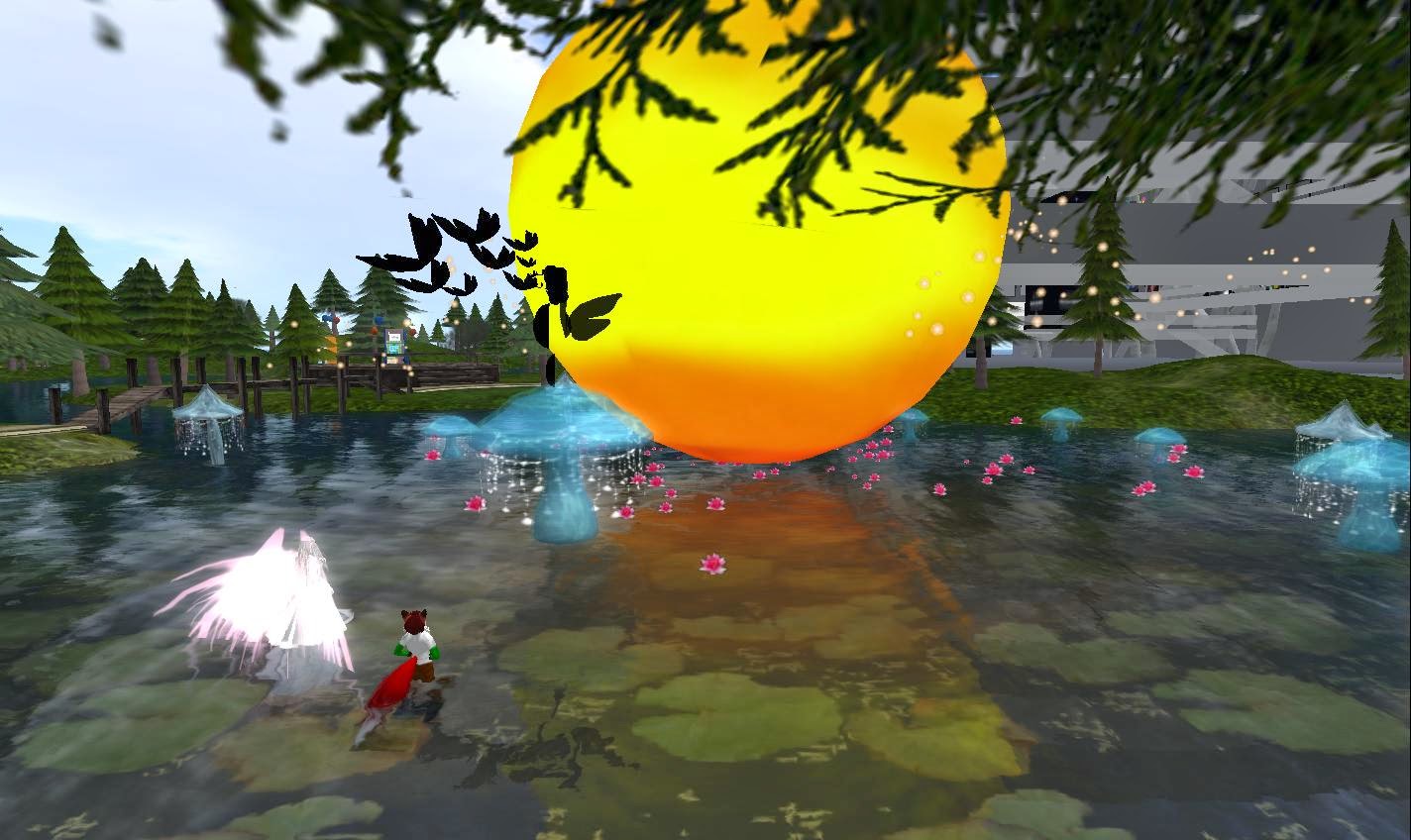 The build next to it wouldn't show up on my viewer, the official InWorldz viewer for the Mac (I was using my older computer to travel to InWorldz), but another Ilianor took me to did, "this sun is double faced, on the other side is sunset and here sunrise.

Ilianor told me she had made many builds for InWorldz. Besides her build for the contest, she also had others for the adult sim and the Gallery. From Italy in real life, she had come to InWorldz from Second Life as part of a mostly American virtual community which moved all at once in 2009, "When they came to InWorldz, I moved too." She had a different name in the larger virtual world. 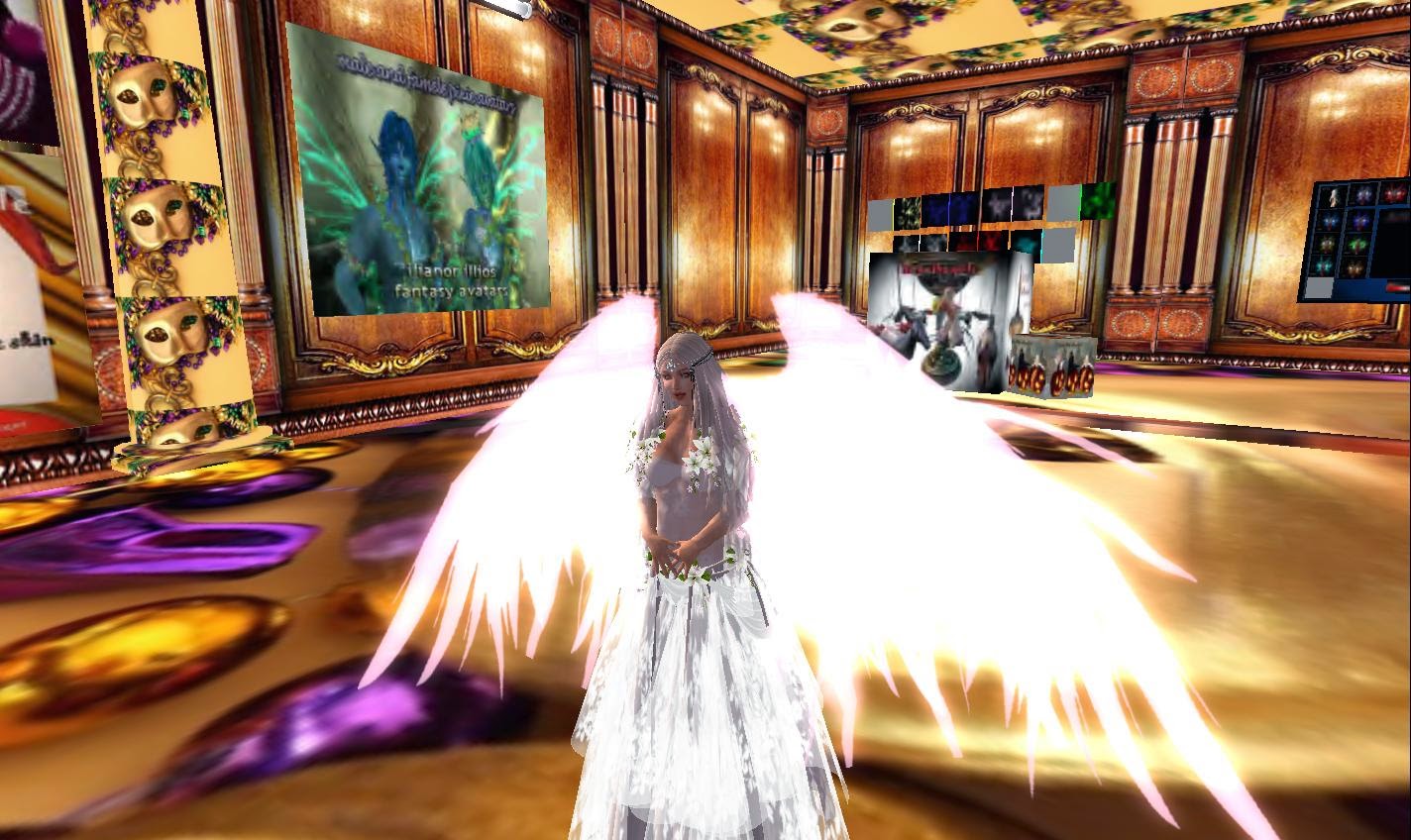 As it turns out, Ilianor is also a harp player. She will perform today March 31st in InWorldz from 1 to 2PM SL and IW time at "Gypsies of InWorldz."

The IW5 will be going on for a few more days, so there's still more to see. If you want to see more pictures, Daniel Voyager has a few more on his Flickr page: http://www.flickr.com/photos/danielvoyager/

Ilianor had more to show me, her store and her "City of Light." But that is another story.