Although my focus has been on Second Life, I've been hearing about a few developments in gaming. Some of my Second Life friends have been playing a new MMO game a lot, a new one in development caught the attention of a few, and there's been some developments in a few old favorites."World of Tanks" is going through it's yearly "Tankmas," with some goodies for it's players. For fun, this includes a tree and a snow tank players can decorate. They can get decorations by performing missions, and can level up their trees and snow tanks, getting a reward for doing so such as discounts on certain tanks or female crew members. There's also a new nation available: Sweden. 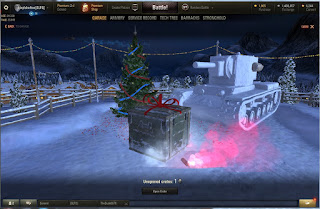 The Swedes were neutral in World War Two as neither Nazi Germany or Soviet Russia felt the risks of trying to conquer them were worth the rewards. The nation had it's own line of tanks, originally inspired by German designs but eventually finding it's own path in armor. Players have two lines of tech research: tank destroyers and a mix of light, medium, and heavy tanks. Rita mariner, one of the top tankers that I know of in Second Life, called the Swede tanks a mixed bag, some great, some okay, and some that she felt were just target practice for the opposition. But in addition to the Czech tanks that were introduced a few months ago, they do add to the variety of tanks (and spending more money for garage space).

War Thunder hasn't gotten quite as much attention among my Second Life friends as it's more difficult to team up, but I've still been hearing about developments. Some months ago, they introduced then expanded the list of, British Combat vehicles. This left Japan as the only nation in the game with airplanes only, but not for long. Japanese tanks are currently in development, currently available to those as part of the "testers team." An update in the mechanics in the game now allows for hydrolic suspension in certain vehicles. Also in development, naval combat. The first vessels won't be the destroyers, cruisers, and battleships of "World of Warships," but small craft such as PT boats. This means the game will eventually cover land, sea, and air.

With these developments, on December 21 the director of the game announced that "we have completed all the goals we set for ourselves in the early stages of development" and the open beta testing of the game was concluding after four years as the game was being officially released.

The road to release for War Thunder has been a fantastic journey, packed with development,  we have from the outset been active in development and content heavy in regular updates to the game. Our commitment to the game has provided players with millions of hours of passion filled gameplay and we have gained many, many players as well as the veterans who have been with us from the very beginning. To all our fans, we sincerely thank you, we are so grateful for the continued support of our project and look forward to your continued support into the release.

We will continue to develop the game we all know and love but you won’t be seeing the same major changes in direction we have all been part of throughout the testing, gameplay and core mechanics can now settle down and we can at last concentrate on giving the game the polish and content it deserves. Additions will continue, there are still many military vehicles that can be included, our mapmakers will still create wonderful vistas and beautiful scenery to wage war in, of course there are still exciting features yet to be added - such as World War mode, new nations, new tournaments and more.

It’s been a pleasure to provide you, our players, with such an already filled out  battle simulator and we look forward to even more happy times together as we continue to tread the path of the warrior. 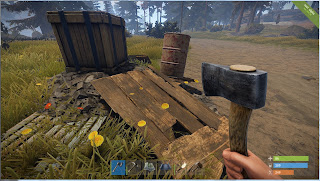 When we last looked at the survival game "Rust," they had just introduced their experience, or XP, system. But not only did a number of players complain about it, the development team soon came to the conclusion the system wrecked the feel of the game as an open sandbox with exploring and random encounters and turned it into a grinding slog. So they got rid of it and put in it's place a "component system."

Players are able to build all items from the start. But some things require additional items to make. So when you go around smashing barrels and opening crates, you'll find items such as road signs, pipes, used propane tanks, tarps, and sewing kits. The sewing kits are needed to make clothes beyond the basic burlap coverings, such as pants and t-shirts. For the shoddy armor made from road signs, naturally you'll need a few of the road signs. Pipes are one of the items needed for shotguns, and so on.

You can also recycle the metal and cloth items you find in the recyclers, that one can find in the warehouses across the island. Just put in the items and a little wood, and press the green button. Tarps are made into cloth, metal parts into low quality and high quality metal. It you throw in tools and clothes, you'll get back half the metal it takes to make it.

While you can still find lone barrels around the island, you can also find them, along with crates and food boxes, on new junkpiles, which appear around the landscape. You can also find oil-bearing barrels on them sometimes, which means you don't have to make long treks to the oil storage facility or airport or kill a critter to make a little fuel, or make a trip to and use an oil rig which in itself uses up fuel.

With players able to get metal and oil easier, I wondered what the catch was. As it turns out, an old nemesis from Rust's earlier days is around a lot more: radiation. It had appeared earlier, but was in a few small areas that could be easily avoided. This time, it's encountered more frequently. While the oil storage area is still rad-free, other places I've been in so far will start the Geiger-counter ticks. At least the water treatment plant was only half-contaminated. There are also small power stations around which while having oil drums around also have radiation hazards. This means the radiation pills you occasionally come across are going to come in handy to avoid poisoning, in addition to the radiation suits you'll occasionally find. The downside, they're not going to provide much protection against bullets and blows. Plus most players will prefer wearing something else. You're going to need to save space in your inventory for your clothes when switching to the suit. Which means your forrays into the ruins have gotten more complicated and less rewarding. On the plus side, in servers with more and hostile players, you may have less competition.

So what's new that's gotten the attention of my Second Life friends lately? Two games come to mind. One is Warframe, a first person sci-fi combat MMO game. In the game, the player takes the part of a "Teno," a warrior in a faceless biomechanical suit or "Warframe" whom has been reawoken after ages in hibernation to combat the Grineer, an army of clone soldiers trying to take over the Solar System. Players have a choice of what kind of fighter to be, as well as a choice of ranged and melee weapons. Beyond the turorial mission, from what I have heard missions are all multiplayer with no solo fighting, with some story and plot involved as one goes on. 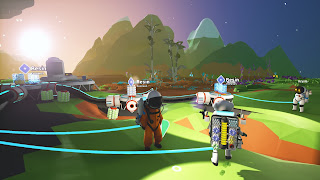 I personally haven't had much experience with the game as I found it difficult to "get," and before I could meet up with Skylark Lefavre and Pagan Sunburn whom are fans of the game, the game fouled up while updating. My friends have had similar trouble, to the point of occasionally calling the game "Glitchframe." So unless someone does a reader submission, there may not be much more to say about Warframe.

Another game that's gotten attention of my friends is "Astroneer." This game, still in Alpha, is in it's very early stages. Players take the part of an astronaut stranded on an alien planet trying to build a base, trying not to run out of oxygen. The game is somewhat similar to "Space Engineers," but is more cartoony, simpler, and no PvP option so far. Players can get together to work on a single base. Thankfully, some needed materials are slowly renewable, but things are complicated by occasional sandstorms.

"Astroneer" is very new, so if you get it, expect some changes as the game goes on. The game is currently available on Steam.

That's all for now in gaming.