A Look at VR Chat 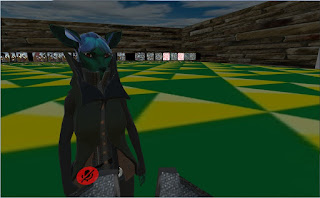 Several months ago, Linden Lab announced the release of it's "next generation virtual world" Sansar. Anticipated for two years, the reaction from most Second Life residents, who were presumably the far majority who explored it, was that it needed plenty of improvement and left it behind. There are other virtual worlds out there, such as InWorldz and High Fidelity. But these two have been around for some years and have yet to attract anywhere near the attention the largest virtual world has received. But are there any other new ones out there besides Linden Lab's new creation? The answer to that is yes. One other recent one is VR Chat. 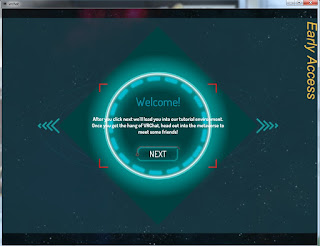 VR Chat was created by Graham Gaylor and Jesse Joudrey, and was released via the Steam distribution service on Feb 1, 2017. But it's been in recent weeks the virtual world has taken off, an article in PC Games News in mid-January saying the client software had been downloaded over a million times in two weeks to 1.7 million. The reason for the attention the game has received is due to players broadcasting experiences over Youtube and Twitch. This includes recordings of the "Ugandan Knuckles" meme (some profanity in videos in link) that caught on to the point players found themselves followed by bands of badly-made avatars of the red "Sonic" character asking in African accents if they know "de wey." While the meme is considered lame by many (including yours truly), the publicity has gotten VR Chat the kind of publicity that has escaped most other virtual worlds other than Second Life.

To download VR Chat, head to it's page on Steam. The software is free. Clicking it on, you'll need to register an account. After your email address is added, and you agree to the terms of service, you should be ready to go in. Your first place will be a tutorial area to help you learn how to get about. For me, the most challenging part was just getting started, not being able to move from where I appeared. Then I realized that unlike Second Life, the movement keys are not the arrow buttons on the keyboard, but the WASD ones. You move your mouse to look around. 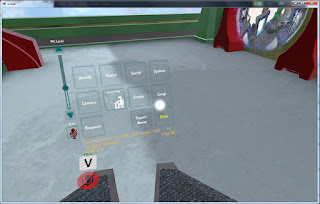 Another important button is the "Esc" key, which brings up a menu with 11 buttons and a sliding bar. You can adjust the bar for how loud you want to sound to others when you're speaking on your microphone. The two buttons I was using the most were "Worlds" which brings up lists of places you can travel to, and "Avatar" which allows you to change your appearance from a selection. Most of the choices in the Avatar section were varieties of normal human or robots, with a few others such as an elf, an orc, and what looked like a greenish anthro deer. 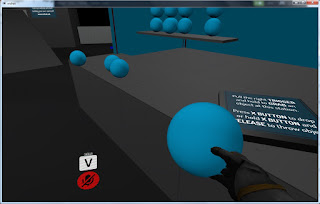 Unlike Sansar, you can actually grasp things. Just get your hand close enough, and press the left mouse button. You can hold an object for a while, and even hold and fire a pistol. I found throwing balls to be tricky, though. The only way I could throw something with some reliability was to swing the mouse upward and then let go, and the object would go some distance in the air. Different objects seem to have different weights as one "frisbee" would keep going up while a solid block only went up a few feet before falling back. You can also grab a pen and draw something. Unlike Second Life, you can't really add objects to your avatar indefinitely. If you want to hold anything else, you'll have to drop what you're holding. 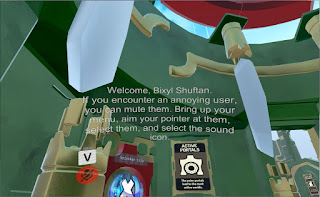 After the tutorial area, your next location, and the one you'll appear when logging on the game is "The Hub." The place is divided into several areas. At "Featured Worlds," there are portals to several places. "New Worlds" has a few more of recently made locations. The "Help Area" has a number of signs with hints on getting about. The "Social Sculpture" is basically a blue square with several blocks which anyone can try to make something. There's also an avatar area with hints on how to change yours and a mirror to show you what you look like. 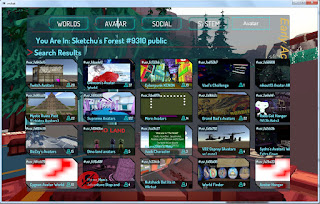 To travel to another place, you can use a portal if where you're already at has one to where you want to go. Otherwise, press the "Esc" key and select "Worlds" on the menu. You'll see several lists, which you can move about on using the arrow buttons. Once you select a world, you have the option of teleporting over, or you can create a temporary portal that those nearby such as friends can follow you over. Places can sometimes be small, such as a "Sword Art Online" one that turned out to be just a single room. 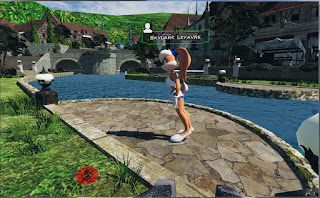 But most VR Chat worlds I saw were much bigger. One was a representation of Times Square, filled with parody ads and ads for locations. There was also a place that looked like an European village. Another place was made of floating islands in the sky. I also saw some gaming areas. One was a "Wild West" game between outlaws and sheriffs in which the latter would try to stop the former from taking the gold bars in various places back to their hideout with both shooting at one another. There was also a space-themed capture-the-flag. I also saw two maze games, one with simple walls, the other an underground cavern passages maze. There was also a small island done in the style of "Minecraft." I saw a listing to, but never visited, a "My Little Pony" area. 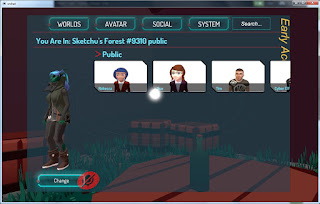 But the most common types of locations I saw advertised themselves as places to get avatars. Despite the "Ugandan Knuckles" fad, I never saw any of the deformed red Sonic avatars. In the several places I looked, amine girl and various cartoon avatars seem the most popular. But these aren't the only ones. A friend was able to appear in a "Windows 95" avatar. One time in "The Hub," I saw a guy that looked like a fish in a TV screen. To chose a look in one of the avatar places, click on it. But the look is temporary. After you log off, you'll go back to your old look. So if you want something other than the starting avatars, you will have to go back to the place after logging in.

Both worlds and avatars take programs outside VR Chat to make. Unity SDK can be used to create avatars and worlds. Avatars can also be created with Maya and Blender. Created worlds are private, limited to the creator and any friends he wishes to bring in, until the creator contacts VR Chat's team and requests that it be made open to all. 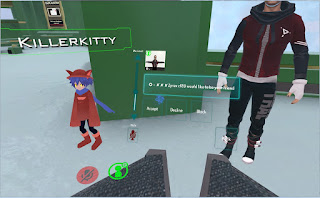 So far, meeting people there has been much like meeting people in a Second Life welcome area. Only instead of chat, it's all voice as there is currently no chat function. If you have a working microphone, press and hold "V" to talk. Besides a couple friends from Second Life whom helped show me around, different people reacted in different ways. One was helpful. One just wanted to curse at everyone else he saw. Most just went about their business or chatted with someone willing to talk. So far the only one who pulled that "Show me da wey," line was in a mummy avatar, not the deformed Sonic character. But you won't always run into someone, particularly during late night and early morning SL time. 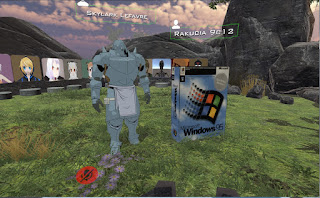 Like Sansar, VR Chat is new, having been around only for a year. It's not as versatile as Second Life. And there's no economy, no trading or virtual currency. On the other hand, it's my personal observation it's more lively than Sansar. I remember reading that someone else who was both in Sansar and VR Chat stated Sansar felt more "managed." Hamlet Au (Wagner Au) was quoted in Motherboard as saying the focus Sansar had for high-quality images wasn't necessarily what was wanted, "Many also seem to be putting the cart before the horse. Carefully laying down an economic infrastructure when there’s hardly anyone there to use the economy. ... Most gamers don’t care about all that. They just want to jump in immediately, start playing around with the system, cause and enjoy chaos, and have fun with each other.”

Although VR Chat got plenty of attention due to a silly meme, it also made news when something serious happened. In one crowded room in which someone was recording, one player was witnessed having a seizure. Most stood around, not sure what to do, with one person telling others to back away to give the person room to recover and asking no flashing lights be used, and with one or two people clowning around like they didn't notice what was going on. Eventually the person recovered and logged off. 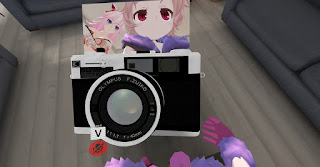 Personally, VR Chat seems to be better than Sansar, but it's no Second Life. It lacks the versatility of the more established virtual world. Right now, thanks to youtubers and a meme, it's riding a wave of popularity that has enabled to give it numbers that Sansar and others like High Fidelity wish for. But will the people stay once the novelty wears off? Second Life gained a community of dedicated users that stuck around once the media all but stopped talking about it. How VR Chat develops over time will help determine wether not people stay. Perhaps some of those there who start to tire of the memes but still have a taste for virtual worlds will head to the one that still has a sizeable following after almost fifteen years.