Four and a half years ago, the future of the InWorldz virtual looked bright. It was growing in terms of both active users and regions, notably a number of residents of Second Life whom were taking an increasing interest in this other grid which while the largest of the OpenSim worlds had remained a distant second place compared to the larger and more established virtual world. Today, InWorldz is facing the end. A statement made by it's owner Beth Reischl stated due to financial troubles, the virtual world's servers would be going down Friday July 27. 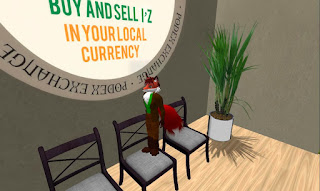 So what happened? While the relationship between Linden Lab and it's customers, the residents of Second Life, has always been a little problematic, about four and a half years ago it was worse. This was the "Rod Linden" period in which aside from responding to problems, the Lindens didn't talk much to the residents aside from the occasional statement. They made a number of clumsy moves, such as the 2013 Third-Party Currency Exchanger Ban that was lifted only when there were entire communities talking about leaving Second Life for other places. A few months later was the Content Creator Terms of Service controversy in which a poorly-written change to the Terms of Service in regards to the rights of content creators that with a public already wary of Linden Lab's moves, the result was some seeing the Lab as preparing to sell the content of it's users as it's own, possibly as part of an "exit strategy" of either closing down Second Life or transforming it into a much more tightly controlled place. It's hard to saw how many believed this, but the way Linden Lab had been acting, even those less prone to panic were thinking it could happen. 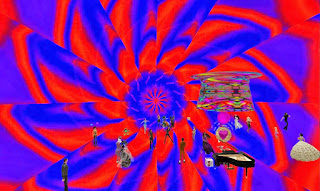 And so many residents of Second Life began taking a more serious look at the second-largest virtual world around: InWorldz. Tuna Oddfellow closed down his one of a kind performance in the more established virtual world and reopened it in the second-largest. I soon found the free Wingless avatars on InWorldz, then Luskwood was offering to give SL residents on IW a copy of the avatar they purchased on the larger virtual world. The Podex third-party currency exchanger set up shop in InWorldz. While there was already a Relay for Life in InWorldz, it became much larger, an InWorldz-Second Life Connection Center to aid SL residents new to the smaller grid sprang up, there was a meeting to discuss questions about InWorldz in Second Life, and more. 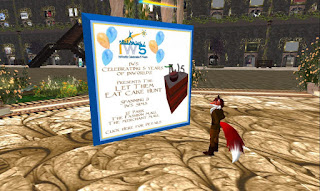 With all the attention on InWorldz, it was time for the Newser to make a small change. Where we once stuck such articles in "Extra," we created a new section, "Other Grids, MMOs, and Games." We would interview the founder of InWorldz. And then there were my virtual neighbors in the Sunweaver/Angel community. Nydia took an interest in the Connection Center, and when it's founder suddenly up and closed it she helped create a new one. The Sunweavers/Angels would also get a couple sims as a "life boat" for our community just in case Linden Lab really did shut down Second Life, still spending most of our time in the established virtual world, but getting to know the new one a little. With all this attention, InWorldz soon reached a total of 100,000 accounts, and it's fifth anniversary party was a happy occasion, that of a small but growing virtual world on the rise.

It's a good question of how things would have turned out for InWorldz had Linden Lab persisted in it's 2013 third-party currency exchanger ban, and if it's blunders in 2015 such as the closing of the SS Galaxy and the near-shutdown of the Grendel's Children mall had happened a year earlier. But even as the smaller virtual world was celebrating the promise of a brighter future, things were already turning around at Linden Lab. In January 2014, Rod Humble stepped down as CEO, and in February Ebbe Altberg took his place. Linden Lab under Altberg became more talkative to people, and among the first things he announced was that the controversial changes in the Terms of Service in regards to content creators would be undone. And in July they were changed to the satisfaction of most.

With the reasons InWorldz was getting more attention now relaxed, residents in Second Life became less inclined to hop over. The Relay for Life would continue to hold events there. But overall attention fell. With Linden Lab announcing the development of their next-generation virtual world Sansar, perhaps attention that would have otherwise been paid to InWorldz by residents of Second Life was focusing there. The Newser itself would continue to pay a little attention to InWorldz, but not as much. The numbers of active users would go up and down some, then in Spring 2015 start a decline that would continue. The number of sims would spike in mid-2015, then start to decline. The decline in sim numbers was slower than the numbers of active users, though. Then InWorldz found itself facing competition not just from Second Life, but another OpenSim world. Kitely grew rapidly in just a few years to become about half InWorldz size in the number of registered users. By 2015, the two grids were about equal, and in 2017 Kitely had become the largest of the OpenSim grids. Another grid, Avination, which was a competitor for the largest OpenSpace world in their early days, was the target of theft by criminals, and then hit by a "catastrophic" data failure that led to it going under in 2017. 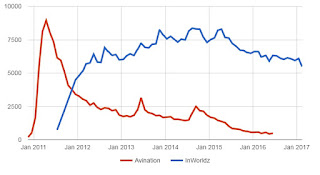 InWorldz itself began making some moves that raised more than a few questions. This had begun early on when in August 2013 their General Discussion forums were closed, citing an increased activity of trolling and hateful posts that was taking time and effort to moderate them away from their activities in keeping up the grid. In April 2017, they announced they would no longer publish their statistics of how many regions or active users they had. And to a number, this was a signal the grid was in decline, and the owner wasn't sure how to stop it other than hide it. Reischl was distancing InWorldz from other OpenSim worlds, insisting it wasn't really one, "InWorldz has moved on from Opensim a long time ago," and seemed to be saying she was no longer publicizing the statistics because of an "us vs them" attitude there.

In January, Hypergrid Business published an article saying merchants in InWorldz were becoming concerned about the grid's future. "...we have seen a drastic decline in sales and residents," one merchant told Hypergrid, requesting anonymity saying he was concerned about possibly being banned. An "InWorldz Chamber of Commerce" had been set up in fall 2016 "To help promote in-world commercial activity, and to collectively advocate on behalf of their interests." But their director expressed disapointment in her meetings with Reischl, Hypergrid reporting, "She said it was not her job to keep merchants or residents in InWorldz." The article also stated, "Residents have also complained on social media that the founders haven’t been paying attention to their concerns. Of the top managers, owner Reischl moved to Panama and founder and CTO David Daeschler has mostly moved on to other projects." Another resident commented that early on, "one of the best things about IW was the fact that it was so easy to talk to the founders on the forum and they actually listened to us and gave us feedback it made IW feel like a community." But now it was looking more and more like how she saw Second Life at the time she joined InWorldz.

As of the writing of this article, Reischl has launched a Gofundme that was initially stated as having the goal of trying to save InWorldz. But then after most of the money needed to reach the goal was reached, the objective changed from trying to save the grid to packing up to move to another grid. The result has been confusion and some anger, and eventually comments on the Gofundme disabled. And then donations were no longer being accepted. One complication of getting the facts about the situation is that one major source of news about InWorldz, Hypergrid Business, is not particularly liked by the virtual world's owner, "InWorldz has repeatedly complained about unfavorable coverage"

Either way, things look poor for the future of InWorldz. If the grid is saved with the intention of keeping it up, the near-shutdown will make it a challenge to do so. If instead the place is closed with it's staff forming a new Grid, they will essentially be starting all over again, along with anyone who goes with them. Not everyone wants to start all over again, even if they could take most of their things with them. One recalls the virtual world "There" which reopened a couple years after it closed, but has been a tiny shadow of it's former self. Also, not all of the content creators are happy with the idea of their goods being moved to another grid without their consent, so there is the possibility of legal action. 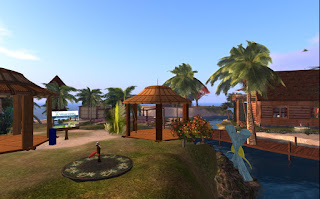 Where InWordz's residents go from here, judging from the comments I've read at least some will be sticking around, either in InWorldz or whatever grid takes its place. But others have expressed that from their point of view, the place they have known is finished. Where they go from here is speculation. It's a fair guess some will head to Second Life, especially those with friends and other ties there. Others will move on to Kitely, the virtual world that overtook InWorldz to be the largest OpenSim world. Perhaps some will move onto smaller OS worlds, or start their own for themselves and close friends. Some will have lost heart in virtual worlds alltogether, either taking a break before going back, or for good. And those with a lot of friends who go different directions may likely end up splitting their time between where they go, whether Second Life, another virtual world, an MMO, etc.

As a resident of Second Life whose main interest in virtual worlds has always been here, to me InWorldz was a smaller cousin of the virtual world I knew. It was place with a less of the hustle and bustle of the more established virtual world. There was less of a variety of things to buy, but I eventually found an avatar I was happy with. And if somehow Second Life went away, InWorldz would be there as a place me and my friends could continue to meet up. Now, it is going away, at best becoming something smaller and different from what we have known. It is an irony that a few years ago, a number of us were thinking Second Life was about to close down and were seeing InWorldz as our next home. Now, we watch as instead for all of our problems we are still afloat, while the place we were considering moving to is sinking. While perhaps someday there may be another virtual world that will take the place of Second Life, InWorldz isn't it.