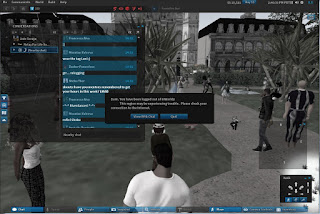 Due to shut down on Friday July 27, the place began going down Thursday night as sims were shut down, and people packed their items away as the management stated they would try to save what could be through an OARS. On Friday, people could still log in at 2:30 PST, but soon after when yours truly was there, the last of the sims couldn't be acessed. From the chatter on Discord's InWorldz group, and the newly created InWorldz Disporia and Relay For Life of InWorldz, it looks like a few people were able to hang on for a while and even relog. but by Saturday July 28 at Noon, the last few people finally lost their grip as the place went completely offline.

There's a lot of sadness, confusion, and more than a little anger. And that's certainly to be expected. While HyperGrid Business reported about merchants in the virtual world being "concerned about perceived drop in users and commercial activity and worry that the grid owners are no longer committed to the success of the grid," the announcement on Monday hit people by surprise. "Why did she not have the funds to pay her bills?" As the co-founder of the place hasn't been around for over a year, he can't say. When another noted virtual world, Avination, went down, the reasons were the company's cash reserves being wiped out by thieves using stolen credit card numbers to buy virtual currency, and then a "catastrophic" data loss it couldn't afford to pay to fix. And this grid had a far smaller population, and numbers of private sims than InWorldz. How did a larger gird that escaped problems on this scale go under?

All we have to go on is Beth Reischl's explanation was that she took out a loan from a subsidiary of Paypal, of which she seemed to be saying she'd taken out loans before to cover development costs, and despite the money being available to pay them, for some reason the company declared "non-sufficient funds" and took out a lien against them. She stated when she called them to resolve the issue, the person she talked with was "very combative" in blaming her for the situation, and further attempts to resolve the situation were fruitless.

The Gofundme campaign Reischl started adds to the confusion. Started in an attempt to try to save the grid, once most of the money was raised, she stated that instead the money would be used to help make a new grid. Why the sudden change? Her words, "What then, what about next month?" was a suggestion the money troubles were pretty deep. The sudden change in the reasons for the Gofundme plus questions as to how the Grid could have found itself in need of a loan made for a lot of confused people, as well as a number of angry ones who suspected something fishy was going on.

Those whom were exclusively or mainly using InWorldz have a choice of where else to go. At least one, Mobius, is taking the moment to offer them a break if they move there.

To every resident of InWorldz,

We are sad to see InWorldz go, and you might need a new home so we at Mobius are offering to InWorldz Residents who want to make Mobius that when you order a region with the coupon code TTL31 you get the region 50% off for each month you have your region until you close it down. This offer ends 9/9/2018. 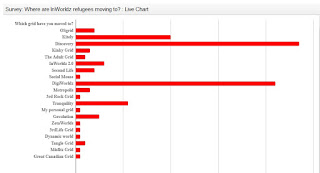 As Hypergrid Business stated, "for people looking for a closed, commercial grid" like InWorldz (or Second Life), which offer greater control over who can get in (such as griefers) and more power to protect content creators, there aren't that many options out there, "The three major closed grids are The Adult Grid, Virtual Highway, and DreamNation. There are also several educational grids that are closed, and some grids run by companies and other organizations that require privacy or control. Almost all other grids are hypergrid-enabled. As of May, hypergrid-enabled grids accounted for 98 percent of all OpenSim land area and 97 percent of all active users." According to a poll Hypergrid is doing, and still ongoing, the results as of the writing of this article suggests the greater shares of InWorldz users are heading to the Discovery and DigiWorlds grids, with Kitely in third place. As of July 28, Hypergrid says in DigiWorldz there have been "more than 250 new user registrations since July 24, and has up up 71 new regions." Maria Korolov's article would give a rundown of many of the worlds InWorldz users could head to (besides Second Life, of course).

Besides how come InWorldz went down, there have been a few questions yours truly has been asked. One is will there be a replacement for the InWorldz grid and when will it be? As of the writing of this article, there's been no date given for the opening of this replacement grid, or it's name. And outside the core group of hopeful inWorldz fans, it's usually being called the possible new grid or plans for a new grid. But there are a couple Discord groups, InWorldz and InWorldz Disporia one can join to talk to InWorldz members for possible information. But at this time, so far it's all speculation. It's current tech department head, Jim Tarber, has stated that he will not be part of any successor to InWorldz.

Talla Adam of the Metaverse Traveller would say, "No date has been mentioned for InWorldz II to open but it will probably be several weeks given the amount of work to do. When it does open, some may well return. So for some of the departing refugees it might be a two-way tip - hard to say really. But there is a lot of bad feeling and people feel put out losing stuff and having to move anyway. The longer it takes to rebuild will also play a part in determining how many will return."

What will happen to the Relay for Life in InWorldz event? In short, without an InWorldz and no date given for the supposed replacement grid, it's a safe bet that the event won't be happening. What is likely to happen is that the event will be moved to another virtual world. Which one this will be is unknown as to how long the decision might be. One can check the Relay for Life of the Metaverse Discord group for possible details.

Could this happen to Second Life? In short, not any time soon. While Linden Lab has been accused of a number of things, rightly and wrongly, over the years, not having a desire to watch the bottom line is something it seldom is. About a little over a year ago, it was suggested the Lab was making 65 to 70 million dollars USD. But while it's finances are sound for now, over the past several years Second Life has undergone a slow but persistent long-term decline in the number of it's sims. While it has been hoped that Linden Lab's recent adjustments in what it charges for sim tier can reverse this trend, the results are still less than conclusive. Even if this trend is halted, there's still the chance a future CEO could pull a series of blunders on the scale of the Content Creator Terms of Service controversy right when someone develops a virtual world that unlike Sansar people can make a virtual home instead of simply an experience. So trying to predict Second Life's future beyond a decade becomes problematic. But unless there's a global catastrophe such as a worldwide economic depression or a planetary power grid failure from a solar flare, it's a safe best the virtual world we know and love will still be around for several more years at least.

As hundreds, probably thousands as the days go on, set up in a new virtual world, and residents from Second Life look outside wondering what happened, no doubt there's many smaller stories to be told. Feel free to send the Newser any reader submissions about your experiences in InWorldz, or your new home.

Posted by Bixyl Shuftan at 7:00 AM