In recent months, interest in the InWorldz virtual world has been growing. The majority of people visiting the place have been from the larger Grid of Second Life, often annoyed with updates that their computers have problems with or policies from Linden Lab that they do. But without anyone or anything to help you out, it can get pretty confusing on how to go about there.

Fortunately help arrived in the form of the InWorldz / Second Life Connection Center. This group in both grids, with locations in both, helped residents from the older grid get started and go about on the new one. It also helped organize a public discussion in Second Life about what was true and what wasn't about InWorldz. 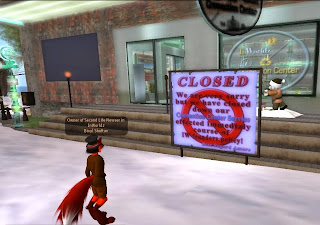 But without any warning, on December 8 Amore Crux, the owner of the Connection Center, suddenly announced the group was closing. While the groups themselves have remained open, many of the staff have found themselves locked from posting, and most of the virtual locations were deleted. Zia Larina, the former manager of the center, was caught off guard like everyone else, and made a public statement to help clear up some misinformation going around. There has been much speculation as to why Amore closed down the place, and the reasons are still unclear.

The group's sudden closing meant that residents commuting between the grids would be without reliable help. Nydia Tungsten of White Vixen Enterprises, which had cooperated with the IW / SL Connection Center, made the decision to found another group to take it's place: The Grid Walkers Welcome Center. Zia began helping her out from the start.

"We started the Grid Walker group to address the need that was made by Amore's announcement and then closure of all the Connection centers," Zia explained, "The volunteer coaching will continue and the coaches are willing to keep helping people. There is a connection between both worlds and a group we can stay in touch with each other here or in SL. I feel sad that the Decisions that were made. In the end playing our game is for us and being able to do that with help and laughter makes playing and working in both SL and IW enjoyable." 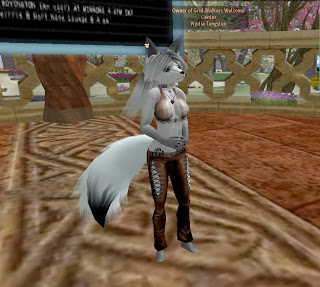 At the Angels Foxshire sim in InWorldz, managed by White Vixen Enterprises, Nydia explained, "We were planning to make this area a form of welcome center already, when we found Zia and Amore. I thought to join with them in promoting a cross grid community, that is why WVE and IW/SL got together to hold the Q&A meeting in SL. I was blindsided by the closing of their welcome centers then found out it was a decision Amore had made on his own because of.... "differences"... he had with the founders, his decision affected ALL their members and left them out of the loop as to why and what would happen now."

"The idea behind the group was too important to let hang in limbo, so together with Zia we have formed 'Grid Walkers Welcome Center,' leaving it open for not just SL and IW for for ALL grid visitors, we have a Inbiz ATM here now for those that need it, and it should also be said that there was NO disruption in ANY inbiz services."

Asked about InWorldz's rate of growth and if the new group can handle the influx if numbers continued to grow at the level, Nydia stated, "I think as the grid grows our group should grow and the number of guides along with it, I have every confidence Zia will handle and train our guides so they can handle the new arrivals as then get here."

So once again, Second Life residents needing help while getting themselves established in InWorldz have a place to turn to.

"In the end, words of intention are all fine. It is the actions that we do that people will grow to trust," Zia commented, "not our words, but our actions and our consistency."