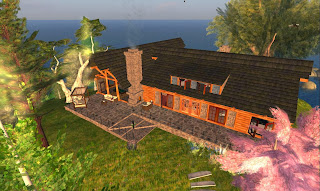 "Welcome to my hidey hole," she greeted me.

I thanked her, and after a little talk, I asked her, "So what do you do here in InWorldz?"

"I am one of the partners,"  Elenia answered, "Where Tranq handles the day to day development of the grid and the developers, I handle the day to day administration and support."

I then asked her, "How did you get your start in virtual worlds?"

"Through Second Life actually," Elenia told me, "I remember watching it on the news one night, and I had long thought it would be cool to see a world where people could create their stuff and use it. Then a couple years later, I heard about SL (again) and had to go check it out. I didn't particularly care about the social aspects of it, as I'm a tinkerer and someone who likes to know the mechanics of something. So I dove into learning how to build. My big goal was to do furniture, but I have this obsession over making things look real, and this was just as sculpties were coming out. With the prim market of SL, my builds were too 'prim heavy.' It was kind of sad." 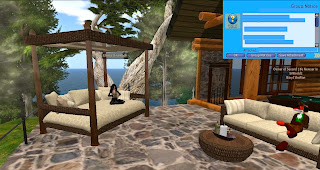 "So, I was talking to my friend, Bob Bunderfeld one day about this, and he pointed me to the metaverse at large. Tried another grid, and that didn't pan out, so I said to my friend Legion Hienrichs (who is also a partner) that I thought we should test out OpenSim and getting it up and running on our own."

"That's the date you set up your Grid?" I asked, "How did things go in the first days?"

Elenia laughed, "Not bad actually! Considering we were on GoDaddy barebone servers, and had to find a real host. Which meant a couple of re-installs of the system. After a while, we talked to friends who logged in and next thing we knew, what we had started as our own little building spot was quickly being asked for regions as well. (It) blossomed into a business before we knew it, albeit a non profiting business. But a business nonetheless."

"As time went on though, we quickly realized the limitations of the systems and the code and that we'd need a professional developer to handle it."

"How did you go about getting one?" I asked.

"Well, had a couple who tried," Elenia answered, "but I had put the word out that we were looking. One of our residents, Scotsgraymouser Janus knew some of the IBM folks over on SL, who knew Tranquility and referred him to us. Him and I talked via emails and then he worked on a particular module for us. Next thing you know, he was on board full-time and then a partner in the business."

"About when did a number of people start coming here?" I asked, "Is it true that "the first thousand took almost a year, the second thousand just bait over a month"? 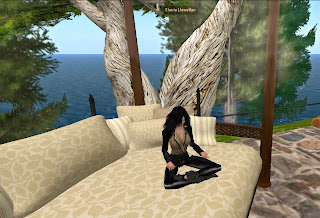 Elenia pondered her answer, "Hmmm, our first year we were pretty obscure. Sure we had a lot of people take a look, but it really started up after we got the economy going and groups working properly. But yes, that story is true as far as the second 1k took just a month. I don't tend to look much at registered users though to be honest unless I'm looking at the retention numbers. I look at people online, region sales and I'z buying/selling for real numbers on our growth."

"And when would you say that started growing?" I asked.

"We go through growth spurts," Elenia told me, "usually during the spring and fall, then that churns down during summer and fall. But our first real growth, unfortunately was from SL's handling of the homesteads. Then our next big growth spurt was recently as the TOS started to really get discussed which also coincided with our full PhysX rollout for vehicles."

"Now that we've been around for almost 5 years though, and have some really long term customers and residents, I think people are feeling comfortable with the idea that we are working hard to make a better virtual experience for users, and not going to disappear tomorrow."

"What have been some of the challenges in operating the Grid," I asked, "other than what you mentioned?"

Elenia thought over her answer, "Mmm, we had the technical issues of course of getting more and more avatars onto a region. The prim limits were a challenge. Physics was a challenge. Our scripting engine was a great challenge, and of course inventory fetching for users. On my side, biggest single challenge was fraud which we dealt with. Then keeping up with the grid code changes to keep support rolling as it should."

"Finding enough time in the day, is still a challenge while we balance real life and get more help. Those I think now, are our single biggest challenges."

"InWorldz used to be close to the size of one or two other Grids," I reminded, "Today no other virtual world is as large, except Second Life. What do you see as the reasons people choose InWorldz over other grids?"

Elenia answered the reasons for their success as, "Well, as I mentioned we do have longevity now almost 5 years later. People know our name, they've heard it a few times over the years. We've worked hard to provide a really great stable environment for our users, give them support, and outside of that, I think our biggest single positive is that we do listen to our residents and change things if we find a good way to do it. They feel that they are part of the world with a voice, that this IS their world and that's exactly what it is. Without their voices or opinions we can make changes all day long, but it has to be for the right reasons. They are the users and they know what they want to make their world into, we can only guess. They are our greatest source of inspiration."

"And, our biggest source of advertising! I can't count how many times I've heard from a new resident 'my friend told me to come check it out.' "

I then asked, "What would you say have been some of the best examples of resident creativity here?"

"Oh wow, where to start without showing favoritism?" Elenia needed a moment to answer, "I love our art shows, I love seeing our residents fantasies coming to life on the grid. It's almost a little insight into how they work and think. I love our events we sponsor. There's just so much talent out there, it's hard to define as best examples. I think the best example though, if I have to give it thought, is not individual creations, but individuals able to create now. Where before they felt constrained. To see them tackle things they've always wanted to try, and were afraid to do so." 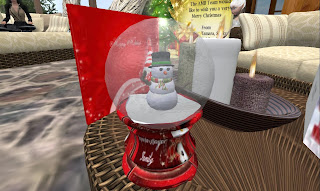 "I have stuff in my inventory from the very early days of the grid still, of residents who wanted to show us that they were building and creating and thanking us for making it available to them. Those pieces, while old and beginner stuff, is really precious to me." She then began rooting through her inventory, putting objects on the ground, "And then I get this stuff from residents (grin) … Hey now I don't need a Christmas tree! .. Awwww a tiny snowglobe!"

She turned back to me, "And this is why I can't really give a best example.... I look at some of these gifts, people I've known for a long time and where they first started at. And they've come such a long way. Which is what we wanted, we wanted to free people to be creative, to test themselves, to learn and most of all, to love doing it."

I was briefly interrupted in real life, but Elenia stuck around until I returned. I then asked, "Will there be any special event for InWorldz on it's anniversary?"

"We are working that out as we speak as a matter of fact," Elenia answered, "laying out the plans for the 5th B-day bash in April."

I then asked, "Will there be any kind of event for when InWorldz reaches 100,000 residents?"

"Hmmm, they like to get together to have on the fly parties on IDI and welcome in the Xth user to log in." Elenia told me, "We encourage it and let them have fun on IDI. If I know our users and mentors, they will be watching that login screen like hawks. And next thing you know, there will be a dj, a disco ball, and all sorts of crazy going on." She giggled.

After a chuckle, I then asked, "So besides this, what are the future plans for InWorldz?"

Elenia responded, "Well, now that we've gotten our big portions handled and taken care of and feel we're on a more equal footing we want to expand this technology. Tranq has been working on InShape and getting that completely tested and working right. We've got some feedback there and then I'll start pushing that forward. We always want to look at ways this technology can benefit our lives, and we see a lot of great opportunity there for expanding it out for more users."

"We want to move more into delving into what PhysX can do in relation to the avatars and clothing and hair. We have a lot of good stuff we want to get going, but it all works hand in hand with growth so we can achieve those goals."

"Was there anything else you wanted to add for the readers?" I requested.

"A huge thank you to our users." Elenia smiled, "It's because of them that we do so much and keep going and for being our inspiration."

"Thank you for your time Elenia."

I then bade the InWorldz founder goodbye, and we both went our separate ways.

On a personal note, although I requested members of Linden Lab to talk in the past, none would so much as answer me. I never saw my predecessors James and Dana interview a Linden either. This marks the first time Second Life Newser has sat down with one of the founders of a Grid for a talk.

Perhaps this willingness to chat with residents on their terms is one of the reasons some from Second Life have been checking out InWorldz.