I've been around, I just grew tired of writing for a couple years and thought I might pick up the digital pen again. 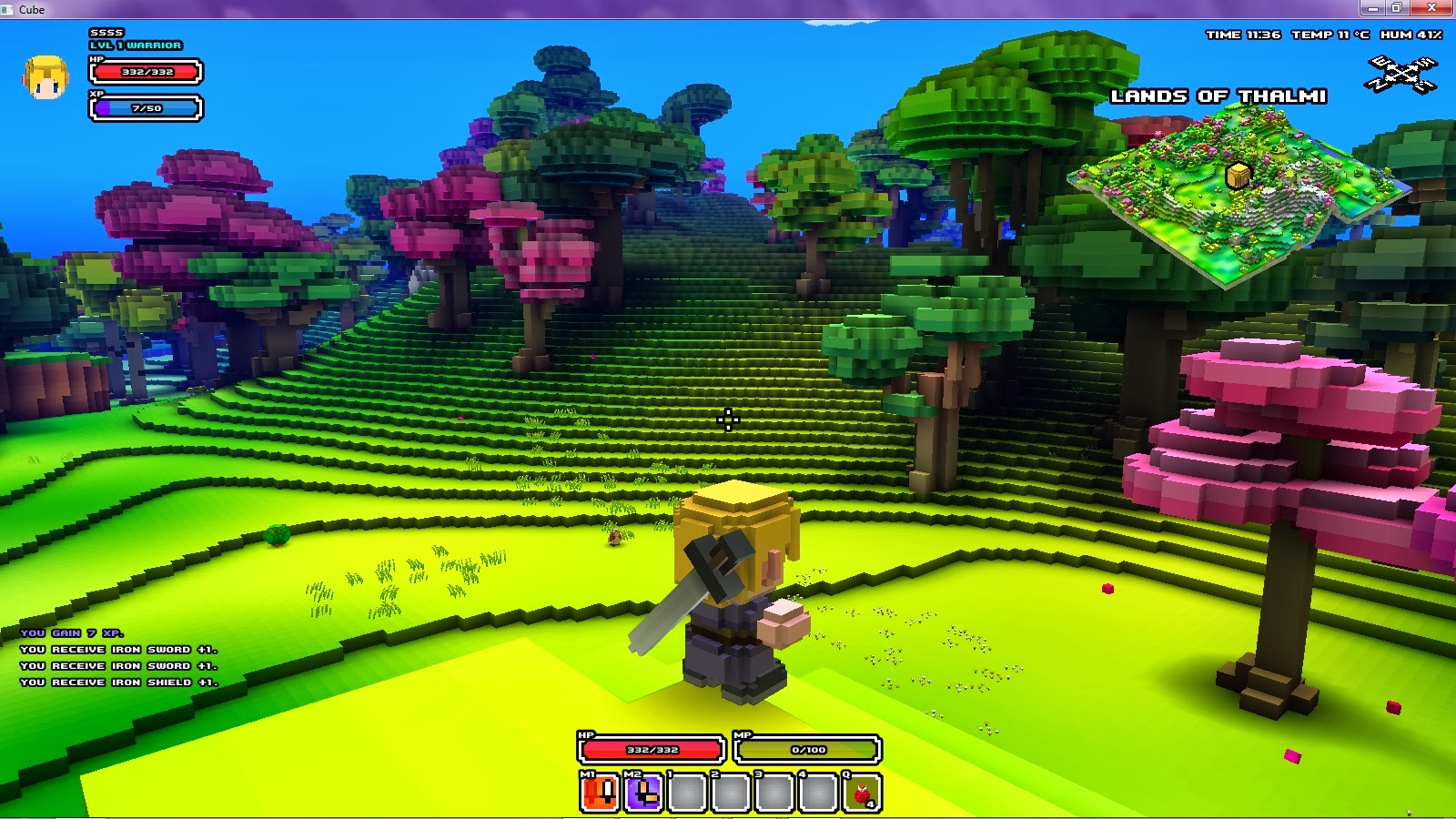 I recently heard of a game out on the internet called "Cube World" (https://picroma.com/cubeworld), marketed as "a voxel-based exploration RPG." Run by two people, it at the outset looks like some kind of Minecraft spinoff, but after I bought the game, I found that nothing was further from the truth. There's no building one's home or a base in Cube World, instead resting in inns and at various campsites found along the course of one's travels. It's very "pixel-ish" (but that's what one gets working with voxels, not that that is a bad thing) and looks like something Minecraft might be if it were done in a colorful, more basic style.

There are multiple races and classes with small skill trees (which I haven't messed about with any yet); I ran about as a human watching the procedural landscape generate for a good two hours instead. Races include Human, Elf, Dwarf, Orc, Goblin, Undead, Frogman (which looks like Frog from Chrono Trigger, a direct homage perhaps?), and Lizard Man, though I couldn't see any special racial bonuses between the various races. There are also several classes (Warrior, Ranger, Mage, and Rogue) each with two specializations (Warrior has Guardian and Berserker for example) to play around with. 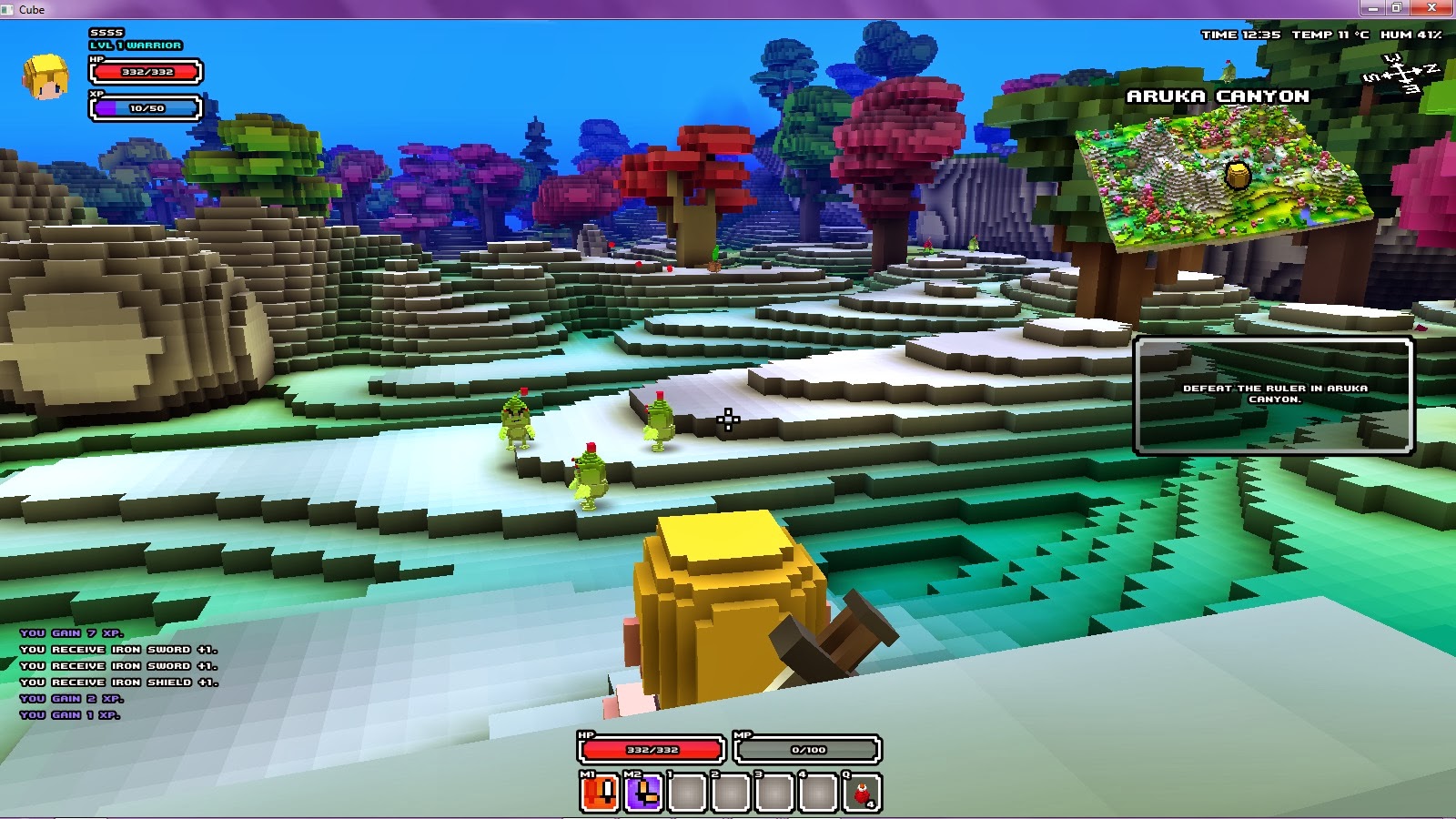 Upon creation of a character, one enters a seed number (worlds with this seed number will always be alike, same as Minecraft) and a world name though I found out negative numbers can't be used as a seed, nor can word strings or anything like that. Hitting M brings up a map revealing the chunks of the world as they load up, with a town never far off, and battlegrounds the further you go from where you start. Get close enough to a battleground or "boss" area and you'll get a quest to wipe out the ruler of that area, which is easier said than done. Movement is with WASD (No key remapping, which was a turn off for me, I *loathe* WASD movement) and clicking the mouse buttons swings your weapon. There are multiple types of enemies to beat on, from bugs to animated onions to "biters" to boss monsters like ogres, and since you have to manually target or move to dodge, surviving such encounters is far harder than it looks. If you die, you respawn at what appears to be a statue of some kind somewhere nearby. 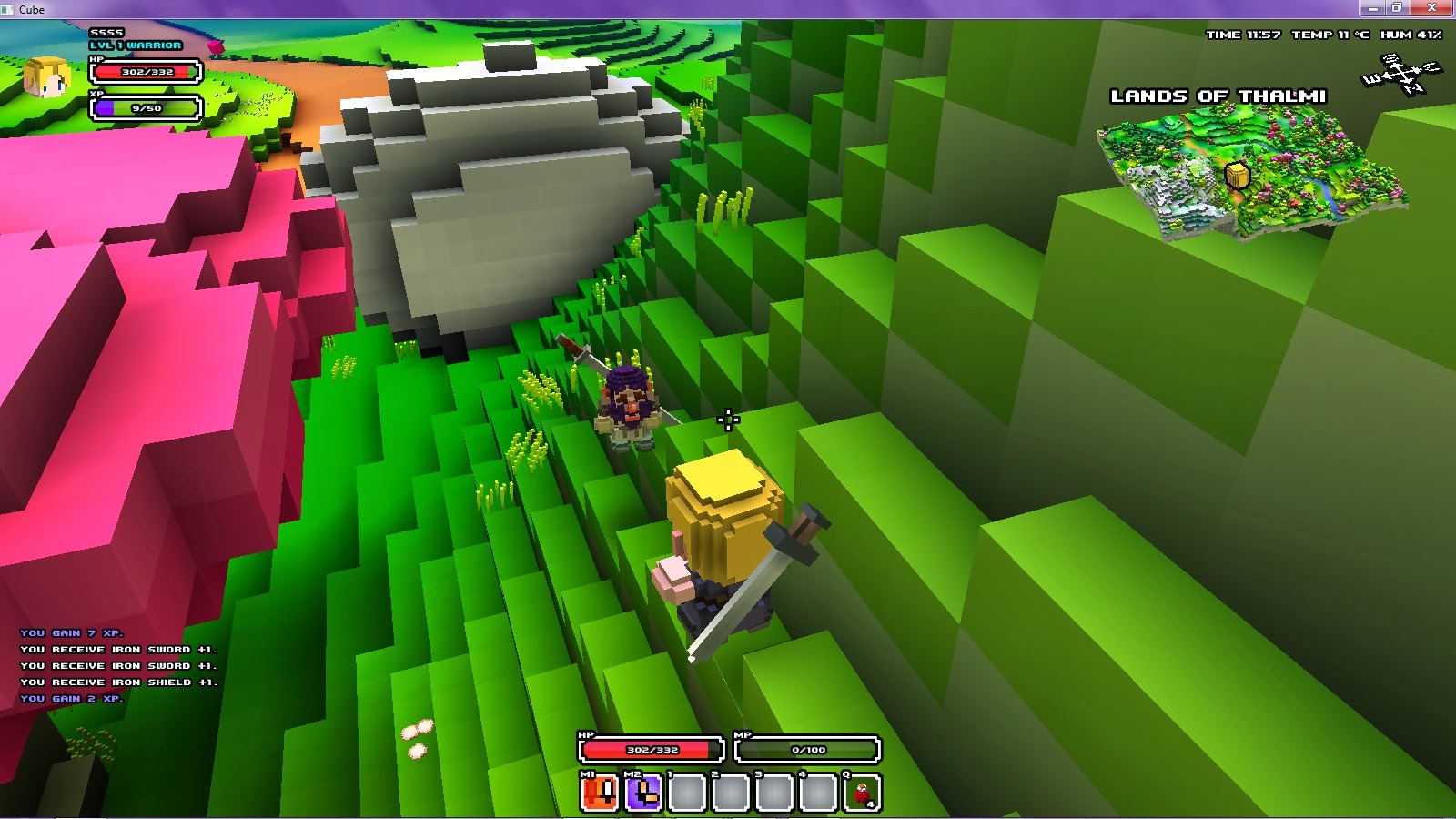 Ok, wandering around hitting monsters is fun enough, and there does seem to be crafting involved (which is something I haven't gotten involved with yet in any great detail). Towns have districts where you can trade, sell, craft and whatnot, so living out of them is very viable as you work to gain levels and become more powerful. Still, as I played it more and more I found myself asking "This is all nice and pretty, but what's the point?"

Cruising the forums briefly, I asked a few questions about the game having just bought it and all. There's no building of one's home or a base (yet --- looks like a planned feature). There are multiple quests (and what appears to be daily quests, as the game has an internal clock) for treasures and "Platinum Coins". I'd had problems with multiple mobs at once (a starting player is very weak) and while wandering there are often wandering parties of neutral or friendly NPCs. These guys, I learned, won't help, but if I lure monsters to them, they'll beat them up for me. It looks like there is a pet system (as I'd asked "how to deal with multiple mobs at once in a "boss like" area --- the answer is to tame a pet, which I have not yet figured out). I was surprised when I asked if I should have waited until more features were added and someone said "yes." There's no "ending quest" to beat the game, no "hardcore mode" for if you die you lose everything (maybe I'm too biased toward permadeath now). 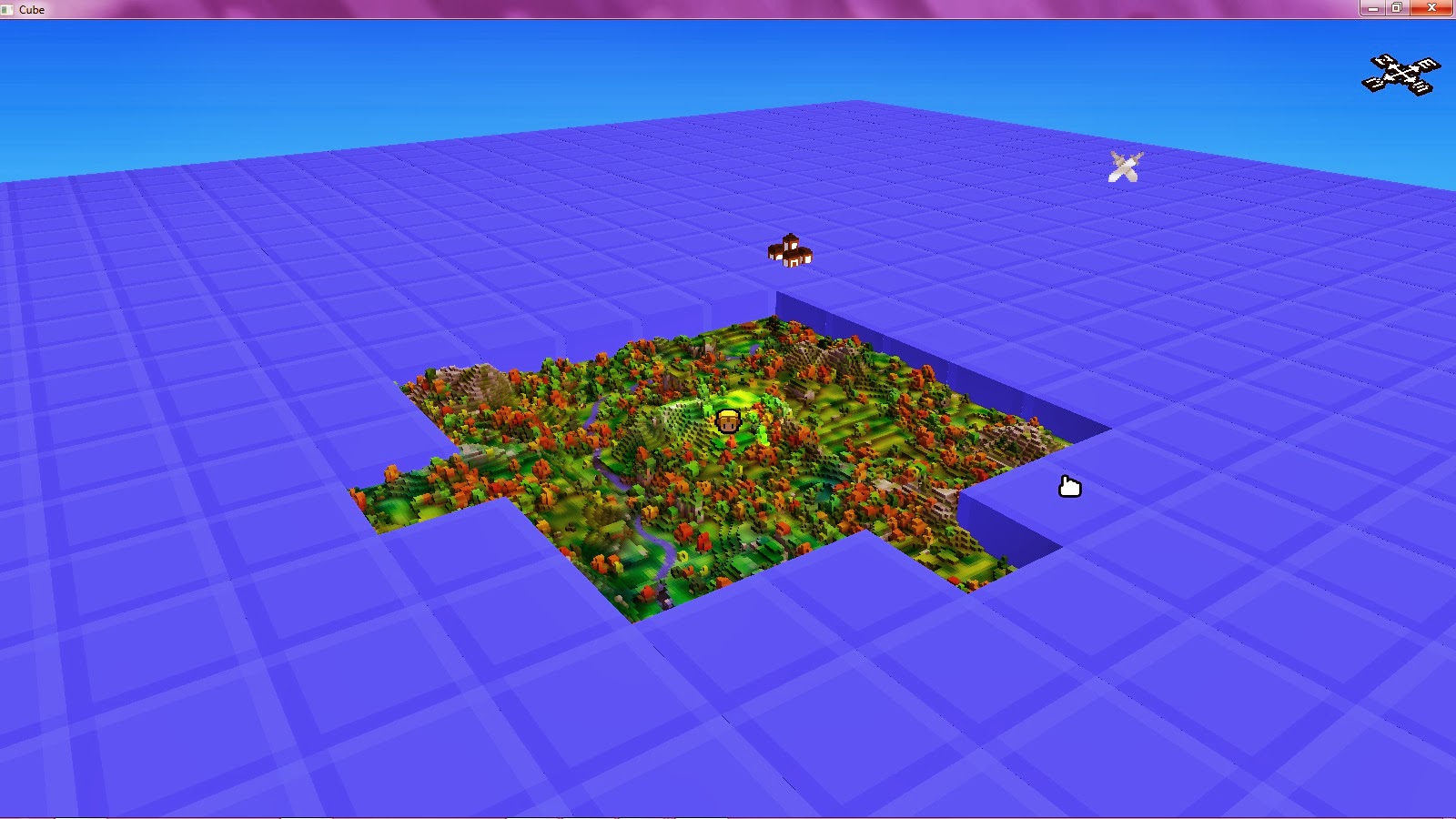 Glancing at Wikipedia, it says that the game started in June of 2011 (by comparison, Minecraft would release its full first version in November that same year). Now I'm thinking 2011 up until now in 2013-2014 is more than enough time for multiple updates, but there doesn't seem to have been many at all. To be fair, there's only two people working on this: the creator and his wife. By comparison, the award-winning Cave Story was one guy over five years. I ran about the Cubeworld world for a good long time and thought "This could be fun, but there needs to be something more." There ARE multiplayer servers, so I hear, but I did not go looking either on the forums for newbie friendly servers or seeking out my own via google or anything.

So, after playing the game for about two or three hours, what do I think? This game has *potential*. I think Cube World could give Minecraft a major run for its money if it had more updates, more things to do, and more depth (or maybe I haven't tried hard enough, I've barely scratched the surface of the game so far). Its bright, colorful style is a breath of fresh air from the constant PVP and griefers of Minecraft. I think with the proper funding and if the creators had a proper programming/content team, they'd have a real hit on their hands that could compete on the level of Minecraft's popularity. I'm not even kidding. I did get constantly annoyed at getting killed so easily when I first started, and I'm not keen about no remapping of the keys, and throughout all of this I keep getting a "He's trying to reinvent the wheel" vibe here (but I think we can blame being overshadowed by hits such as Minecraft for that one).

I'm going to give Cube World three dragon hoards out of five, with the door wide open for a full 5-of-5 hit, because oh gods so much potential lies untapped here if done right. It's cute, bright, colorful, and probably has a lot more depth to it than I've tried looking for. But until there's more of an end goal/quest, more biomes, keymapping, and other things (besides the hang gliding and pet riding, two things I've gotten nowhere near trying yet), this game, while inexpensive, is going to live in Minecraft's shadow undiscovered.

Cubeworld is $20 USD, and can be found at https://picroma.com/cubeworld (though a free account is needed to be registered to purchase the game).

Xymber Slade
Posted by Bixyl Shuftan at 6:00 AM