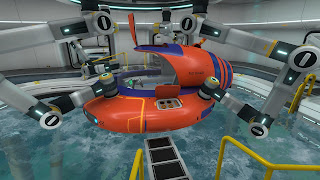 I have never been one who was much into video games, but I started to watch the You Tube channel of The Mighty Jingles, ex-British Navy guy.  I started playing World of Tanks, then World of Warships, but they they had issues, plus being multi-player games, you were at the tender mercies of your team mates, good or bad.  I then tried X-COM, but even though it was single player, I was having a hard time with it.  I guess my PC wasn't up to the task, or I wasn't.  I was getting frustrated.  Then I finally found a game I loved: SUBNAUTICA, a single -player, survival game.

What is SUBNAUTICA?  It is a single player, game of survival.  Your spaceship,  the Aurora, has crash landed on an alien water world, Planet 4546B.  Your Lifepod is damaged and you have no tools and limited supplies. The PDA you have gives you information on how to build the first set of basic tools you will need to survive, but you need to get out and find the resources, on the ocean floor.

You can play the game in one of 4 different modes.  One: Survival:  Here you have to watch your air, food and water, as well all the things around you trying to kill you. Freedom:  like survival only without having to worry about food, or water. Hardcore: like Survival, but only one life, you die, you start over from scratch.  Creative:  No limits, all blueprints at the start, can't die, just explore, build away..  I tried this one, got bored with it, no challenge. 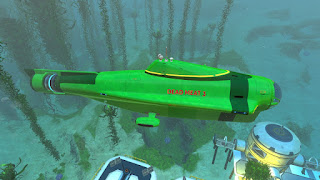 So what you have to do to survive is find resources to start building to stuff you need to advance the storyline.  Limestone you will find, Titanium and Copper.  Sandstone contains Lead, Silver or Gold. Later when you locate Shale they will contain Lithium and Diamonds.  Many other needed resources will just be out in the open waiting to be picked up.  Once you get your Scanner built, scan everything, it is your best friend. Next tool is Repair Tool, that one is tricky, since is requires Cave Sulphur.  This resource comes from the nest of a very cranky fish. You get close to them, they charge you and BLOWUP in a cloud of acid, which hurts!  If enough of them hit you at once, you can die! so pack lots of med packs and use them.

There are vehicles in Subnautica, but you need to find the fragments of them, in order to build them, Seaglide, Seamoth, Mobile Vehicle Bay, and Cyclops.  There are many other items you will need badly in the game, Laser Cutter, Battery Charger, and you will have to explore wrecks to find them as well as Data Boxes that have complete blueprints to other equipment.  There are also lots of PDA's laying around with data on them, try not to miss any.  They will in or around wrecked Lifepods, or wrecked pieces of the ship, abandoned bases. Enough for now.  Check out Mighty Jingles Subnautica to see more about the game.  Be warned though, Very addicting.  Game is available on Steam for $25.